Extending Zone 9 to another bed

With the small front yard area between the sidewalk and the driveway dug up, and put back, we can turn to the irrigation system.  We have 3 areas to consider -- the top around the Oak tree (Fuzzy), the middle, and the bed by the garage and the front porch.  The bed is likely to be different from the other two areas, and we have another bed on the other side of the sidewalk, next to the house, so it seems natural to add the front bed to the already existing Zone 9, and then use Zone 11 for the other two areas. 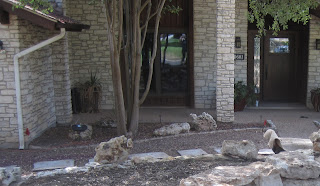 The main difficulty is that the sidewalk is between the two beds.  To extend Zone 9, we will need to tunnel under the sidewalk to run a pipe to connect the two sections.

First we did down on the "new" side of the sidewalk, to expose the pipes that we want to connect to. 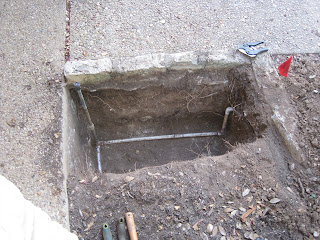 The pipe going towards the street is where the water used to come in, but now is just disconnected.  We remove it. 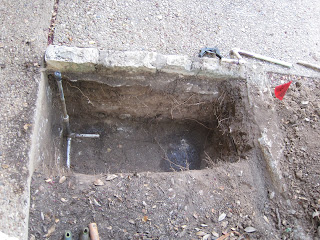 On the other side of the sidewalk, we have a sprinkler head (the end of Zone 9). 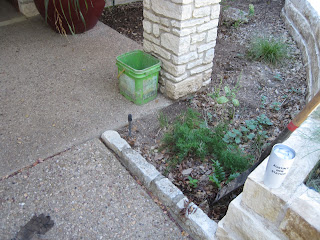 We dig down to find the actual pipes. We have to be careful here not to disturb the plants. 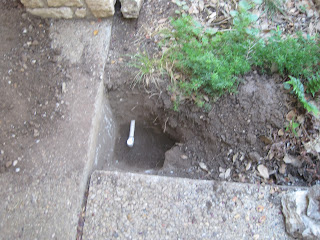 Getting under the sidewalk seems to be the main problem.  Our model of the sidewalk is about 4 to 6 inches of concrete, then some dirt they put down as a base for the concrete, and eventually, construction debris or the native mix of rock and dark clay soil.  But it appears we have only dirt, and digging thru that, we hit concrete. 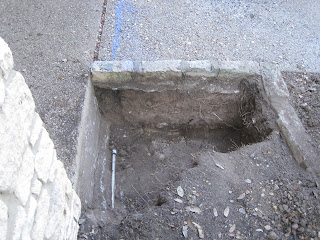 Our view of the sidewalk is obscured by the stone edging of the bed.  If we remove it, we can see the actual sidewalk structure itself.  So we do. 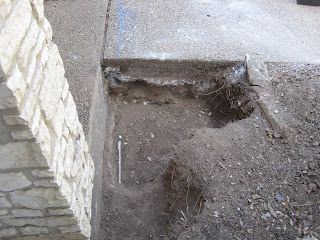 With the stone edging gone, we can see the sidewalk structure clearly. 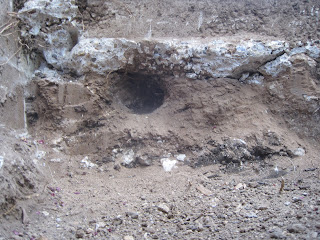 Our basic model is correct, although it may be 8 to 10 inches of concrete.  Then a layer of light brown soil (sandy loam?) used as a base -- about 6 to 8 inches.  Then probably construction debris, but whatever, it's rocky.

So our best chance of getting thru is in the sandy loam.  But how to do that?  After much investigation of masonry core bits, earth augers, and such, we realized that the sandy loam is very soft and decided to just use a high pressure water stream.  We used our pressure washer and was able to get thru more than 2 feet of the dirt.  Then putting our six-foot pry bar in the hole and using a sledge hammer, we were able to break thru to the other side. 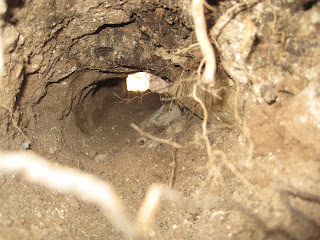 The pry bar was useful to dislodge the large rocks that had been buried in the sandy loam, and to enlarge the hole so that we could slide a 3-inch PVC pipe thru it. 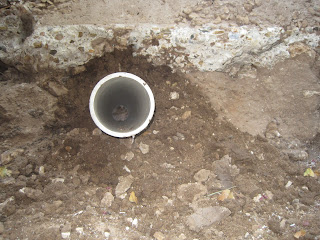 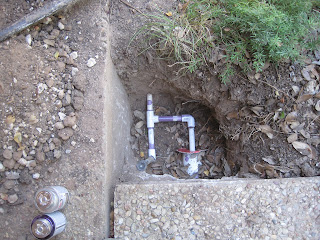 and connect it to the 3 sprinkler heads in the bed next to the garage. 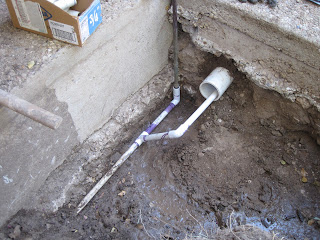 We had to cap off the end of the new section of pipe, in the bed close to the garage. 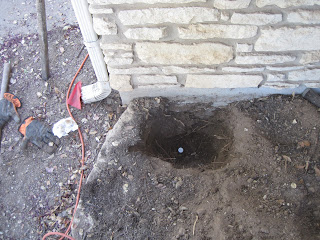 And, it turns out, there was a leak in Zone 19 that I had to fix too. Over by the gas meter, the line that ran from the heads near the house across, under the River of Rocks, to the wall at the neighbor's property line.  That line had come loose -- it looked as if when the new Zone 9 layout was done in August 2019 this line was near cemented in place; the pipes were just fitted together. 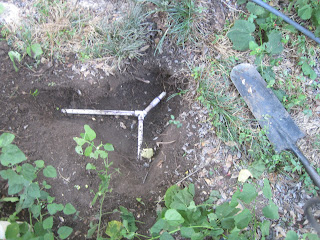 Once that leak was fixed, we could test Zone 9 and it worked as expected, allowing us to shovel the dirt back into the holes on both sides of the sidewalk. 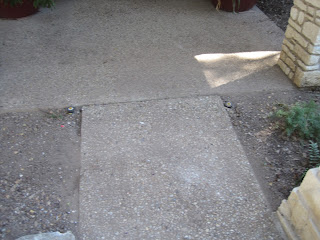 Zone 9 now has about 19 heads on it, which seems like a lot.