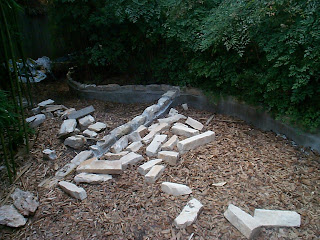 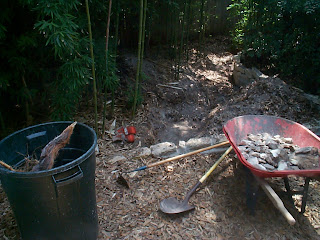 Our solar system was in the direct path of the hail storm of March 25. Almost every house in our neighborhood is having its roof replaced. The hail was literally golf ball size. We took a direct hit on one of our 24 solar panels. Davis Elementary School, just blocks away, has a much larger solar system, probably twice the size we have. Two of their panels were visibly damaged by the hail.

Immediately after the hail storm, I tried to contact the company that installed my system to have the panel replaced. Our system was installed in August, 2006, but the company is no longer here in Austin. Of the eight companies that I worked with in getting our solar system, only two are still on the City's directory of participating companies now. Once I was able to find another company (Green City Austin) to work with, we found that the panels I have are no longer being made. The panels are different sizes with different specifications; it's not clear if how they can be mixed. We eventually found a panel in a warehouse somewhere that had been forgotten about and had it shipped here.

When they brought the panel out to install, they found that it was wired differently, but were able to use parts from the broken panel to re-wire the new panel and install it.

We have 24 panels, arranged in two rows of 12. Each row is electrically separate, so losing one panel meant that we were generating only 50% of our normal power. Think of it like Christmas lights -- when one goes out, everything in that strand goes out. But replacing the broken panel did not improve our power output. Testing the broken panel, once it was removed, showed that it was working fine. The glass cover was broken, but not the silicon -- it had continued to generate power. (Of course, it was not thought to be working when it was removed, so it's really not functional now).

But why then were we only generating half power? Since January, the City has been printing how much we generate each month on our utility bill. Those numbers have been consistent, but it turns out, they have been at 50% for months. How long I can't tell. When the system was installed, I carefully monitored it for several months, recording the power generated every day.

But that proved really boring ... another day, another 14 kilowatts. The system requires no maintenance. I don't need to add gas or check the oil or change the filter or mow it or water it or anything.

Or so I thought. After a couple hours of investigation, we determined that something -- most likely a squirrel -- had chewed thru one of the power cables. That short circuit was what was causing the problem, not the hail-damaged solar panel. It turned out they had chewed thru not just one cable, not two cables, but three separate cables.

So I have learned several things from this episode:

1. Solar power is still in its infancy; companies will come and go with great frequency. Any customer needs to be prepared to switch companies as necessary, or take over maintenance and repair themselves.

2. While solar systems are very hardy, they are not indestructible and they will not last forever. A solar system needs to be designed to be maintained, monitored, and repaired.

3. The parts that are available now will not be available in the future (not unlike just about anything else in life). So if panels need to be replaced, they will not be compatible in size or appearance (at the least). On a long-lived system (these are supposed to last 20 years or more), expect it to become non-homogeneous -- not all parts will be the same.

4. Even a system that requires no maintenance will need regular monitoring.

Posted by crazyjim at 7:24 PM No comments: