Once we had the stump out of the ground, we were able to dig down below where it had been.  We found a layer of rock -- limestone rocks mixed with dirt.  The limestone was fairly flattish rocks for about 4 to 6 inches, and then we hit bedrock. We dug out the entire hole that we had needed to get the stump out. 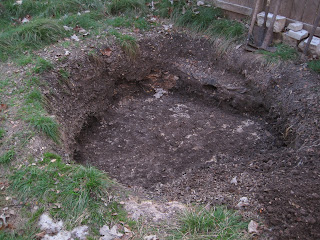 The question then is what this layer of bedrock consists of, and how deep does it go.  An hour of jack hammering showed the limestone bedrock to be hard and solid at least 6 to 9 inches down.  It does not break easily, but with repeated work can be reduced to dust and rubble -- taking a lot of time for very little result. 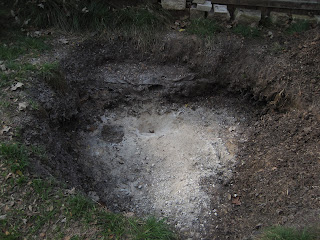 As it is we have a pit that is 24 to 30 inches deep, 6 feet across, which seems as good as we can do without a major effort.

At this point, we can fill the pit back in.  We want it to be good soil that will be easy to work with, and have plenty of composed material for whatever is planted.  And we can easily bury anything we need to get rid of.  So we rake up all the seed droppings from out Chinese Pistache tree and put them at the bottom of the pit. 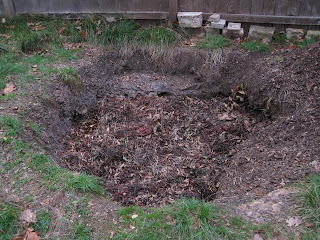 That was 4 wheelbarrows full of droppings.  Then we start shovelling dirt from the pile into the pit.  After about a third of the pile is in the pit, we spread leaves over the dirt. 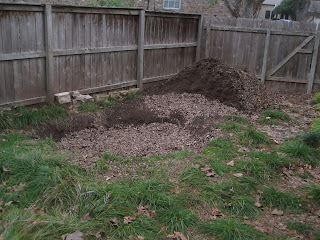 After a couple more days of shoveling dirt from the pile into the pit, mixing in leaves at intervals, we have the pile gone, and the pit filled in. 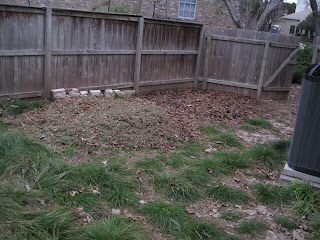 Actually, the pit is more than filled in.  The dirt leaves a mound about 9 inches high.  Since all of the dirt that used to be in the pile came from the pit, plus we pulled out the stump and a lot of rock, it seems that over time, the dirt will settle and probably be lower than the surrounding ground.