Digging up the remainder of the Front Yard, Part 2

We started digging out this section of the yard back in May 2022, but I developed back problems from the work, so I didn't get back to it until late July.  But it stayed the same as when I left it (other than a bunch of leaves that fell in the hole). 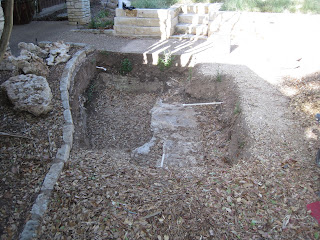 The first thing to do was take out the little corners that had been left, next to the sidewalk and diagonal from that, to make it a simple rectangle. 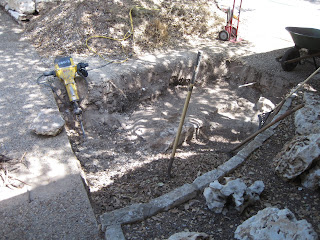 Then apply the jack hammer to break up the rock shelft 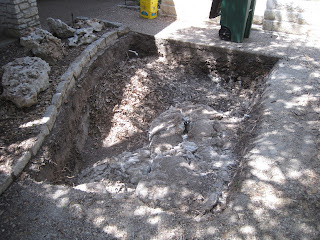 and clear all of that rock out of the hole. 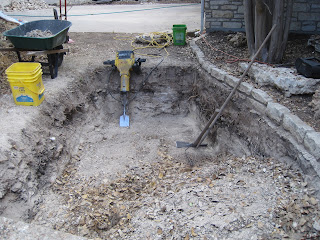 Then use the jack hammer to break up the next patch towards the sidewalk.  First break up the top dirt layer of about 8 inches, and scrape it down into the part of the trench that we have already dug. 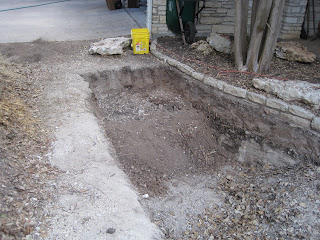 Then take out the 8 to 9 inch layer of construction rubble that was buried when they built the house. 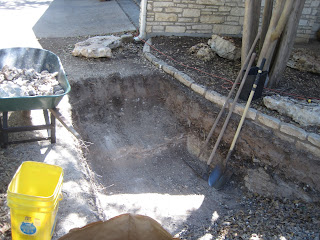 And finally break up and remove the foot or so of rock under all that, to get down to what we are using as the new bottom of the trench. 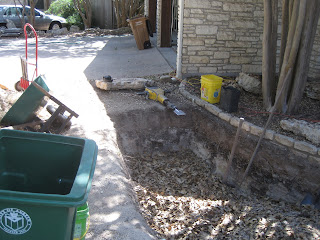 And repeat it once more to get all the way to the driveway. This takes weeks, and produces lost of rock to be gotten rid of, plus some relatively rock free dirt, which we can mix with leaves and grass and re-use.  But we have to put it someplace while we work.  So we put it "behind" us, in the trench.

We notice there is a spacer in the sidewalk, about as close to Fuzzy as we would want to be.  And another spacer in the driveway a bit closer, but roughly again, as close as we would want to be to Fuzzy, to protect the roots.  So we run a string line from one spacer to the other, to define the totality of the space that we want to dig up here -- how close we can get to the tree. 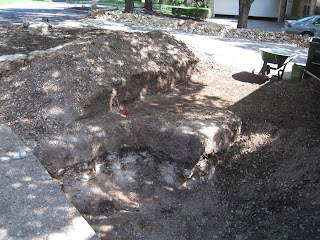 Note that we have to shave off some of the dirt that we pile up when we were first starting to excavate.

Then we can again start digging it up, first the dirt, then the construction rubble, then the solid rock, working our way from the sidewalk towards the driveway.  Rock gets put on the driveway to be gotten rid of later. Dirt gets mixed with leaves and grass and piled up in the trench where we first excavated, next to the bed in front of the house.

July turns to August, which turns to September.

We continued the trench across the front yard. 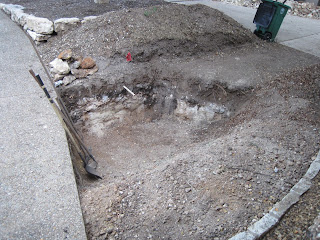 First we remove the top dirt layer.  This exposes the construction rubble. 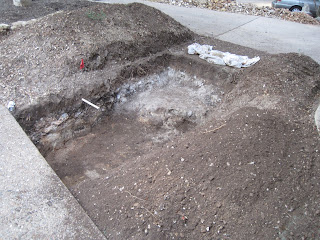 And then go thru that and the underlying rock, to get the next section dug out. 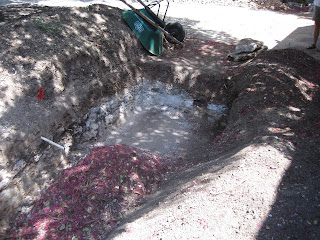 And finally repeat this same process on the last chunk of dirt, next to the driveway. 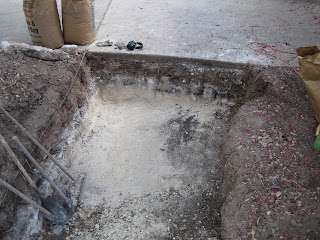 This gets us 30 inches down. 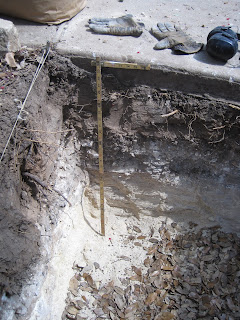 But having finished that, we can then put the dirt back in the hole.  A coupld of days shoveling from the piles on either side into the hole, and we get a relatively smooth patch of dirt back. 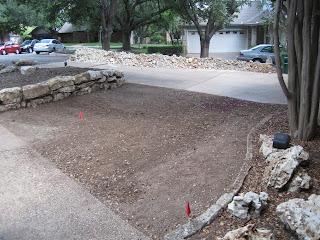 The bottom two-thirds of this patch have been excavated, and we expect the dirt for that part to settle over time.  After all, all the rock lined up along the other side of the driveway in this photo (and more) was excavated out of this lower section of the front lawn.

Posted by crazyjim at 2:21 PM No comments: