Repainting (the outside of) the house

The house was painted in August 1993 and September 2002. While overall it's still in pretty good shape, there are places where it is clearly in need of a touch-up.

The house is mostly stone, white limestone, and so it's really only the trim that needs to be painted.  Originally, the stone was only on the first story, and there were 4 significant triangular eaves that were wood, and needed painting.  I've had two of those (over the bedrooms) removed and replaced with stone all the way up, so that reduces how much needs to be painted.  The main places that need painting are the triangular space over the garage, the areas over the garage doors, and the area over the breakfast bay window.

We had originally thought we would spray paint these, but our experience with the spray painter on the back porch suggests that might be at least as much work, so we resort to the standard brush.  Most of the painting was done with a 3-inch polyester brush.  We used a 1-inch trim brush for the trim right next to the stone, where we needed more control.

We started with the triangle over the garage.  This seemed easiest, since (a) we could stand on the roof, and (b) any drips went on the roof that (c) are hard to see, and (d) should not affect the function of the roof, so we did not need to mask before painting. 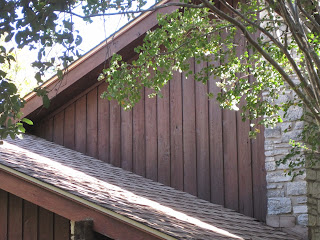 Then we moved to the side of the house, over the breakfast bay window. 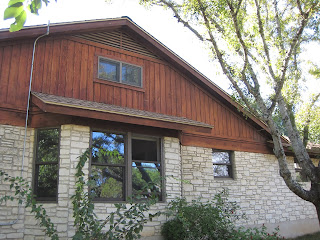 While some of this area could be painted while standing on the roof over the bay windows, we also had to learn to paint using a ladder.  Paint, move the ladder, paint, move the ladder, ...  And we needed to mask the stone, to make sure that we did not drip on it.  This involved plastic sheeting stapled to the very bottom of the 2nd story wood.  Mostly this worked. 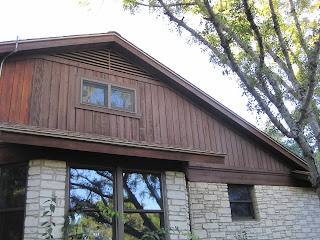 We were unable to work one day when the winds were so high that it kept tearing the plastic off and blowing it into the yard. 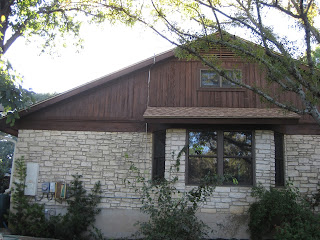 With that done, we then turned our attention to the wood over (and around) the garage doors. 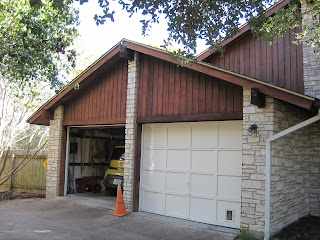 Again, using the ladder to reach these areas, a trim brush around the edges, and plastic sheeting on the cement, to keep drips off the driveway, we were able to get this done. 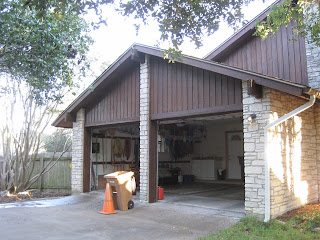 All this took about 2.5 gallons of Behr Premium Exterior Wood Stain, Semi-transparent, in Chocolate (ST-129), so we bought 3 gallons (one at a time as we needed them) from Home Depot ($35.48 a gallon).

Looking around the house more carefully, there was significant weathering on the fascia boards, so we used the remaining half-gallon of stain to cover them.  These were easiest to get to from the roof, rather than a ladder.  We did the fascia boards on the back 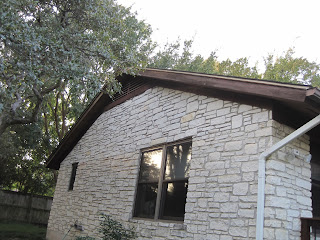 on the West side 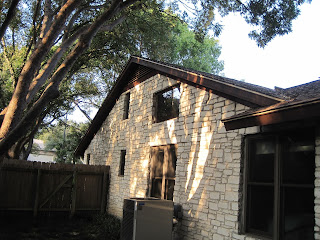 and in the Front. 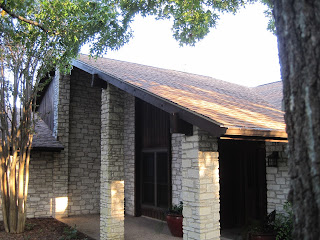 Originally, there was some shoe moulding around the garage doors, which instead of being stained, like the bulk of the wood, was painted to match the doors.  Part of the reason for being painted was that it was interior pine paint-grade trim.  We removed it and replaced it with 1x4 unfinished cedar, which matches the style of the rest of the trim.  (All the windows and doors have 1x4 stained wood trim.)  Doing this reveals that the two garage doors, while mostly the same size, are not exactly the same size.  This may be an issue when we replace the garage doors.