Digging up the back half of the front yard, Part 6

The pile of dirt from digging has filled much of the trench that is "done" and we have more coming, so we used the jack hammer to smooth out the bottom of more of the trench from the dirt pile towards the street. 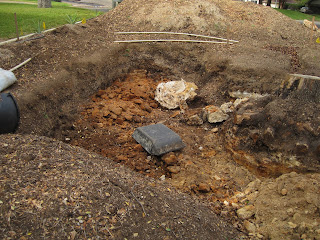 Then we turned our attention to the stump, and used the jack hammer to excavate deeper both on the side closest to the house and sidewalk, 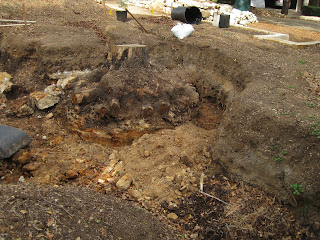 The side of the stump closest to the street had two very large white hard limestone under it, not the crumbly porous limestone that was on the other side (and in the trench that we saw earlier in this post). 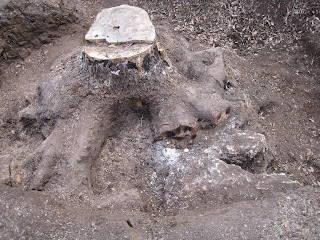 We broke those rocks up, so that we will be able to move them out. 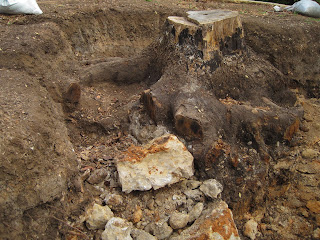 A couple of days of moving the rock that was loosened by the jack hammer and we have a pretty clean bottom up near the head of the trench. 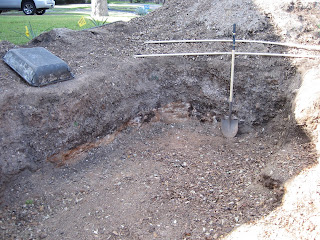 Notice however that around the edges, the lower 6 to 12 inches appear to be rock.  So either we haven't gone far enough to reach the area that we excavated last year, or we have gone down further than we did last year.

An exploratory dig into the corner, and along the side 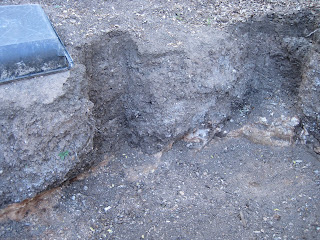 shows that we apparently have gone down further than last year.  It looks to me that last year, with the front section of the yard to excavate, we followed the rough contour of the land -- sloping up slowly towards the street.  But with this year's digging, we have kept it pretty flat.  The net is that there is a step up of about 6 to 9 inches between the back half and front half of the yard.

Posted by crazyjim at 8:59 AM No comments: