We bought a Kenmore Elite Dishwasher in February 2009. Linda was willing to pay extra for a really quite system, and it has done that.

But when we bought it I thought that the contraption that dispenses the dishwasher detergent was badly designed. It has a little lever that is caught behind a small plastic tab. During the proper point in the wash cycle, the lever moves and the door holding the detergent in place flings open. It seemed clear that the small plastic tab is bound to break.

And so it did. So now the problem is how to replace this part of the dishwasher. The first step is to go to the Sears web site. This takes you to the Sears Parts Direct web site, where I can plug in the model number (665.13153K701) and get the list of parts for this model. Since the dispenser is on the door, we look at the "Door and Latch Parts". Part number 8 is the "Dispenser". The part is sent UPS, and 3 days later, a box shows up with the new dispenser. 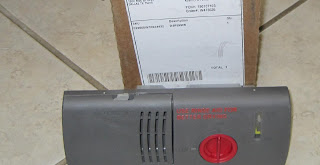 Before we begin, we cut power to the dishwasher. We have an on/off switch on the wall near the sink, but you can also cut it at your circuit breaker box.

To replace the old one, the first problem is to remove the door. This is held on with a set of screws around the inside of the door. 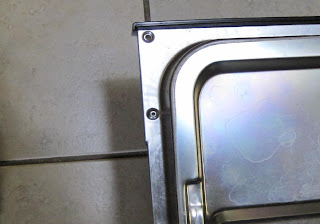 There are two types of screws -- along the top they are about an inch long; along the sides, they are only about a half an inch.

The door then just lifts off. 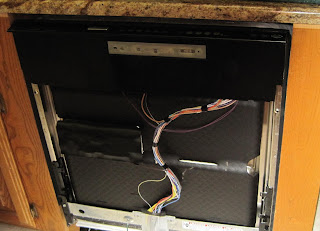 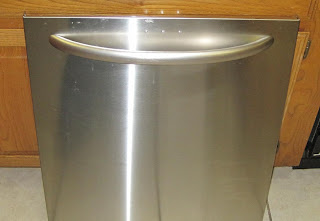 Now you can see the back side of the detergent dispenser. There is a black plastic flap covering it. It's held on by another set of screws. This time they are 3/16 hex head screws, about 6 of them around the perimeter of the dispenser. 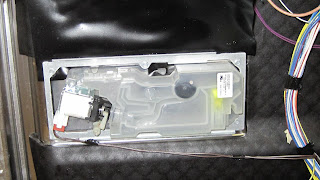 Removing those screws, there are two tabs, one on the top right, one on the bottom left, and the dispenser just pops right out. Be sure to disconnect the wiring. There is a little tab that holds it secure. Pry the tab a little and the wiring plug pops out. 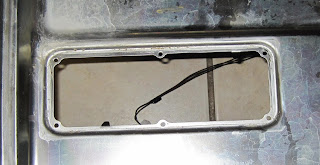 Now we just reverse the process.

Push the new dispenser in from the inside of the door. The two tabs should grab it and hold it in place. Reattach the 6 hex-head screws. These also hold the frame and the black plastic flap at the same time. 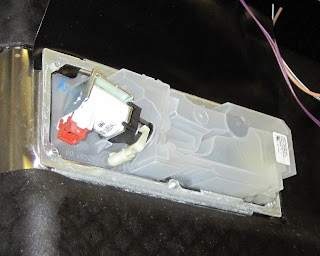 Put the door back in place. Use the Torx T-10 screws to reattach it.

Turn the power back on, and test it out to see that it works.
Posted by crazyjim at 3:44 PM No comments: