The Natural Gas Pipe in the Front Yard

The survey for the house shows a 5 foot easement along the West property line in the front yard. 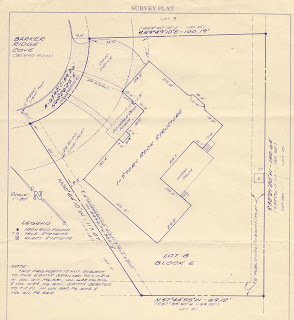 The survey says "5' UNDERGROUND ELECT. & TELE ESMT." but calling 811 to mark the utilities before digging shows there are no electrical or telephone lines in the front (they are in the back), and no water or cable.  But there is a gas line.  (And there is an electrical line in the neighbor's yard for the light pole.)

So we have carefully dug to try to avoid the gas line until we can find it and expose it.  The 811 markings showed more or less where it was.  Eventually, after months of digging, we have located it and exposed it. 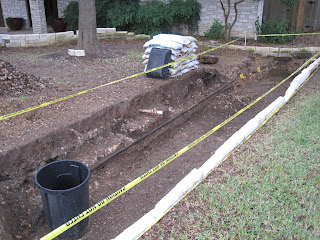 As it gets closer to the street, it suddenly curves down and drops deep into the earth. 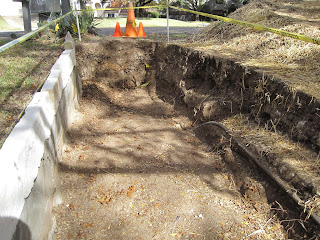 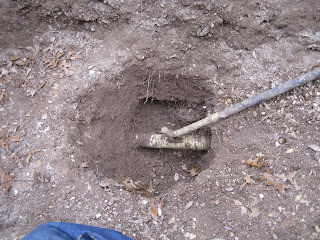 At this point, the pipe is between 58 inches (the top of the little T) to 64 inches (the big pipe) deep.

So part of our objective in this digging, in addition to taking out the rock and making it better dirt for growing lawns and trees, is to see if we can move the gas line back where it is supposed to be, and deeper.  If we could move the gas line to the bottom of the trench next to the dividing cement wall along the property line, it would be within the first foot of the easement, and 32 to 36 inches deep for its entire run in the front yard.  Discussions with the gas company suggest they are willing to do that, but they will need to run a new line (plastic) from the T (I assume) to the house.

Having dug the entire easement from the T to the rock border, we next need to dig out a trench for the new line from the rock border to the gas meter.  Unfortunately, this is right below the new River of Rocks, but having just put that in, we should be able to take it back out, and then put it back again, with two goals -- (1) expose where the current gas line is, and (2) create a trench for where the new gas line should be.  We will need to keep aware of (a) the irrigation lines, and (b) the French drain.  In fact, we want to see about creating a 4 inch PVC conduit for the gas line, to make it less likely that it will be dug up without warning.

Posted by crazyjim at 6:37 PM No comments: