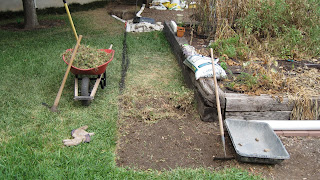 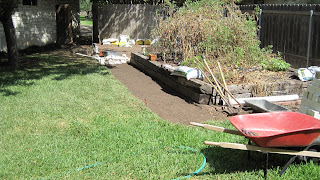 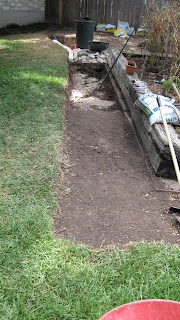 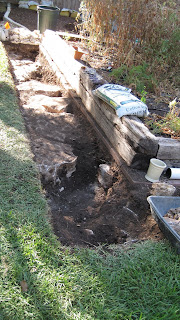 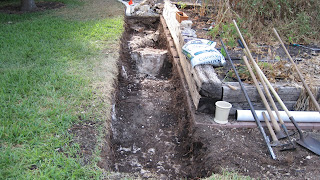 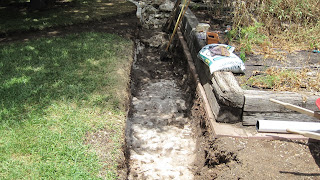 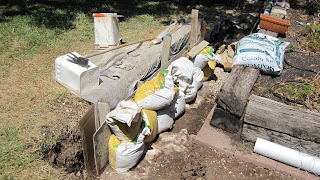 Posted by crazyjim at 5:02 PM No comments:

We've been having problems with our telephone for some time. This is our AT&T land-line telephone, the one that was installed when the house was built in 1986.

For a couple of years now, the amount of static and noise on the line has been increasing. Last year (September 2010), when Hurricane Hermine came thru, we got 14 inches of rain in one day. A couple of days later, the phone line was generating so much static that we couldn't dial out, or hear much when someone called. At that point, a couple of guys came out and said the problem seemed to be below the concrete pedestal in the back yard with the electrical transformer. Then they went away, and gradually, the problems with the phone line went away.

This year, the static and noise increased again (and we've had no rain). Eventually it got bad enough I figured we needed to try again. I put in a trouble report with AT&T. In retaliation, the phone line decided to just die altogether. No signal. No dial tone. So at least it wasn't a subjective or transitory problem.

After 4 days, a repair person came out and agreed that the line was dead. The next day, a locator came out to (a) agree the line was dead, and (b) mark the lawn with where the line went and where the problem appeared to be. They can apparently send a signal down the line and when it gets to the break, it reflects and comes back. From the time it takes to get the reflection, they can compute how far down the wire the problem is. 39 feet. Which put it pretty much at the electrical transformer.

Another 4 days later, a crew of two guys showed up to dig up the lawn, to get at the phone wire at the point where the problem should be. They dug down and found the trench in the limestone where all the utility lines are (phone, cable, electrical). But they could not find the telephone line. 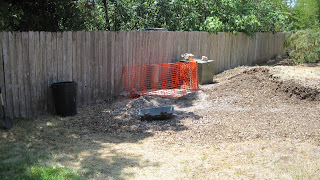 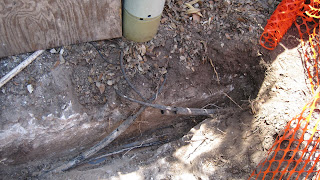 So this digging crew left, needing another locator. F days later, another locator person showed up, and found a spot on the other side of the electrical box. Another dig crew came out and dug down and found where our phone line was split off from the main cable. 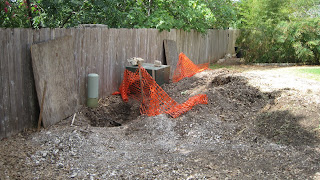 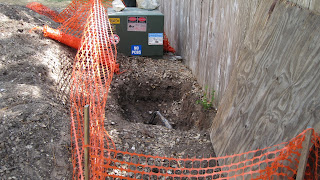 Since it was now some 14 days without a dial tone, the installer put in a new telephone line by opening up the main line and splicing on a new cable, and then ran that cable across the yard to the interface box on the side of the house and attaching it instead of the old line. The old wiring is still there, buried in the yard,
but useless, and detached. The new wiring is just a black cable running across the yard. Another dig crew needs to come out and bury the line. 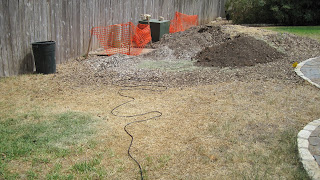 Turns out two dig crews came out. On Wednesday, a crew of two guys came out and filled in the holes and removed the plywood and orange plastic fence.

This left the telephone cable coming up out of the ground on the right side of the electrical box, and then going back down on the left before coming back up and crawling across the lawn to the house. And they said that another dig crew would come out and just "shove the line under the grass", which is what the cable people did when they needed to replace the cable. 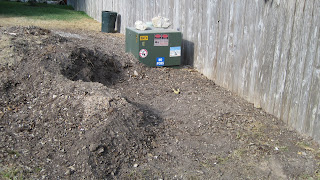 This seemed short-sighted, so I went out and dug up both sides, to find the cable, and then along the front of the electrical box, down to bed rock (which isn't very far right there), and threaded the telephone cable from the one side (where it attaches to the main telephone trunk), over to the other side, where it will continue to the house. There was lots of extra cable, so I coiled the extra on both the left and the right sides. 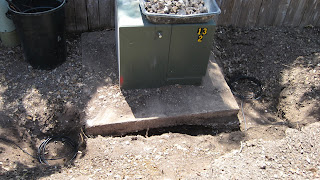 Then I buried all this, so that the right side of the box is completely finished, and the cable just comes up out of the ground on the left side, and then runs across the yard to the house. 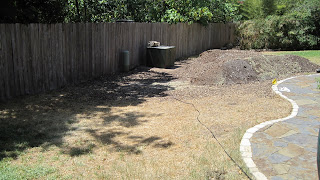 Literally 5 minutes after I finished this work, the final dig crew showed up and 3 guys pushed the cable under the grass in about 10 minutes. 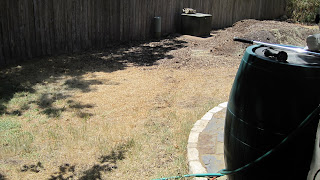 That should hold everything until this entire area of the yard is excavated.
Posted by crazyjim at 9:15 AM No comments: