We have 3 of the four sides of the raised garden prepared for the walkway, plus the section from the gate to the raised garden. These areas have walls defining the walkway edges, with limestone blocks to give it a finished look. Eventually, we want to put flagstones over them, but that will wait until the entire walkway is finished. We will put the flagstones on a base of decomposed granite over the rubble rock that fills most of the walkway. It seems like a good time to go ahead with the decomposed granite. It will make working in this area much easier.

We bought 3 cubic yards of decomposed granite from Whittlesey Landscape Supplies. To see how large this is, each of the bags below is one yard by one yard by one yard -- a cubic yard. Plus we got a palette of the white limestone 4x4 blocks that we use as edging for our work. We will need them along the walkway, plus all around the yard along the fence. 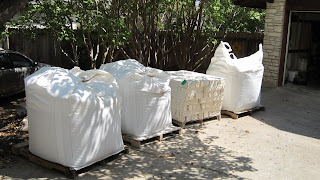 The rest of this work was fairly simple -- shovel the decomposed granite out of the big white plastic bags, into the wheelbarrow, and then out onto the walkway sections that have been filled with rock rubble. 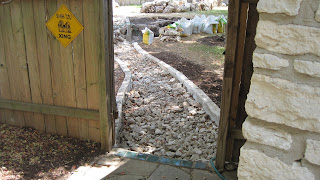 Hours later, we have the walkways filled in. We have about a half cubic yard more than we needed; it's stored behind the raised garden and we can use it on the section in front of the raised garden, as soon as we have that well-defined and filled in with rock rubble. 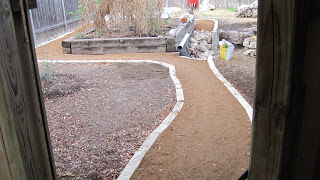 And we expect that this will settle, especially if/when we get some rain.
Posted by crazyjim at 5:32 PM No comments:

The Walkway across the yard, part 1

We have decided to dig out the first layer of rock for the walkway that goes from the raised garden to the back patio. When David was here, we started this work, but didn't really have time to do much. Our approach is to define the inner curve of the walkway, and dig out from the other side, leaving one side to use for framing the wall that defines the walkway. 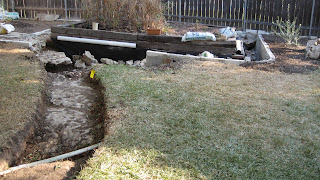 So here, we can see the initial digging, going from the edge of the walkway, digging South. We encounter rock (and the sprinkler line) just below the surface, so we have only a couple of inches of dirt to remove. 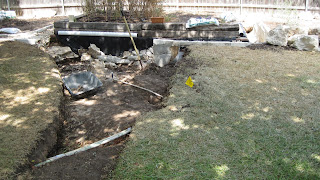 As we expose the rock, we need to break it up and get it out of the way. The easiest way to do this is to use the dirt as a ramp, allowing us to roll the rocks up and out of the growing pit. 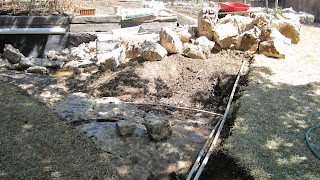 Days of this sort of work, gets us a roughly triangular pit two to three feet deep with a well-defined edge for a wall to define one edge of the walkway. 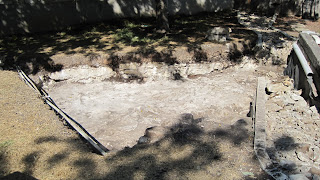 We are now in position to be able to frame and pour the concrete for this wall.

First we form and pour the wall along the remaining dirt. 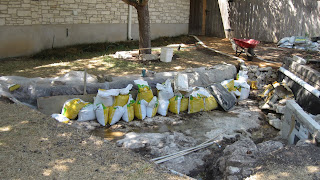 Then we frame and pour the other wall. This is more difficult, since we have to simultaneously support both sides of this wall. 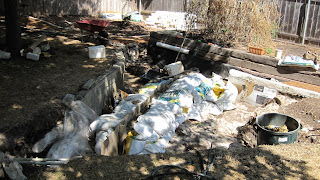 We have to make sure that both walls are about the same height and will form a level walkway from the gate to the back patio walk. 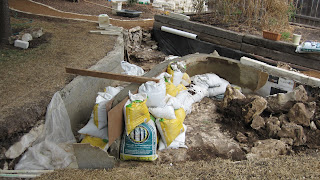 Once that sets for a couple days, we can put the limestone blocks on the top and the walls are done. 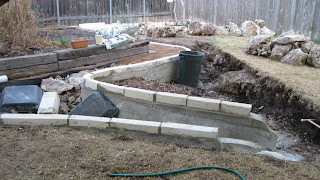 Now we need to dig out the yard, and fill the area between the two walls with rock rubble to create the stable, filled area for the decomposed granite and finally the flagstones.
Posted by crazyjim at 5:14 PM No comments: 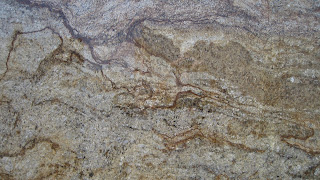 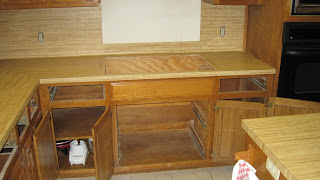 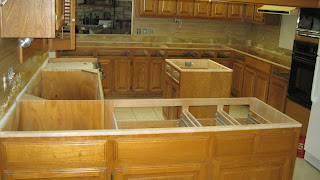 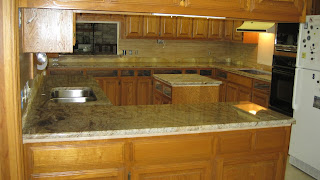 Walkway for the South Pit

To complete the walkway, we need to put it on the South side of the raised garden. We have it already excavated, walled, and filled with rock on the back side (East), North, and West.

As we excavate the yard, it would be useful to have the South side ready to accep the rocks we dig out.

Also, the South Pit has been excavated and filled back in, so all we have to do is shovel out the dirt and put in the wall. A couple of days of digging gets us almost there. 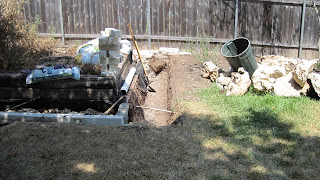 We need to trim up the dirt next to the South Pit, so that we get a clean vertical wall under the string, which would be 36 inches from the raised garden. Then we can frame it and pour the retaining wall. The retaining wall took 23 bags of Quikrete. 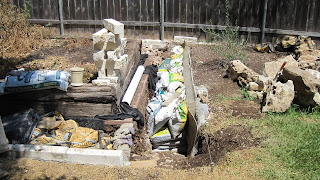 To finish this section of the walkway, we poured the corner that connects the South wall to the West wall. 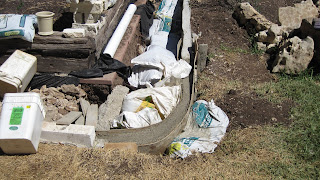 Using mortar mix to attach the 4x4 chopped/sawed limestone blocks to the top, we have a finished wall separating where the walkway will be from the South bed. 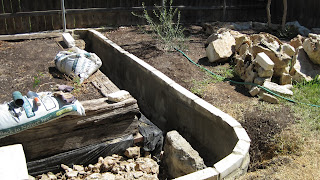 Now all we need to do is fill the walkway area with rubble rock and top it with decomposed granite and flagstones.
Posted by crazyjim at 8:09 AM No comments: