We want to install a retaining wall, to level the dirt level in the West Lawn both for the big live oak tree and for the River of Rocks as it comes around the corner of the house and heads to the back deck.  The area between the retaining wall and the Jungle will be a lower level as a bed or grassy area, which, since it is at the bottom of the West Lawn, we will call the Bottom Zone.  I have tentatively outlined where I think the retaining wall will go. 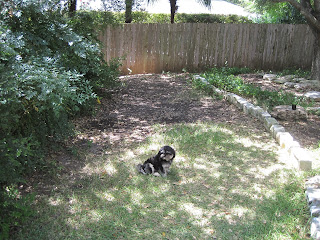 We will want to excavate this entire area, so that there is plenty of good dirt for the roots of whatever we end up planting there (grass like the East Lawn, for example).  So we begin by digging up all the dirt, down to bed-rock. 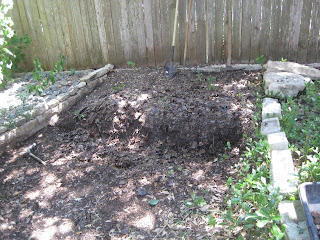 This will take days or weeks.

Two days later, we have a start.  We have stripped the dirt off the top of the section near the fence.  We can not go too far down in a section, because of the French Drain that runs along the fence and ends in the Blue Rock Pool.

But once we are past that point, we can dig all the way down to rock. 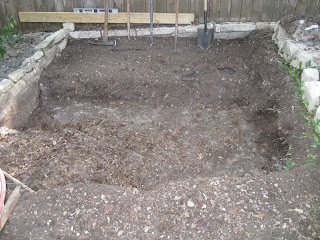 I had almost forgotten how this is done.  First I dig a hole or trench to get down to the depth that I want to be at.  Then I can dig sideways by standing in the trench and extending it to the adjoining area.  For example, we start from this position, and expose a bit of the rock buried under the lawn. 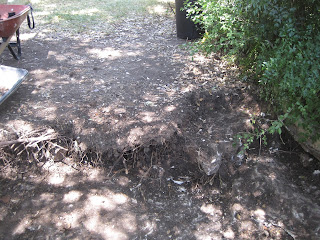 We continue to remove the dirt from the rock, exposing more and more rock at the save level. 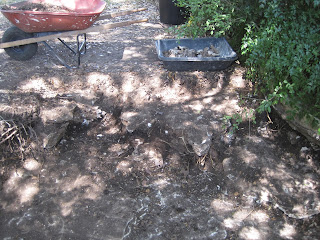 The dirt is mixed with leaves and grass and put in the wheelbarrow and taken away to be saved.  When the rock is all removed, the dirt is brought back. 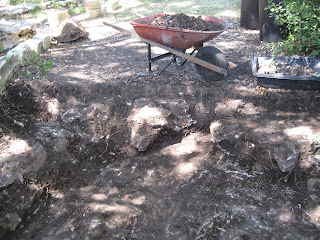 As we did out the rock, there are smaller rocks.  These we put aside in a bucket until we have enough to wheelbarrow all of these smaller rocks around to the front for disposal.  We are trying to improve the soil quality by removing the rocks and adding organic material (leaves, grass, compost), as well as replacing the volume of the rock with better quality dirt. 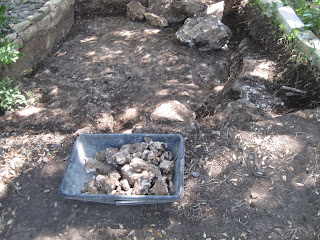 With enough digging, we can expose an entire rock.  Most of our rock is broken down into pieces smaller than the kitchen table, although occasionally we will get even larger pieces.  If the rock is too large to be rolled around, I will need to break it into smaller (large) rocks. 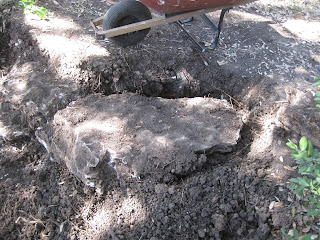 The result is a pile of large rocks (too large to lift, but small enough to be rolled around). 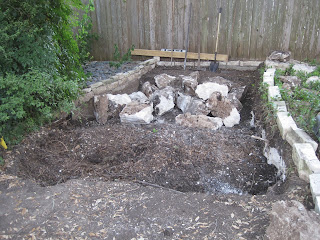 and a pile of dirt which is put off to the side for later. We can get a big pile of dirt from these holes (fluffed up by leaves and grass and air). 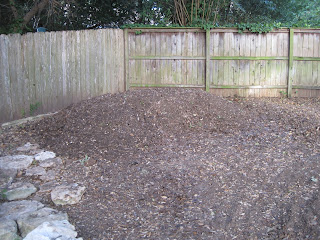 Posted by crazyjim at 1:38 PM No comments: