Finishing the wall for The Jungle

We have a plant bed in the back yard which we call The Jungle.  It was originally developed back in the 1980s to keep some trees and to add some plants around it.  There were two types of plants: something and Nandina.  Over the years (decades), the Nandina has taken over, so it's just the trees and the Nandina, pretty much.

Nandina is a cousin of bamboo, and like bamboo, it likes to spread via its roots.  There is a short stone edging around The Jungle, but the Nandina spreads into the yard by going under the edging.  So as long as I'm digging up the yard anyway, I'm also putting a wall under the edging that goes down to bedrock, to keep the Nandina from getting out of The Jungle.

Previously I did the section by the Bamboo Grove, and by the Bottoms, so there is just one section left. 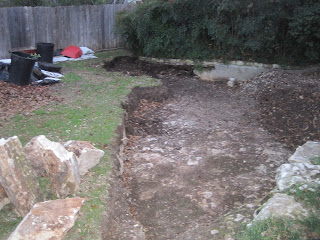 We dug out the yard around this edge of the Jungle, and kept digging until we hit the dirt that had already been excavated behind the Jungle. 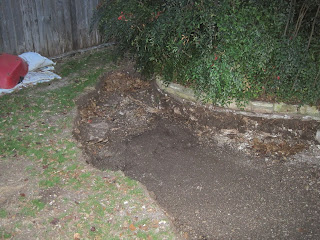 Then we had to clean up the area under the edging -- cleaning out the dirt, the rocks, and the roots.

Then we framed it up to pour a concrete wall under the edging. 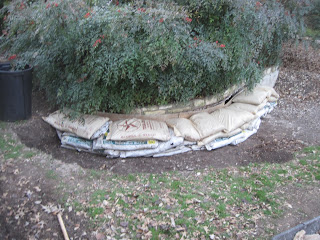 We only got half of the area filled the first day 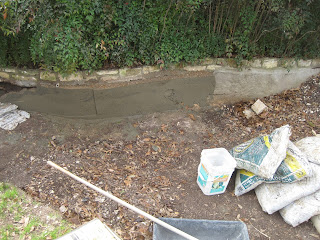 so we framed up the second half and did that the next day. 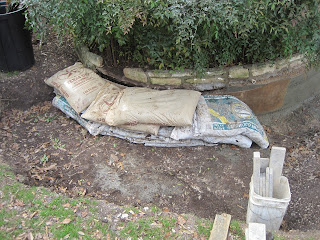 That finished off the concrete.  It took 16 of the 60-pound Quikrete bags of concrete to build the wall, plus an 80-pound bag of Mason Mix to finish it off. 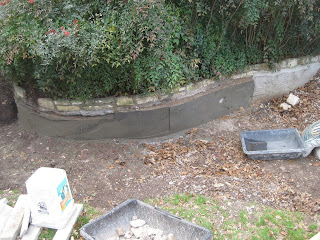 We used Mason's Mix to smooth off the wall surface and especially the interface between the stone edging and the wall itself.  Also to mortar in a rock in the missing part of the edging at the far left of the photo. 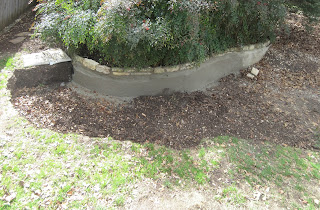 Posted by crazyjim at 2:55 PM No comments: