Test of Palisades Zoysia for the Backyard

Someday all the digging in the backyard will be done and we will want to put grass back in.  I checked with the City and they recommend

Since the hope is to make the back yard more shady, it seems like the Palisades Zoysia is the recommended type.  A brochure I found about it said

"Palisades is a medium textured, dark green Turfgrass best suited for residential lawns and commercial sites when a non-traditional lawn is desired.  Developed by Texas A&M, Palisades Zoysia grass scores high in shade, cold, and drought tolerance making it the perfect lawn for all areas of Texas."

In our case, the shade and drought tolerance will be useful.

But will it work in our yard?  To test it, I went and bought two pieces of it and put it down in the backyard, over near the fence where the digging should be done. 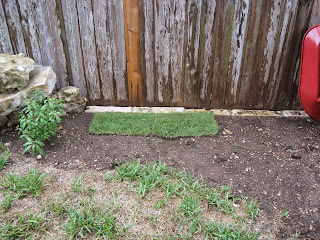 Zoysia comes as sod which is cut into pieces.  Each piece is about 16 inches by 24 inches, so putting them down like this gives me an area 16 inches by 48 inches.  (Actually they seem to have cut them short, so it's about 16 inches by 46 inches).  After putting the pieces down, I walked on them to press them down to the dirt, and then watered them well.  This weekend is supposed to be wet, so they should be well watered for the next two or three days.

I bought the two pieces from King Ranch Turfgrass, for $5.41.

The plant on the left is from the raised garden and should go back once that is rebuilt.

Posted by crazyjim at 1:47 PM No comments:

We had a roof put on in 2004, but in 2008 there was a major hail storm.  Our insurance company totalled the roof. They estimated a complete re-roof would cost about $24K.  After our deductible of $10K, they wrote us a check for $14K.  The roof did not seem to me to be in bad shape, so I waited.

Now, in 2013, I'm beginning to see spots where the roof is wearing out. 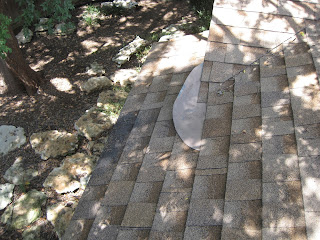 (Although this spot could be because of trees brushing against the roof).  And one of the skylights looks like it is coming apart. 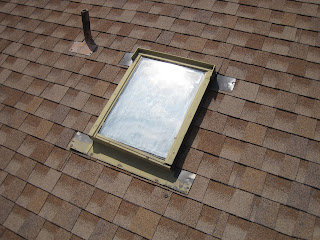 So I checked Angie's List for roofers and choose three: Clear Choice Roofing, Masada Roofing, and Dayton Roofing and Renovation.  Each of them sent out someone to look the roof over, measure it, and discuss what needed to be done.  I figured that I needed (1) the roof replaced, (2) at least the one skylight replaced, and (3) the solar panels removed and replaced after the roof.

We went with  Dayton Roofing and Renovation because they did the best with the skylights -- they bid to remove, rebuild and install 3 new (Velux) skylights, as well as including the cost of removing and reinstalling the solar panels.

It took about a month to contact the roofers, get the estimates, pick one of them, and get things scheduled.  Dayton subcontracted the solar work to Curtis Christian "The Solar Man" (512-442-8081). They came out today (Friday, 6 Sept 2013), and removed the solar panels.  They got here about 7:30 AM and were done by 9:30 AM.  They removed the panels, and put them on the back porch. 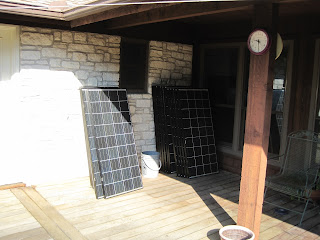 And removed the rails that the panels are mounted on.  The rails are bolted to the roof, thru the roofing, and into the roof rafters.  Originally this used lag bolts, but these were removed and replaced with large hanger bolts.  A hanger bolt has a screw on one end (which goes down into the roof rafter), and a bolt (for use with a nut) on the other end.  So these can be left in place and roofed over, leaving the bolt sticking up for the solar rails to be put on.
To make it easy for the roofers to see and avoid them, I painted the hanger bolts florescent yellow. 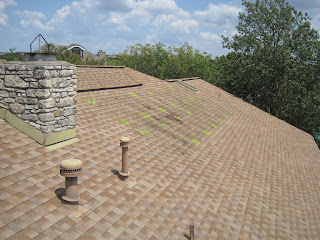 The re-roofing took 3 days -- Monday thru Wednesday.  First they took the existing roof off. 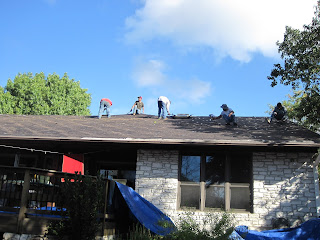 Then they distributed the new shingles. 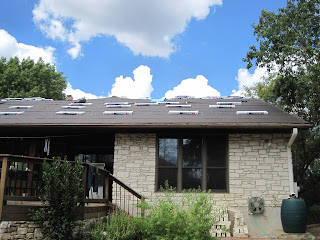 and put them on. 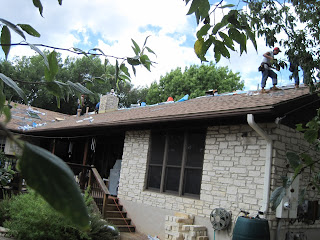 They also rebuilt and replaced all the skylights. 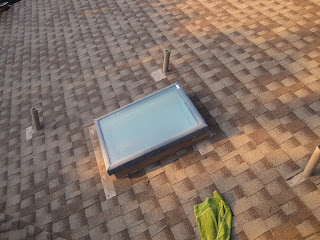 And when it was over, the solar man came back and re-installed the solar panels. 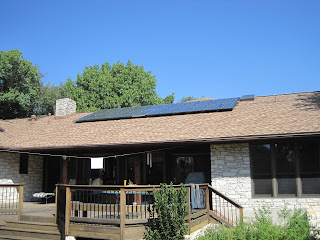 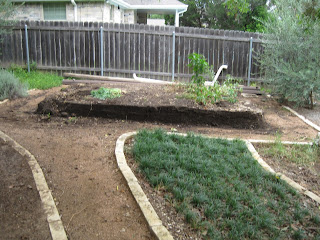 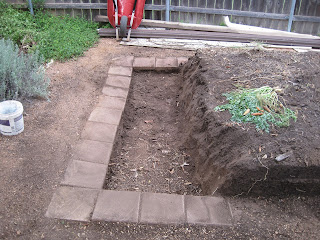 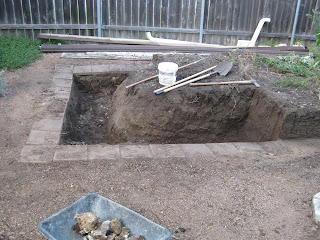 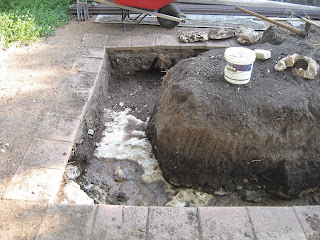 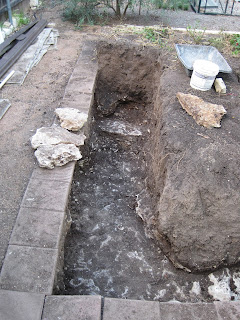 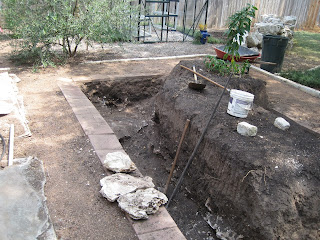 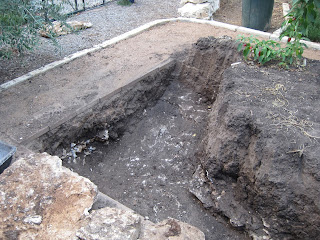 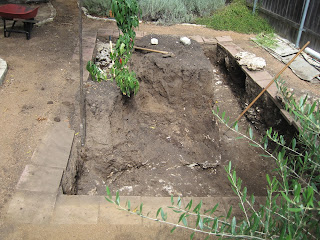 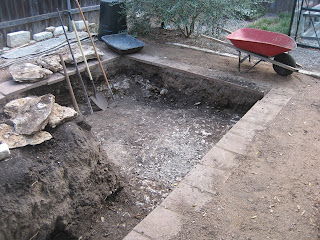 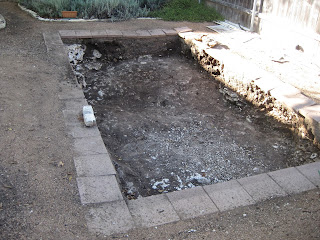