Moving the Gas Line in the Front Yard

I think I pretty much finished the digging for the new gas line.  The wall is built, at least most of it, and the path cleared.  So time for the Gas Company (Texas Gas Service) to come actually move the line. 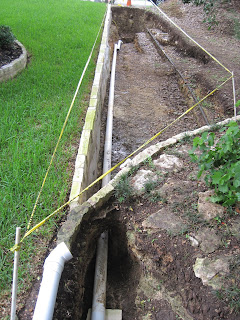 I had talked to an inspector back in September, before starting this, and he had said to call customer service.  From the phone tree, it seems I want a "yard line", although the phone tree only talks about a "new" yard line.  The first call, they said I couldn't do that, without inspections and permits, and they would have the permit department and inspection department call me.  After a couple of days, hearing nothing, I called again, and this time the guy said I need to fill out a "YARD LINE AGREEMENT", which he e-mailed to me, I filled out and e-mailed it back to him.  He said it would take 2 to 3 weeks for the crew to show up.

After 4 weeks, I called to check if there was a schedule.  I called repeatedly over the next weeks.  Each time, I was told that job had been let to a subcontractor, and they could not get ahold of them right then, but they would, and would call me back.  No one ever did.

Finally after about 6 weeks, we see a couple of pickups with a trailer and a back-hoe on it in the cove when we get up.  But by the time I can put on my shoes to go out, they are gone.  Follow-up calls seem to suggest that they came, they looked, and they left because they were expecting to did everything up themselves (hence the back-hoe), and were not prepared to see it already dug up.

Weeks more of calling, and I finally get told to talk to a specific inspector -- the same guy I talked to last Sept.  But it turns out his phone had died, but I got his supervisor's phone number and was able to get that they would be out on Friday.  When Friday came and went, another call gave that they would be out on Saturday.  Then Monday.  Finally, they came out today, Tuesday.

They got there around 8AM, and I went out to talk to them, explaining how I thought we could run the new line thru a 4 inch PVC conduit to make it safer (I would know when I got to the gas line in any further digging), and maybe easier for them to replace in the future.  They were okay with that -- they called the conduit a "sleeve" -- and started work.

I had pieced together most of the PVC, but not the three corners, where it changed direction, just in case there were issues with running the new gas line.

The crew disconnected the old gas line, and started removing it.  Then they started piecing together the PVC pipe and running the new gas line thru it.  The new gas line is a yellow plastic line.  They attached a metal fitting at the end near the house. 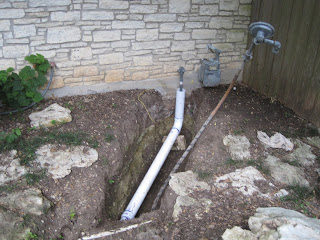 Two more guys showed up who were the welders.  They got down in the newly enlarged hole and created a new connection in the main line. 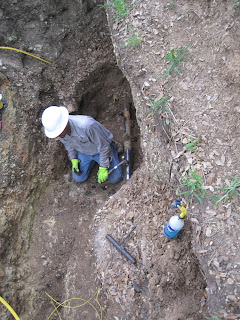 They attached the newly run plastic line to the new welded connection.  The plastic lines at both ends were cut and welded to connectors by using a special tool to get the cuts just right and then a special heater that got them up to 450 degrees to melt the plastic ends and put them together. 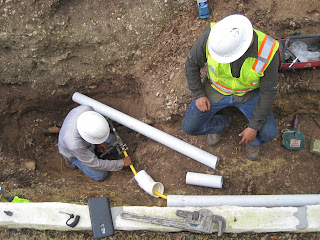 During all this two inspectors showed up and kept an eye on everything.

While digging, I sometimes found a yellow plastic tape "Gas Line Below" as I dug.  Once the PVC was all in place, one guy took some of that tape and wrapped it around the PVC, barber-pole style. 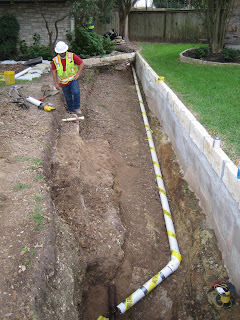 They pressurized the line and let it sit for at least 15 minutes, spraying soapy water on all the joints, to see if anything leaked (it didn't).

Around this time, another guy showed up to hook up the meter -- the first crew just laid the line, and connected everything up to the house.  Then another guy came and installed the meter.  They brought a new meter and hooked it up, pressure tested it, and then hooked it into the house. 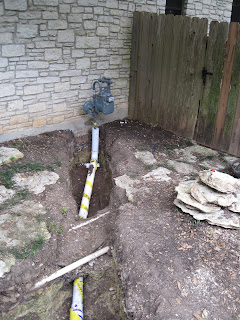 At that point me and the meter guy walked around the house and checked on the stove top, and the two hot water heaters.  The stove worked right away -- apparently they didn't even get air in the line in all the work.  The two hot water heaters needed to have their pilot lights restarted, but then they worked too.

During all this, another guy showed up with a trailer load of sand.  After everything was finished -- the line in place, the old line removed, the new meter installed, and gas flowing -- they poured the sand over the street end of the new line.  They said to be sure to keep 6 inches from the line in all directions protected by the sand. 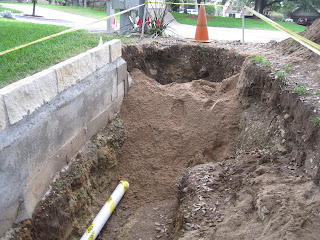 They even poured some sand into the PVC at the house end, to support the pipe line and keep it in the middle of the PVC. 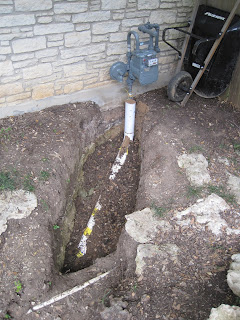 They put some dirt (from the pile) around the PVC in the trench, to hold it in place, and at the right height.

And with that they were done.  New meter, new gas pipeline, new connection into the gas main, and everything working.  They were done by 11:30.