I don't have either enough time or enough concrete right now to finish the walkway, but I could at least get started.

I framed the shorter of the two walls to define the walkway. 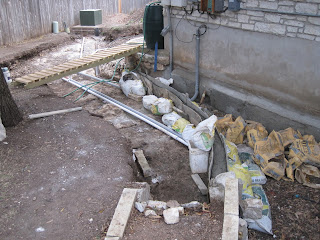 And then filled it with concrete. 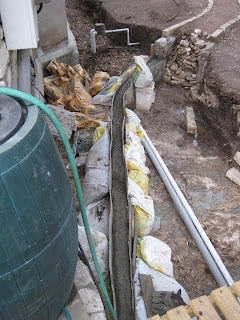 Posted by crazyjim at 4:11 PM No comments:

Getting the cable and telephone lines into the conduit was a farce.

I called both AT&T (telephone) and Time-Warner (cable) on Monday to see if they wanted to do this work.  Both said they would schedule someone to come out and put their cable in the new conduit.

But Time-Warner didn't give a day when they would be out, and so on Wednesday, I decided to do it myself.  I disconnected the cable from the cable box out near the fence and put it in the conduit at the house, eventually getting it out of the conduit back near the fence.  I hooked it back up at the cable box, and tested that everything still worked.  As I was cleaning things up, guess who shows up? A cable guy.

He goes over the work, and decides that it would be better to just run a new cable, replacing the old cable.  That way it can be exactly the right length.  Also he inspected the big cables in the ground that I uncovered and figured they should be repaired and maintained.  So he put a service call in for another person to come out and fix them.  On Thursday, they came out and re-did those connections. 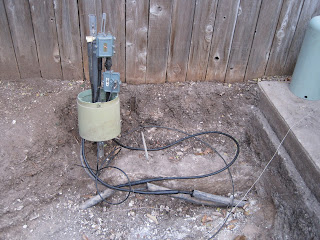 On Thursday, they tried to get a hold of me, but I was pouring concrete and didn't hear the phone.  I wasn't expecting anyone to call on Thursday, since they had said they would be out on Friday.  The guy on Thursday said that they were given the address "Harbor Ridge Cove" instead of "Barker Ridge Cove", and since they couldn't find that, had tossed the work order into a "junk" bin.

On Friday, I call them, again, and they said the address was correct, but they couldn't decide what area of town it was, and no one would be out -- they would have to reschedule for a later time.  I thought this was ridiculous, so I told them they were incompetent, and I would just do the work myself.

I started with the Network Interface box just hanging there. 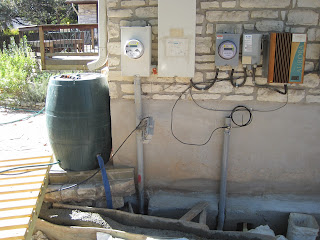 First we record which wires are attached where, and then disconnect the wires and attach the box to the wall. 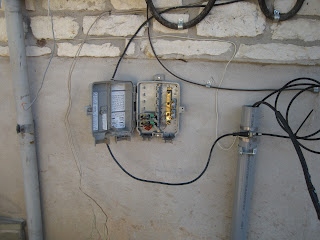 We ran the telephone line thru the conduit and reattach the wires to the AT&T side -- two of the pairs of wires -- the blue and white/blue, and the orange and white/orange.  Also replace the ground wire. 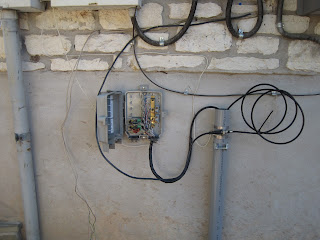 Then re-attach the house telephone wires. 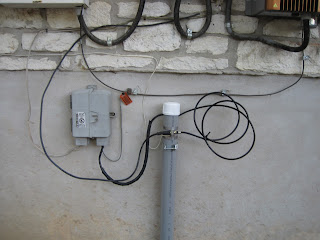 And, again, as I was finishing this off and cleaning up, an AT&T repair guy shows up!  He looks things over, says it is done pretty well, and then proceeds to take it apart and do it again.  The main change was moving the ground wire.  After all that work trying to get someone out, and being told it wasn't going to happen, someone shows up anyway.

After he was done, I put a cap on the conduit, both ends. 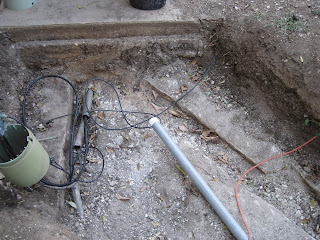 Posted by crazyjim at 3:58 PM No comments: