The fan for the Heating and A/C system died and had to be replaced ($1032).  That should keep the system going for awhile, but it is about 12 years old, so we should be prepared to replace it.

The Lennox system we have has had a number of problems, so I'm inclined to switch brands.  Consumer Reports suggests that Trane is a reliable brand.  I contacted 3 local Trane dealers and got estimates for replacing our current system with a new one.

We could get just standard smoke/CO detectors for around $60, but the top of the line would probably be the Nest units at $100.  We have one Nest that we got with hotel frequent flyer points, and it seems to be working well, so we will go ahead and get two more.  This will replace the previous units, installed in July 2012, replacing the ones put in when the house was built (1986).

The two units near the bedrooms are wired, so we bought two Nest Protects for wired installation.  Circuit 25 for one and Circuit 35 for the other.  Turn the circuit off, take out the old detector, wire in the new connector, install the base for the new units, plug them in, and switch the circuit back on.

One outside the master bedroom. 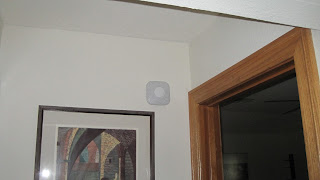 And one in the hallway outside the computer room and other bedrooms. 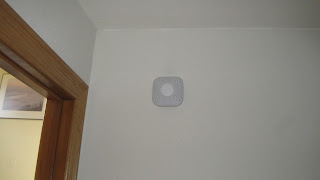 The Nest units themselves are a bit more complex to make work since they connect with WiFi and an app that runs on an iPad or iPhone.  Since our WiFi is limited to devices whose MAC address is on our MAC address list, but it seems we have them working.  They show up as working correctly on the Nest.com web site when I log-in.

Posted by crazyjim at 2:02 PM No comments: