In 1994, we refinanced the mortgage to a 7/23 ARM with an initial interest rate of 5.99%.  The interest rate is to adjust in May 2001, and probably significantly higher than we can get elsewhere.  Plus Linda has moved in and bought half the house, so it makes sense to refinance again, to get a lower rate than we expect. (Note: turns out the adjusted rate would have been 8.75%).  And it turns out that I had started a new job and my employer has an arrangement with Chase Bank to provide low-cost mortgages (as a way to attract new employees). 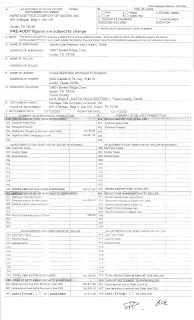 The appraisal compared our house with 3 close-by that had been sold recently, trying to adjust for the differences in age, size, and so on. 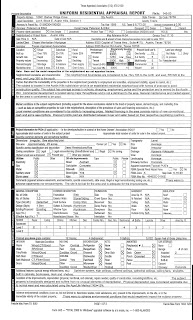 Again the appraisal tried to figure out exactly the size of the house. 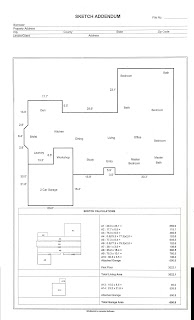 Interestingly, the previous appraisal  thought the house was 3048 square feet; this one things it is 3022 square feet.  The garage was 592 but is now 591.

The photos of the house show how the landscaping has changed, in the front

and in the back

Posted by crazyjim at 2:33 PM No comments:

We replaced the original tile around the guest bathtub with new tile. The selected tile was an 8 inch by 8 inch square of blue.

A series of minor improvements

Install an electrical outlet in the office for a wall clock. I have a large, old clock from the International Time Recorder company, from 1928. The original clock mechanism needed DC current, so a shop converted it to AC. To hang it on the wall, I need an electrical outlet to plug it in.

Plant a couple more trees. One of the two Chinese Pistache trees by the kitchen died. Replace it with a Mexican White Oak. At least that is what it was sold as. I tend to think it is something else, a Burr oak possibly. But trying to identify it on the internet suggests it is a chestnut tree.

The other tree is another Drake Elm. We have two Drake Elms on the West side of the house and they have done quite well. Plant another further south, in a line with, and spaced like the existing two. It's much smaller now, of course, but in 20 years, maybe it will catch up.

More Dirt. 6 yards of growers mix to spread on the lawn to improve drainage. $202.43 from Austin Landscape Supplies.

Linda is moving in. She has a small dog, Coco. Previously, we had a fence around the house, but only on the property line, so it closed the yard off from the neighbors, but didn't close it off completely. Now we need to be able to keep the dog in the back, so we need to add the extension of the fence from the property line to the house on both the left and right sides. Just Fences did this for $630. Two sections: 23 feet on one side and 14 feet on the other. Each with a gate.

The tiles in the center bathroom are coming lose, and the sheet vinyl in the kitchen is showing its age. Replace both of these with tile from Texas Floors. The kitchen gets a large light colored tile, while the bathroom gets a blue grey tile. $3243.00

Install a big sink in the garage. We had a small after thought of a sink in the garage, but it was barely large enough to wash your hands. We need a place to wash Linda's dog. Someplace we can stand up and still use the sink. I stripped everything out of the corner, and remove the old sink. Then a cabinet from Home Depot -- just a pre-fab white formica on press-board unit. $182. A pre-formed formica counter top of just the right size. A really large plastic sink with a combination spray unit for a faucet. 177.00. The plumbing is more complex than I am used to, so get Austin Plumbing Repair to put it all together. $273.16.