Digging out the Stump, Part 2

The stump is sitting on a pedestal of rock.  Flaky rock, and sometimes soft rock, but rock.  To get it separated from the rock, we need to either pull out the stump or dig out the rock.

In any case, it should be easier to do if the pedestal was smaller in diameter.  So using the jackhammer, and a pick, and a 12-inch chisel and hammer, I went around the stump, trying to dig out as much of the rock between the floor of the ditch and the bottom of the stump. 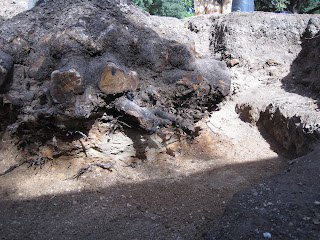 It may be difficult to see much of a difference, but notice the overhang of the root on the right hand side of the stump.

This small undercut is enough to get a jack (a pneumatic bottle jack) under that particular root and jack up the stump.  At first it is just an inch or two.  But that separated the stump from the floor of the ditch and broke loose a lot of the rock in between the two.  I could clean out the broken rock, making the undercut even larger.  Then I could move to a different side of the stump and do the same.  This substantially reduced the size of the rock pedestal holding the stump up.

Once the stump was raised up, on at least one side.  I could put large rocks under it, preventing it from lowering when the jack was removed.  Putting the jack on a similar rock, I could then jack the stump up even higher. 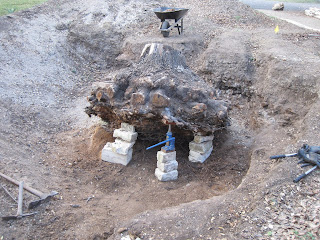 The higher higher the stump was raised, the more rock I could remove from under it.  I could also clean the rock off the bottom of the stump, making it lighter.

In addition to separating the stump from its supporting stone, by focusing the bottle jack on just the one side (the back), we could raise that side more and more, tilting the stump over. 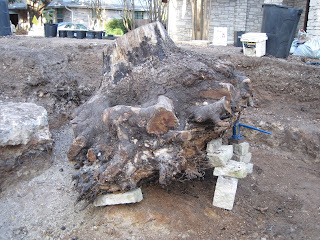 Now, with the stump significantly tilted, we could throw a car tow strap around the stump, mostly on the "top" side. 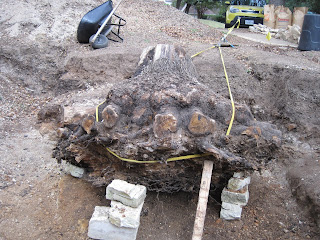 The car tow strap was attached to a hand winch. 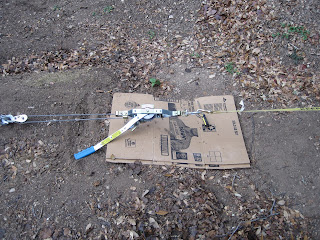 and then anchored on my car (which has a special bolt for towing).  The car was just used as a counter-weight.

By cranking on the winch, the "top" side of the stump was raised up even more 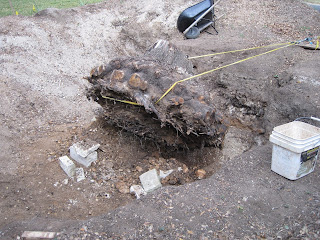 until eventually it was standing on its edge. 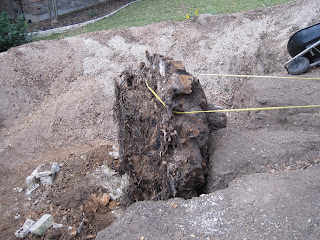 Then we needed to dig out some of the dirt that was holding it back, and eventually, we got it to tip over and out of the hole, so that it came to a rest out of the ditch, sitting on the dirt of the front lawn. 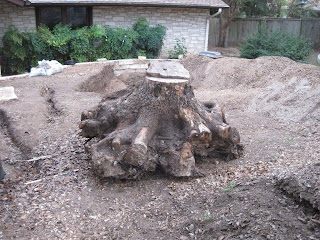 leaving a large hole where the stump had been, suitable for more digging, removing rocks, and general clean-up. 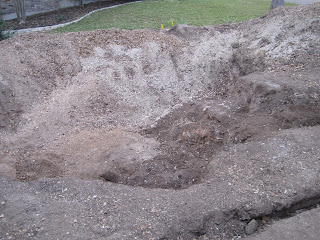 While this was presented as a fairly straightforward operation, it was, in fact, full of reversals (where the stump fell back down into the ditch) and adjustments to the straps, to the winch, use of the jack, digging out dirt and rock, and it was often not clear if it would work at all.  But it did.  The result was a stump out of the ground, and a big hole where it used to be. 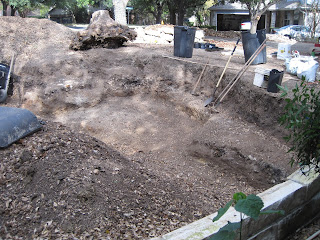 Posted by crazyjim at 2:16 PM No comments: