The walkway across the side yard will run from the gate to the raised garden and back to the deck behind the deck. This defines a new bed area between the house (outside the kitchen) and the walkway. This will be Zone 2 on the irrigation system, so we'll just call it Zone 2.

We want to continue and finish the walkway. But we need to be able to get the irrigation water lines from one side to the other. We put in a 4 inch PVC pipe between the two walkway walls, to allow the irrigation pipes to be run thru it. This allows the Zone 3 irrigation control valve to provide water to the North Bed and South Bed, which will be Zone 3 of the irrigation system.

But an examination of the current zone 3 supply line shows that it (a) is not deep enough -- we want it to be well down, out of the way -- and (b) sitting on top of a large rock, so it can't be moved down 5 or 6 inches to go thru the 4 inch PVC pipe. 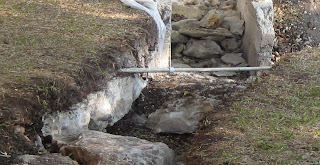 So to get the irrigation lines in the PVC pipe, we need to take out the rock that is preventing them from being moved down to the level of the PVC pipe.

After some digging we find that this rock is quite large. 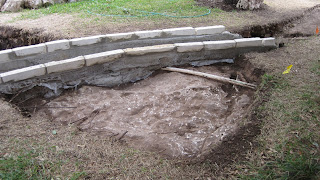 Using the jackhammer, we can begin to break it up into smaller pieces so that we can get them up out of the ground. 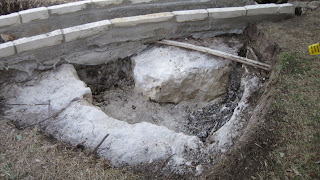 Several more days of work gets us a large set of rocks removed from an increasingly large hole in the ground. 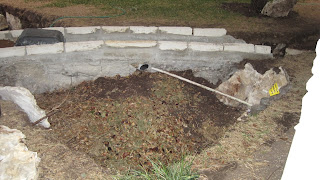 We will need to get rid of these rocks to continue digging. 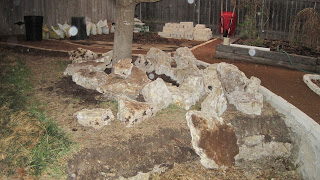 Posted by crazyjim at 3:13 PM No comments: