Final Dirt for the Front Yard

With the sprinkler system and heads installed, we could order the final layer of dirt for the front yard.  Working from the estimated size of the front yard (1370 square feet) and the depth that we were missing to the top of the stone retaining wall (from 2 to 6 inches -- assume 4 on average), we computed we needed 17 cubic yards of dirt.

Plus we would like to cover the spot in the back yard where the Monterrey Oak had just been removed -- a semi-circle with a radius of 11 feet about 2 inches deep.

So we ordered 18 cubic yards of dirt from Whittlesey Landscape Supplies.  The price of dirt has significantly increased -- $47.85 per yard for the Professional Mix we use, plus delivery of $130 now, for a total of $1073.08.  But they were able to dump it right into the front yard, which put it where it needed to be. 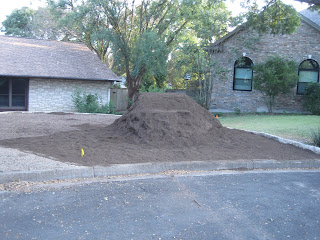 This was followed by several days of spreading the dirt around, trying to level the front yard. 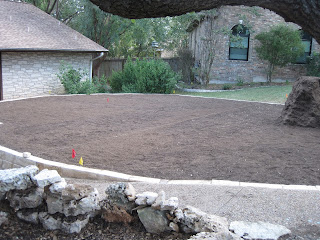 But the front yard is now ready for planting. 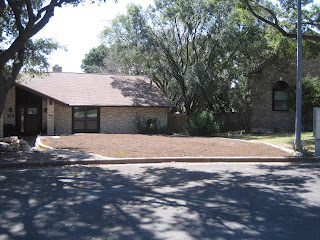 There is one problem -- the dirt was dumped right smack on top of one of the sprinkler heads.   But after spreading the dirt out, the head could be easily located by turning on Zone 10, and the missing head pops right up!

And we had a bit of dirt left over for the spot where the Monterey Oak had been. 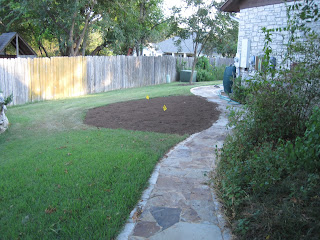 and to try to smooth out the slope of the lawn where it had been too steep. 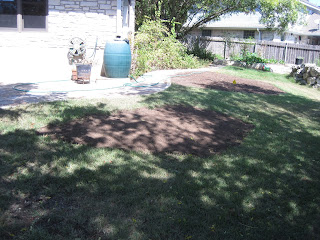 Posted by crazyjim at 1:48 PM No comments: