End of work for awhile

We have been having a minor water leakage problem in the back yard. The initial problem was there was a damp spot in the back yard right at the fence. I tried to read the meter at the street, and then read it again 3 hours later with no one home but me. No change in the meter. So I wasn't sure it was ours.

But when I started to dig there, I found a sprinkler head. So I took the head out and capped it off. That stopped the leak. Or at least it did at that spot. Now there was a new wet spot out in the yard. Again, this was another head and I capped it off. I want to excavate and rebuild this section of the back yard anyway.

This worked for several weeks, then a new wet spot showed up about where the zone control valve should be. I have never replaced a control value, and it turns out I need to have open heart surgery, so I called Jonathon Griesheimer, who had previously replaced the main sprinkler control value for me. His phone is 512-836-6539. I didn't have the time to figure out what the problem was before I went in for surgery.

But while I was in the hospital, he came out, figured out the problem and put in a new valve. There was an indirect comment, thru my girlfriend's daughter that the valve is too far underground. Which would be expected, since we have been raising the level of part of the back yard in this area. This then took 3 hours of labor to dig everything up and replace the leaking parts. $260.

So that solves that problem, and I'll just have to wait for another 6 weeks or so before I can consider going back to work.
Posted by crazyjim at 3:07 PM No comments:

Replacing a toilet in the guest bathroom

We've had a suspicion that the toilet in the guest bathroom leaks, at a low level. But it also has a tendency to get clogged, and it's a 25 year old model, so the current ones should use much less water. And that bathroom is next up on interior remodelling, so rather than repair it, we will just replace it.

The unit we have in the back bathroom seems to be working fairly well. It's an American Standard Champion 4 model. We can get this from Home Depot, but only in white. Linda says she wants "Linen" which is an off-white, and that needs to be special-ordered. I order it on 22 May 2010. $500.93 for the Toilet -- Right Height, Elongated Bowl, plus the matching toilet seat. It finally comes in on 8 June, but then we have Lauren's high school graduation, so I don't get to installing it until 13 June.

Everything goes very well at first. Removing the old toilet is as expected. Removing a bunch of bolts. Turn the water off at the wall. Take the pieces outside, with as little water leakage as possible. Clean out the old wax ring that was under the old toilet.

Turn off the water supply to the house, and replace the cut-off valve at the wall with a new one. I have trouble putting the new wax ring in place. The box with the wax ring says to press it on the up-side down toilet and then "set it in place". But when I flip the toilet over, the wax ring falls off. And positioning the new toilet bowl over the bolts is difficult, since you can't see the bolts when they are under the toilet bowl. 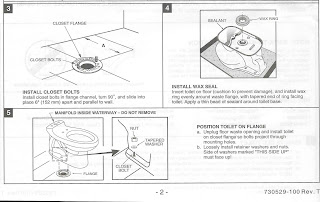 Finally get it set in place, and bolted down. Then attach the tank, and a new water supply line. Everything goes together just right -- no leaks.

Then flush the toilet the first time, and it leaks under the bowl -- flowing gently out along the floor.

So I take everything apart. The water supply line. The tank. Remove the bowl. The wax ring had shifted and half covered the hole into the floor. Remove it. Back to Home Depot to get another wax ring. Reinstall just the bowl. Test it this time by pouring water into the bowl with a bucket. Still leaks. Take it apart. The ring is pretty much in the right place. But normally when I've put in toilets, after installing the wax ring and putting the bowl on top, it's squishy as the bowl compress the wax ring into place, sandwiching it between the floor and the bowl, spreading out slightly and sealing everything. I had not noticed that this time. So it would seem that this unit is a bit further from the floor than a normal toilet bowl.

Back to Home Depot again. In addition to the normal wax ring, they have an "extra thick" one. Costs an extra dollar, but it's about twice as deep. Put that in place around the hole in the floor. Position the bowl on a couple of pieces of wood to hold it up until the bolts show through the bolt holes, then pull the wood out and lower the toilet bowl. Feel it squishing the wax ring as I press down on the bowl and tighten the bolts. This time it works; no leaks. Put the rest of it back together.

Altogether it took about 6 hours, but that included three installations, two removals, and two trips to Home Depot.