We are having the last set of the old metal frame windows replaced with wood frame windows. This is the third time we've done this and finally replaces all the windows in the house.

We are again using Renewal By Andersen, a nationwide chain of window replacement companies. A phone call to them set up a meeting for a person to come out and measure all the windows, settle on options (color, trim, screens) and provide a cost. We had 17 windows left to replace.

The total cost was $25,705. This includes the windows, the labor and materials to remove the old windows and install the new ones, and finish them. We went with an exterior aluminum cladding (Terra Tone), with an oak veneer interior. The actual window is a mix of wood and plastic that is supposed to be very stable. The oak interior will be stained to match our current oak floors and window trim, and then sealed with a coat of polyurethane. I expect to go back and sand everything down and put a second coat of polyurethane on since I believe everything needs two coats.

I put $13,000 down on 11 Oct 2010. The local company then sends the measurements off to the factory (in Minnesota or some place) which makes them to order and then trucks them down here. I got a call on 3 Nov that the windows were here and scheduled them to install them on Wednesday 10 Nov. The rough schedule suggested it might take 3 days to install them (Weds, Thurs, Fri).

Come Wednesday, no one showed up. I got a call that the crew was running late on the previous job they were doing, but would be there on Thursday.

On Thursday, 3 guys show up, and today they replaced 12 of the windows. As an example, here is a picture of the old dining room window. 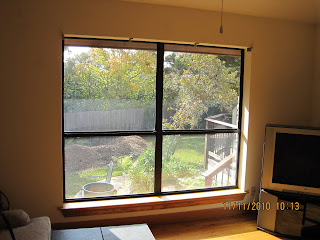 First the window panes were removed, and then the frame was removed. This created a large hole in the wall where the windows used to be. 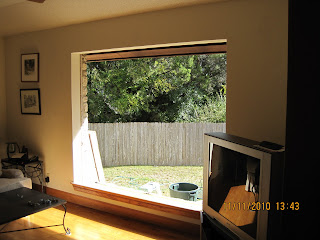 Now the new windows can be put in place and screwed in place to the framing around the old window. Spacers are constructed and put between the two windows, or in this case between the three, since we replaced these two big windows with three windows, to make them smaller and easier to manage. 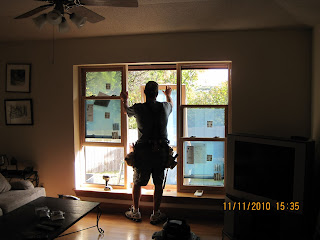 Once the windows are all securely in place, oak trim pieces are attached to cover the space between the windows, and quarter round put all around the frame where the windows meet the sheetrock to finish it off. 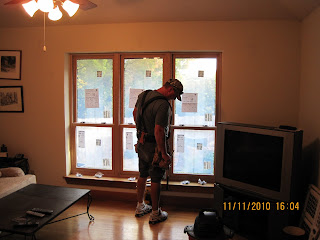 The outside of the window is filled with an expanding foam sealer, to keep it air tight, and a finished trim piece attached. Since some of these are in a stone exterior wall, someone will come over and mortar around the windows on the outside, to blend it in with the existing stone exterior.

Today, Thursday, all of the windows except the ones on the back porch were replaced and sealed. The exterior trim will be done tomorrow (Friday), as will the remaining windows. At least that is the plan.

The inspector from the City of Austin came today. A building permit had been taken out to replace the windows, and the inspector came to check things out. By and large things went well. There were two (or three) problems. One was that the windows next to the door have to be "tempered" glass, not regular glass. So this means that the window next to the sliding patio door needs to be replaced. Someone said this requirement is because you can really slam a door, and vibrate the wall, and a window within two to three feet could then break. Not at all clear that this reasoning applies to a sliding patio door.

The other problem was the windows in two of the bedrooms. We didn't have these replaced this time, but apparently the third problem was that Renewal by Andersen had failed to take out a building permit for the previous window replacement work. In the second part of the window replacement, we took out the sliding windows that were in these bedrooms, and never really worked very well, and put in two side-by-side double hung windows. These work much better, and look better. All in all, a substantial improvement. Except they apparently do not meet code. The problem, as explained, was that in a fire, they are not big enough to get out. So the inspector said they had to be sliding or casement windows. I've had both before and prefer these double hung windows.

We'll see what happens on these issues in the future.
Posted by crazyjim at 4:22 PM 1 comment: