Removing Popcorn from All Ceilings

When the house was built, the ceilings were textured with something called "popcorn".  This is a mixture of sheetrock compound (mud) and something like small pieces of paper or styrofoam which is sprayed on the ceiling and allowed to dry.  The rough nature of the result hides any flaws in the underlying sheetrock and provides a uniform, random ceiling surface.

But it's considered very dated.  So 1980's!   The current approach is to texture and paint the ceiling like the walls, which we did when the computer room was remodelled and when we re-did the back bathroom and bedroom suite.  Also I took the popcorn off the ceiling in the dining room and guest bedroom.

It takes a lot of work, and makes a big mess.  And the next rooms to be done would be the living room with a high "cathedral" ceiling and the library, where the ceiling is 12 feet, not the "normal" 8 or 10 feet.  It would seem that some form of scaffolding would be needed to rework these rooms.  So, I expected to hire someone to do this.

We were approached by a young person, a college student, for a company called "College Works Painting".  We are inclined to support college students.  They quoted $4343 to do the whole house: remove the popcorn, texture the newly stripped ceilings and paint the ceilings, which is about
what we expected, so we agreed to this.

The presentation suggested it would be done by college students, probably during the summer.  My goal had been to get it done by the end of the year, so that was fine.  The one constraint was to not do the work during April, since Linda would be recovering from her hip surgery, scheduled for April.

Linda's surgery got advanced to 18 March, and we got a call from Michael Harper wanting to start the job on 31 March (Monday). He stopped by the previous week to look everything over, and indicated it would take about 3 days.  I started removing A/C air vents, and objects near the ceiling, ceiling fan blades, light fixtures, the contents of top shelves.  No one came on Monday, but they did show up on Tuesday.  The job ended up taking from Tuesday 1 April 2014 until Wednesday 9 April 2014, including work on both Saturday and Sunday.  We were told people would be there at 7 AM, but they almost never started before 9 AM.

I took advantage of the ceiling work to remove the access panel to the attic that was in the Yoga room.  I built a frame from 2x3 wood and covered the hatch with sheetrock. 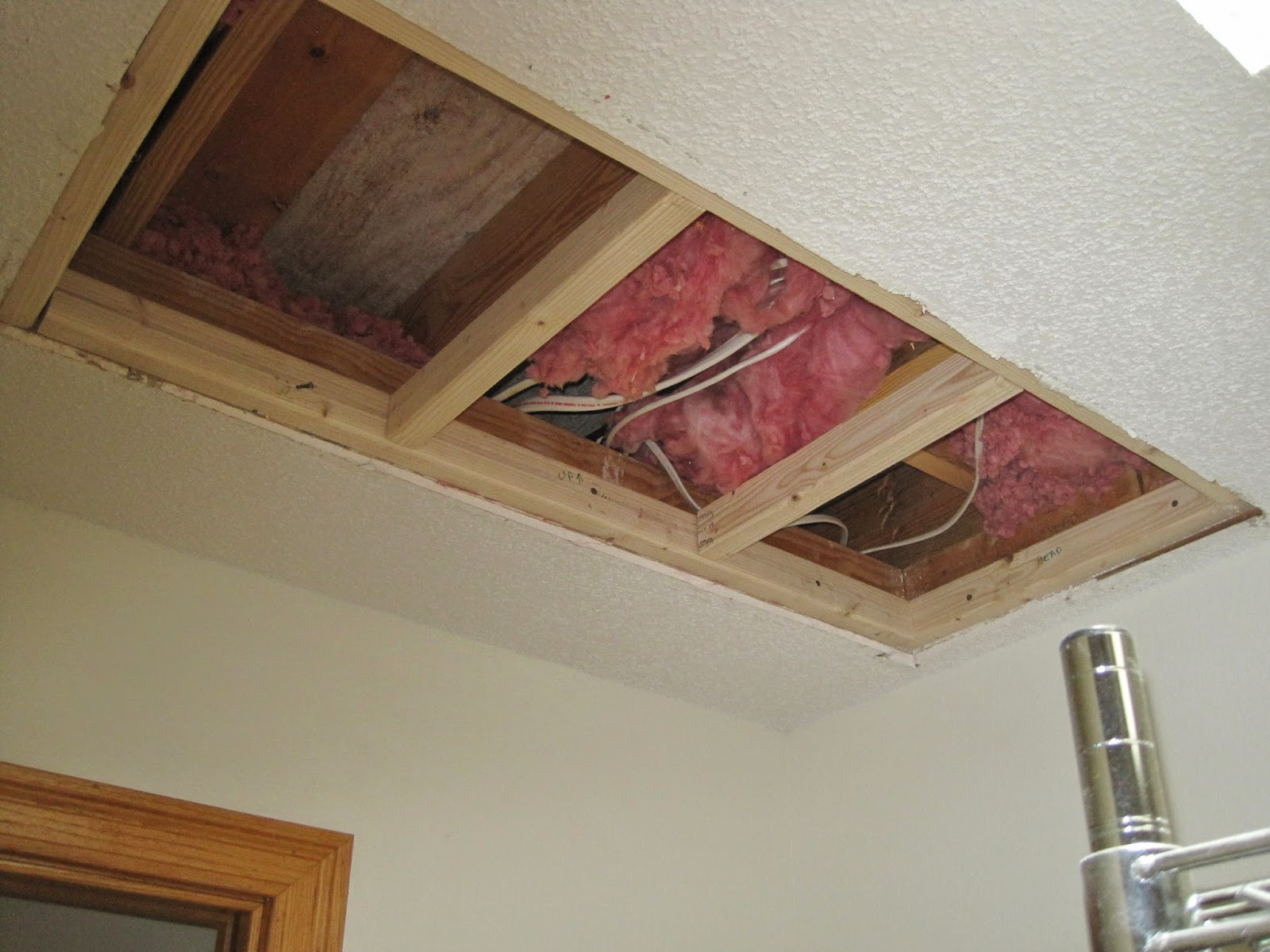 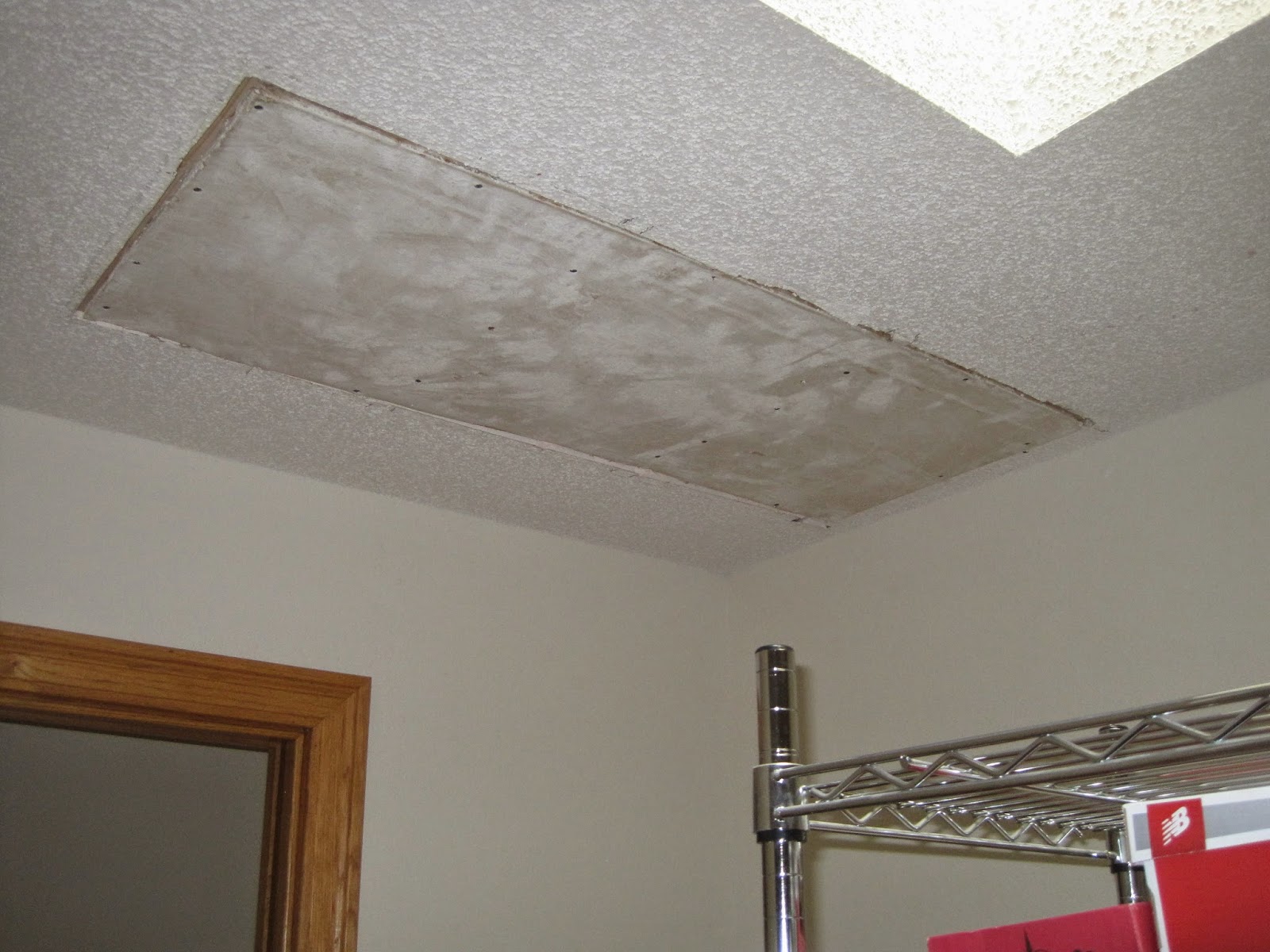 The first step for the work was to hang plastic film over the walls and floors so that it could be kept clean. 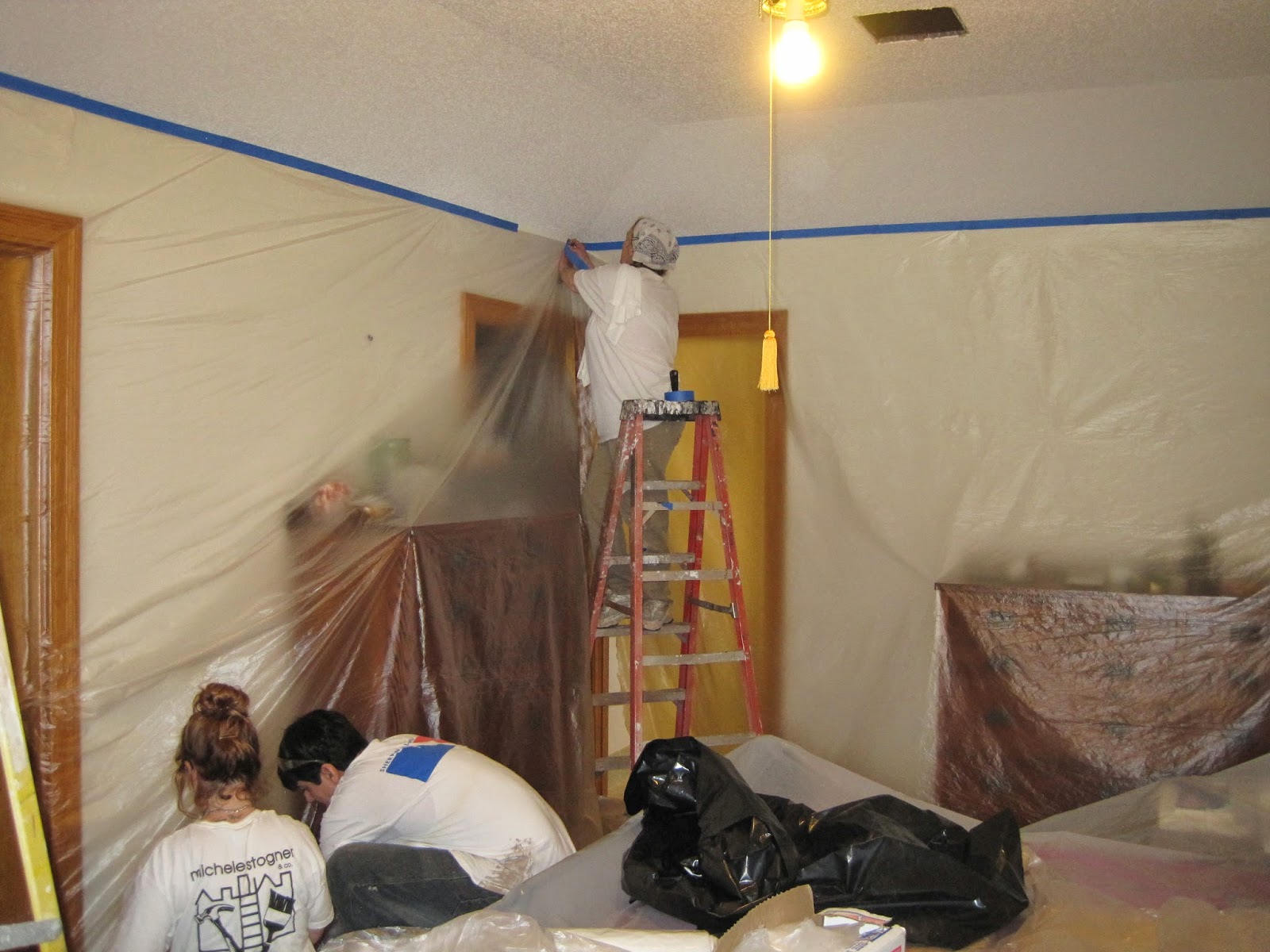 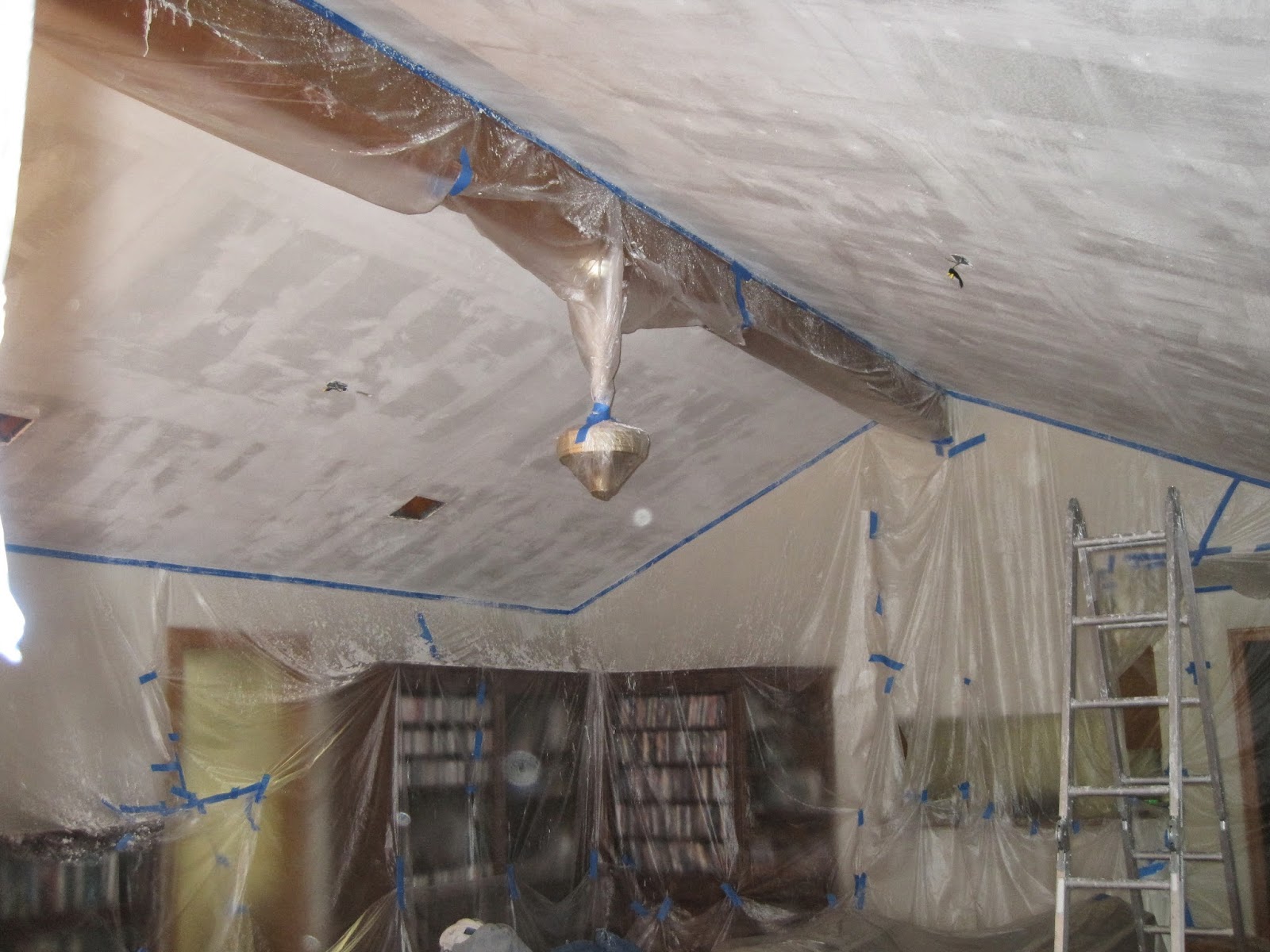 The greatest time was spent in this stage, probably a week.  Once the popcorn was removed, the new texture could be sprayed on the ceiling. 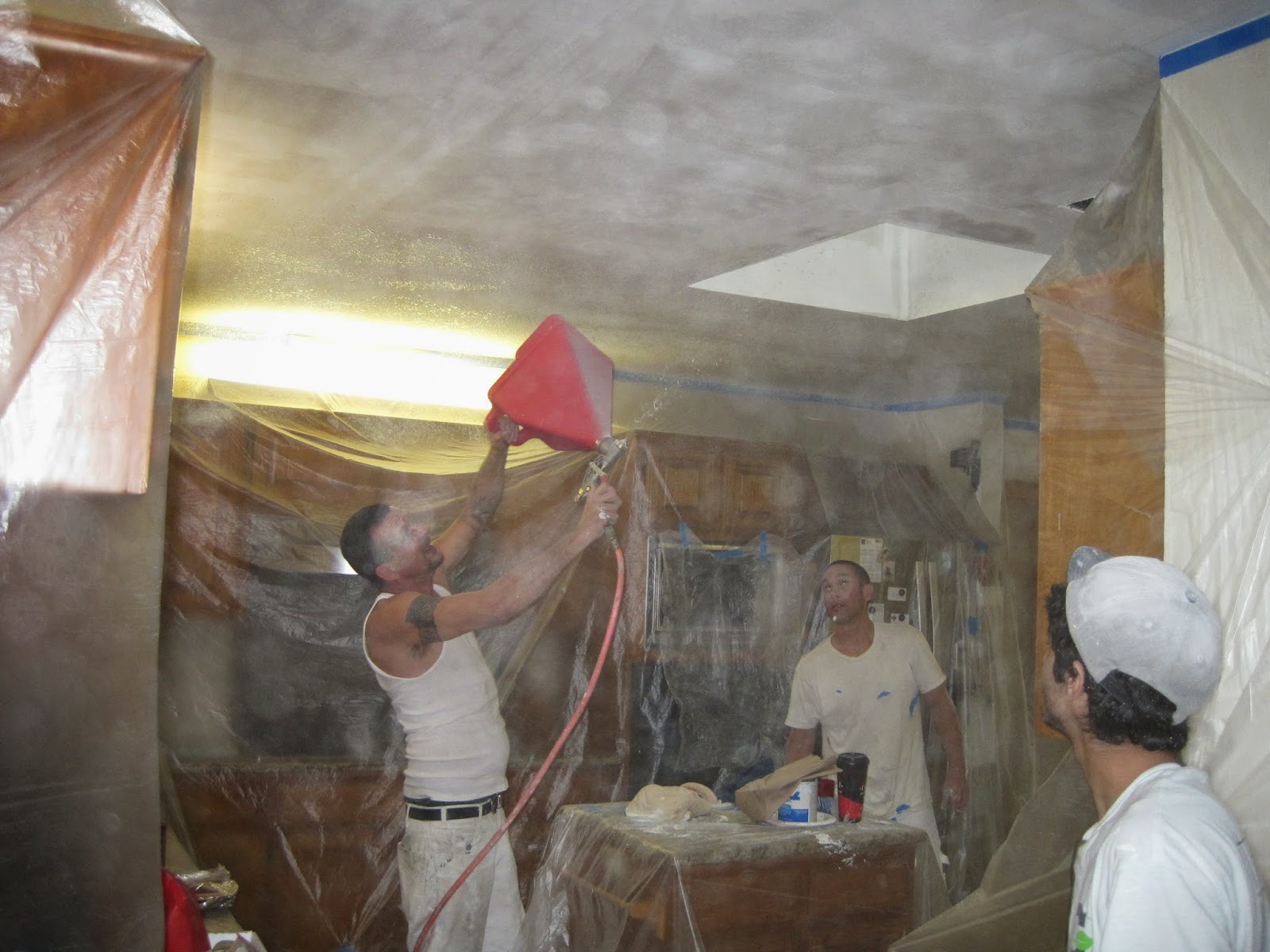 Once the texture had dried, it could be painted. 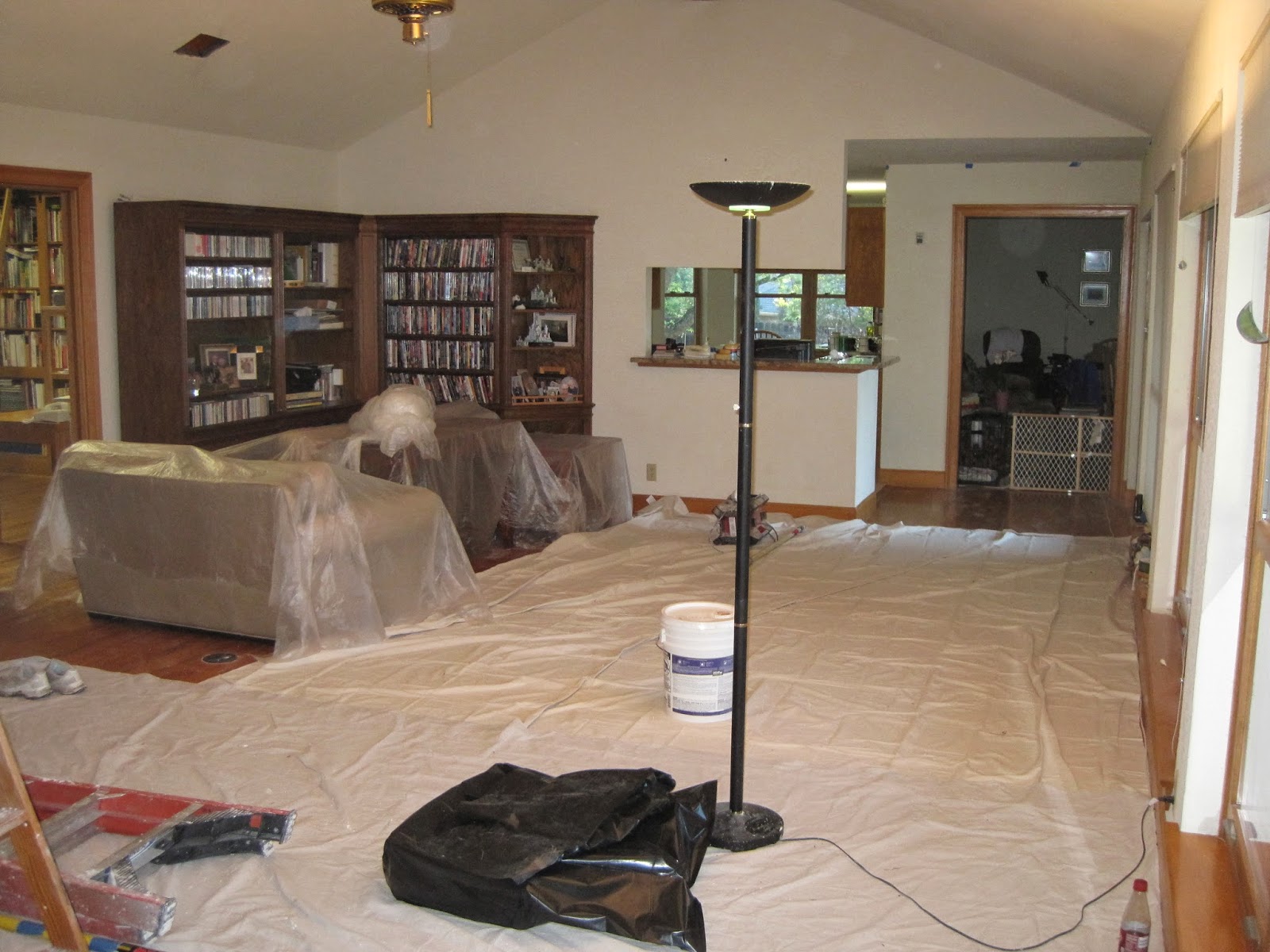 And then the clean-up can begin.  It took me days to vacuum, sweep, and mop the furniture, walls, and floors to clean up everything.  Then two days to put the air vents, fan blades, light fixtures and furniture back.

Was it worth the effort?  The ceilings certainly look better, but it cost over a week of time and effort.  They never did use scaffolding, just moving ladders around to get to the higher ceilings.

The process seemed very inefficient.  They put up plastic first for removing the popcorn, then took it down to get rid of the mess and debris.  Then they had to put plastic up again to protect from the texture spray.  Then they needed to protect from paint splatter.  The painters had the opinion that they would paint well enough that they did not need to mask the counters or furniture as they painted (they were wrong but dismissed the problems as "minor").  It seems that a better job could be done by putting up the plastic once, removing the popcorn and doing the spraying for the texture and painting once, and then removing the plastic, going room to room, rather than trying to do all the removal at once, then all the texture, then all the painting.  The painters seemed to underestimate the size of the job.

As with the dining room ceiling, we used Martha Stewart "Heavy Cream" for the color, but used Behr interior flat ceiling paint.  We needed 14 gallons, purchased from Home Depot.  They initially estimated they would need 8 gallons to paint, then, after going thru those 8 gallons, figured they needed 7 more, resulting in one left over gallon.  Part of this could be that they failed to prime the sheet rock once it was stripped of the popcorn and textured, but just started painting. 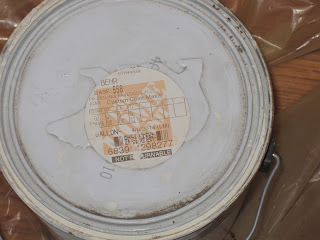