One of the neighbors had problems with their cable service.  The cable company (Time Warner Cable) came out and ran a cable down the fence as a temporary fix. 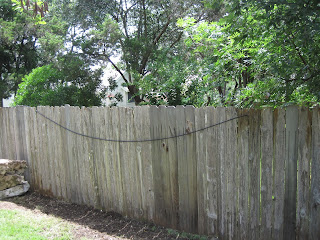 Yesterday (July 2), a crew came out to bury the cable.  The cable company has taken a longer-term approach and the current policy is to bury a 2 inch plastic conduit (at least 18 inches underground), and then run the cable thru that conduit.  Same sort of thing that we did to run the cable from their cable box/pedestal to our house.

So the plan was to bury a conduit from our current cable box/pedestal the entire length of the backyard to the neighbor's yard.  This of course tears up the grass (Zoysia Palisades) that we planted (last year?), has to go under the stone wall, thru the South bed, under the monkey grass by the greenhouse, and then thru the concrete wall under the stone edging. 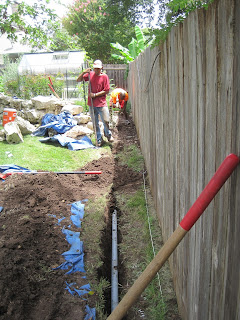 The lawn part went pretty well.  They avoided the sprinkler system along the fence.  As the photo shows, this really tore up the lawn along the fence; we will have to see if it fills back in. 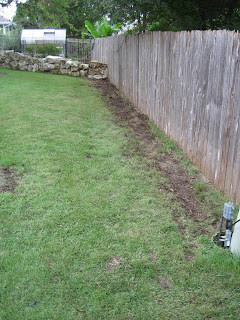 We disassembled the stone wall to allow them to lay the conduit underneath.  They helped put it back together, but the rocks are in a different order.

The South bed was more difficult.  It has an underground drip irrigation system. 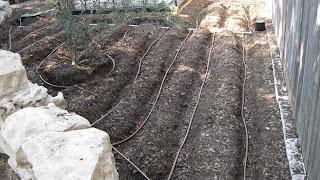 and although they may have avoided destroying the lines themselves, they broke the connections to the lines.  I will need to repair those lines.

Plus the monkey grass was dug up.  It seems this should be taken as an opportunity to move it to the West Lawn, at least the parts that were dug up. 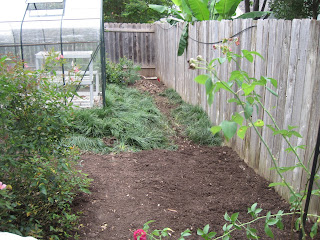 And we will need to repair the cement wall, now that the conduit is in place. 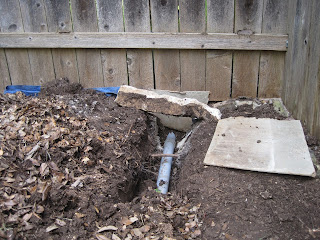 Trying to put things back after they were gone, I discovered that they broke one of panes of the greenhouse. 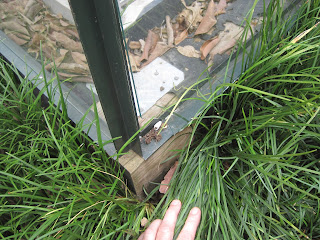 After we poured new concrete to repair the cement wall, and topped it off with new mortar work to hold the white limestone blocks in place, we turned our attention to the underground drip irrigation lines that were broke. 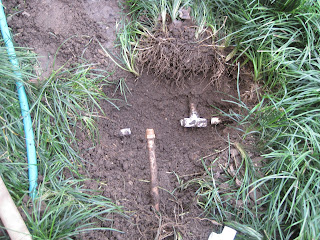 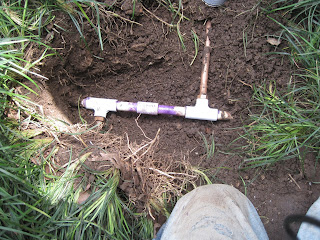 So we replaced the T-junction piece and the line in-between the two T-junctions. 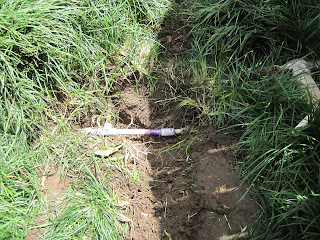 I'm not sure how we would detect if there are other places where the underground drip lines are broken, but at this point we think we have repaired them all.

At this point we can put all the dirt back.  Now we just need to water the plants to try to get them to re-grow and repair the bare spots and lines.


Note: the cable company finally came out and put the line thru the conduit in February 2016.