Continuing to dig in the front yard

Back in April, we started digging up the front yard.  We started with a trench along the property line with the neighbor.  We have continued to dig out that trench. 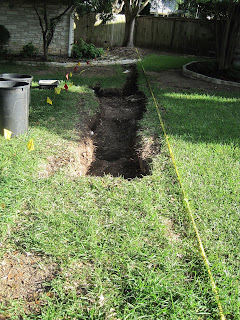 First we extended the trench almost to the street.  We stopped when we should be near the gas line.  The gas line comes in from the street, goes about 8 to 10 feet and then splits into ours (which runs down in our yard) and the neighbors (which goes over to her yard and then runs down in her yard). 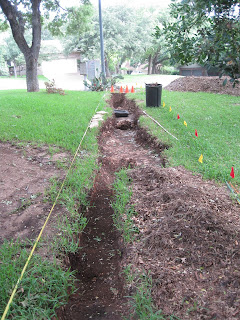 Then we went back towards the house, expanding the trench as we went, so that it was on the property line on one side, and the gas line on the other. 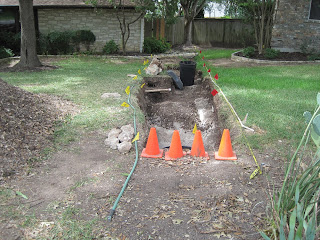 We took out a couple of big rocks as we went, as well as part of the sprinkler lines. 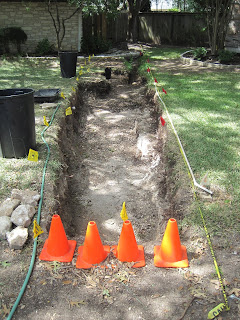 But we kept digging, removing all the dirt (which we put in a pile for later) and separating out the rock (which we got rid of). 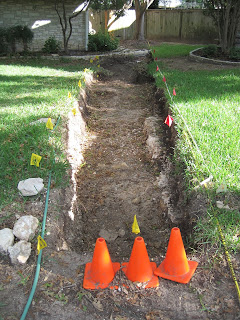 This only gets us down to the rock.  We want to have at least 24 inches of dirt, but in the back, near the house, we only have 2 to 4 inches.  So we need to use the jack hammer to break up the rock. 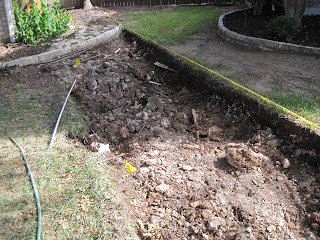 Then we remove that rock. 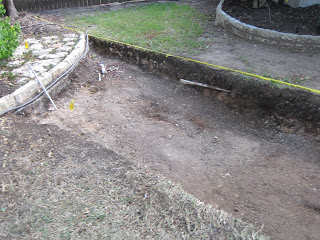 That still only gets us down about 8 to 10 inches.  So we need to continue this -- jack hammer the rock to break it up, and then haul it out, until we get our desired depth.

Posted by crazyjim at 3:37 PM No comments: