The temperatures are at record highs, and our lawn irrigation system does not seem to be working right.  Zone 6, especially, is not putting up the pop-up sprinkler heads effectively.  The further from the valve, the less it will pop-up.

So I call an irrigation company -- Sprinkler Medics -- to come evaluate my system, especially zone 6.  He doesn't think it is the valve and eventually is able to find  a leak under one of the heads. 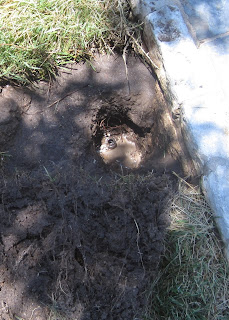 The nipple between the head and the PVC piping had broken, so all the water was leaking out down near the PVC pipe.  Apparently our dirt is now porous enough that the water all went down, so there was no evidence at ground level.

But we replaced the nipple, put things back together, and things were better.

At least for a little while.  Now it looks like zone 6 is not working well, again.  So maybe another hidden leak?

But what about the other zones?  To check, we ran all zones for 5 minutes each to see how much water they used.

This seemed to show that zone 2 used a lot of water.  Which seems unreasonable, since zone 2 is strictly underground. And zone 3 is is about twice as big.

But, letting zone 2 run, we can identify a stream of water coming from the middle of the zone, and tracing that back brings us to the leak.  The leak is coming from the box that holds the valve and other controls for zone 2.  We found the box buried in what is now very wet mud. 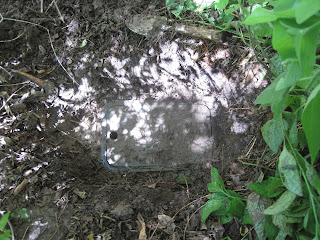 and opening it, we can see the actual leak. 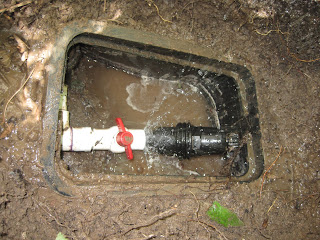 The leak is at the joint between the on/off valve and the filter for the underground lines.  It appears that the ground has settled and caused the lid of the box to press down on the filter, eventually breaking the connection to the on/off valve.  We buy another filter unit from Home Depot, and while we may be able to extract the broken piece from the end of the on/off value and reuse it, the on/off valve is relatively cheap and being underground, a pain to replace, so we get a new one of that too. 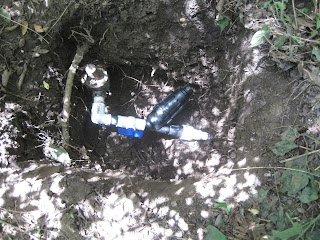 Putting that all together, we can then re-install the box and put zone 2 back  into use.

Before we do that, we should also flush out the lines, so we find the lower flush box which is now 8 inches deep, by the rain barrel. 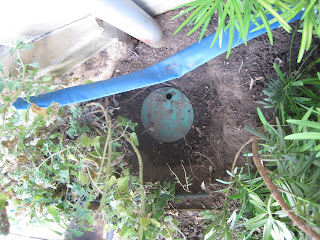 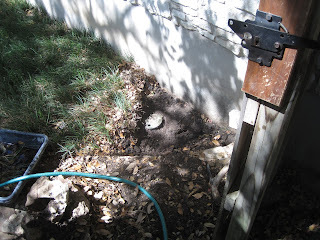 When we upgrade zone 4 and zone 6 to rotary heads, we find each of these zones also have a leaking head with a broken riser.  So 4 underground leaks in our irrigations system (so far).

Posted by crazyjim at 2:27 PM No comments: