Clearing rock from the backyard

It being Spring, it has been raining, and I can't work in the wet dirt.  But I can break up and remove rock that has been exposed.  Most of the rock is close to the fence, and that leaves little room for dirt on top of it.  Since I can't raise the lawn level, I'll lower the rock level. 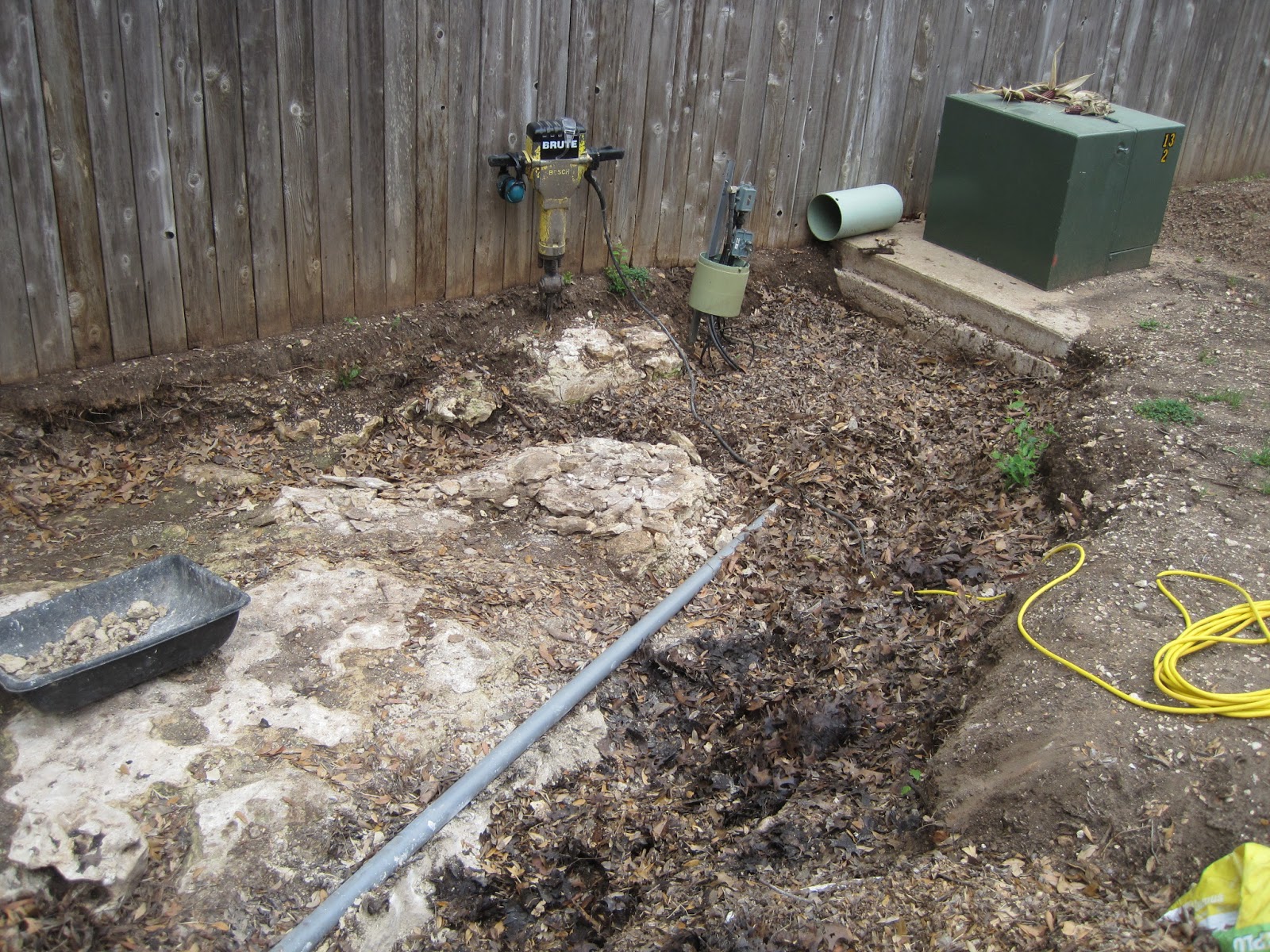 After a day of using the jackhammer, I have the worse of it broken up and removed.  This should leave much more room for dirt. 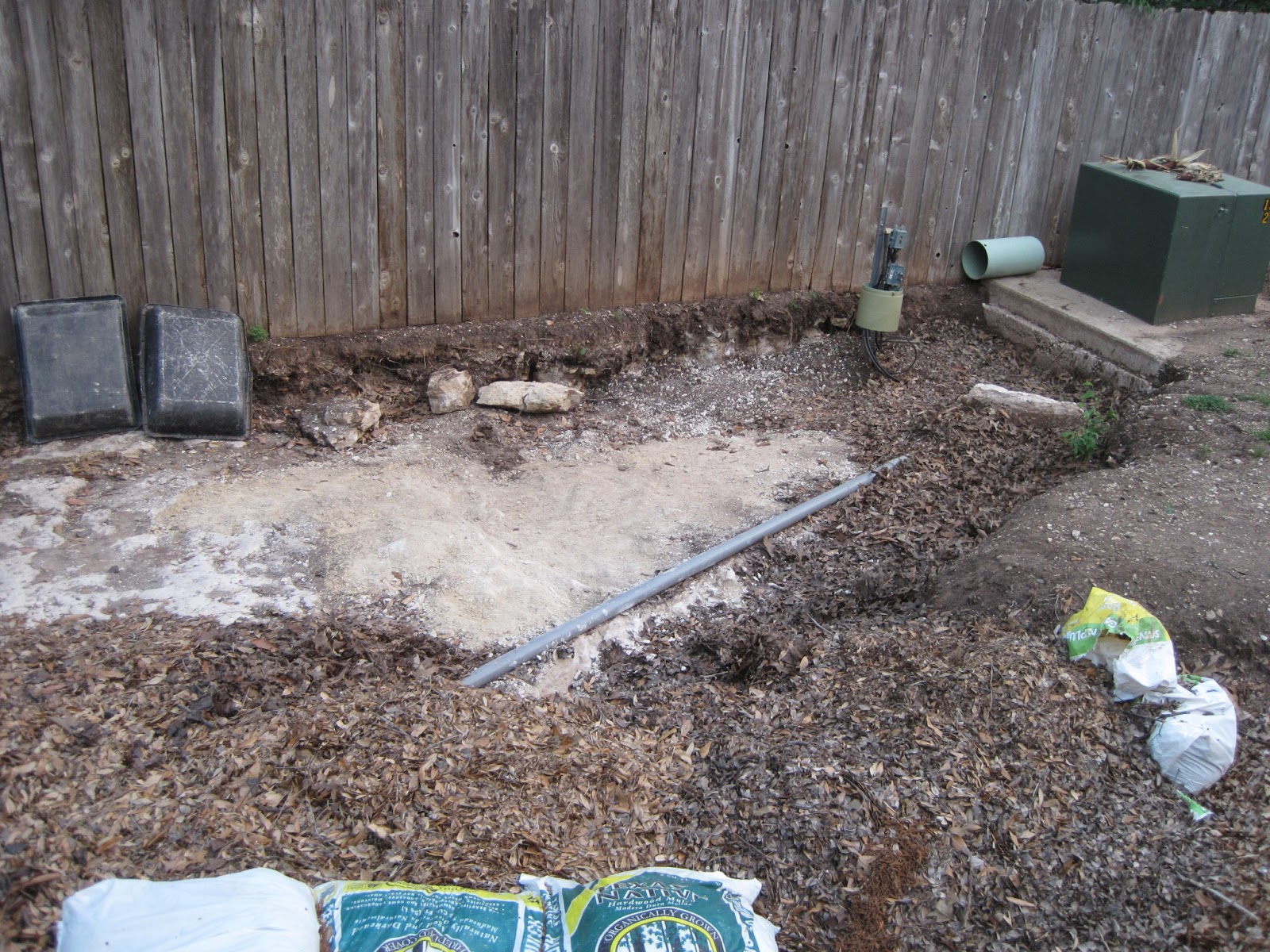 The rock rubble from this area was taken over and put in between the cement walls that define the new pathway.  I filled about a third with the results of the digging. 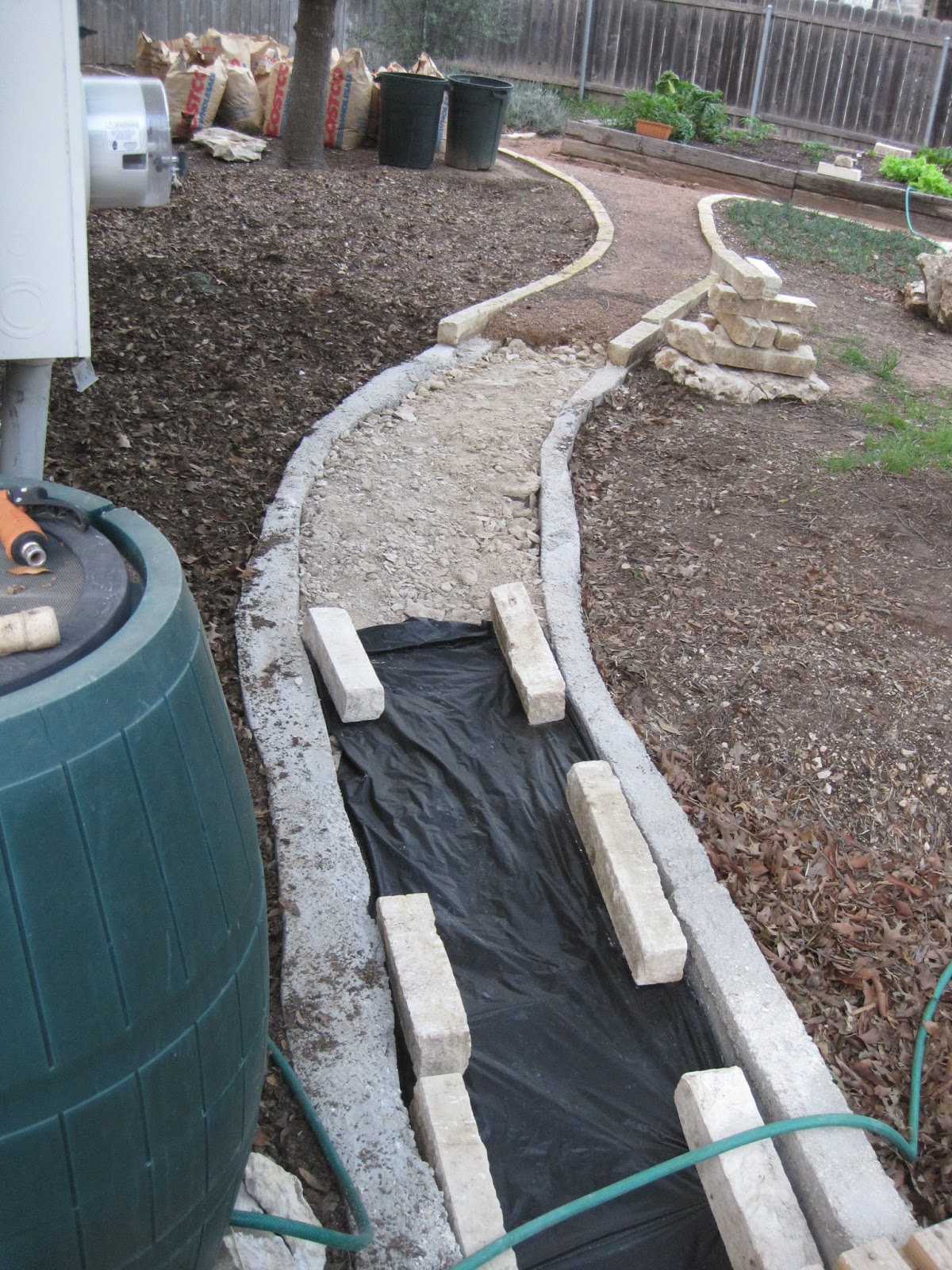 Posted by crazyjim at 3:43 PM No comments:

We have replaced the toilets in both the back bathroom and in the guest bathroom.  Part of this is that the older ones did not work all the time; they had a tendency to clog.  Plus they were from 1985, and current toilets take much less water.  The two other toilets are American-Standard Champion 4 models, and it seems time to replace our last Kohler with this newer model. 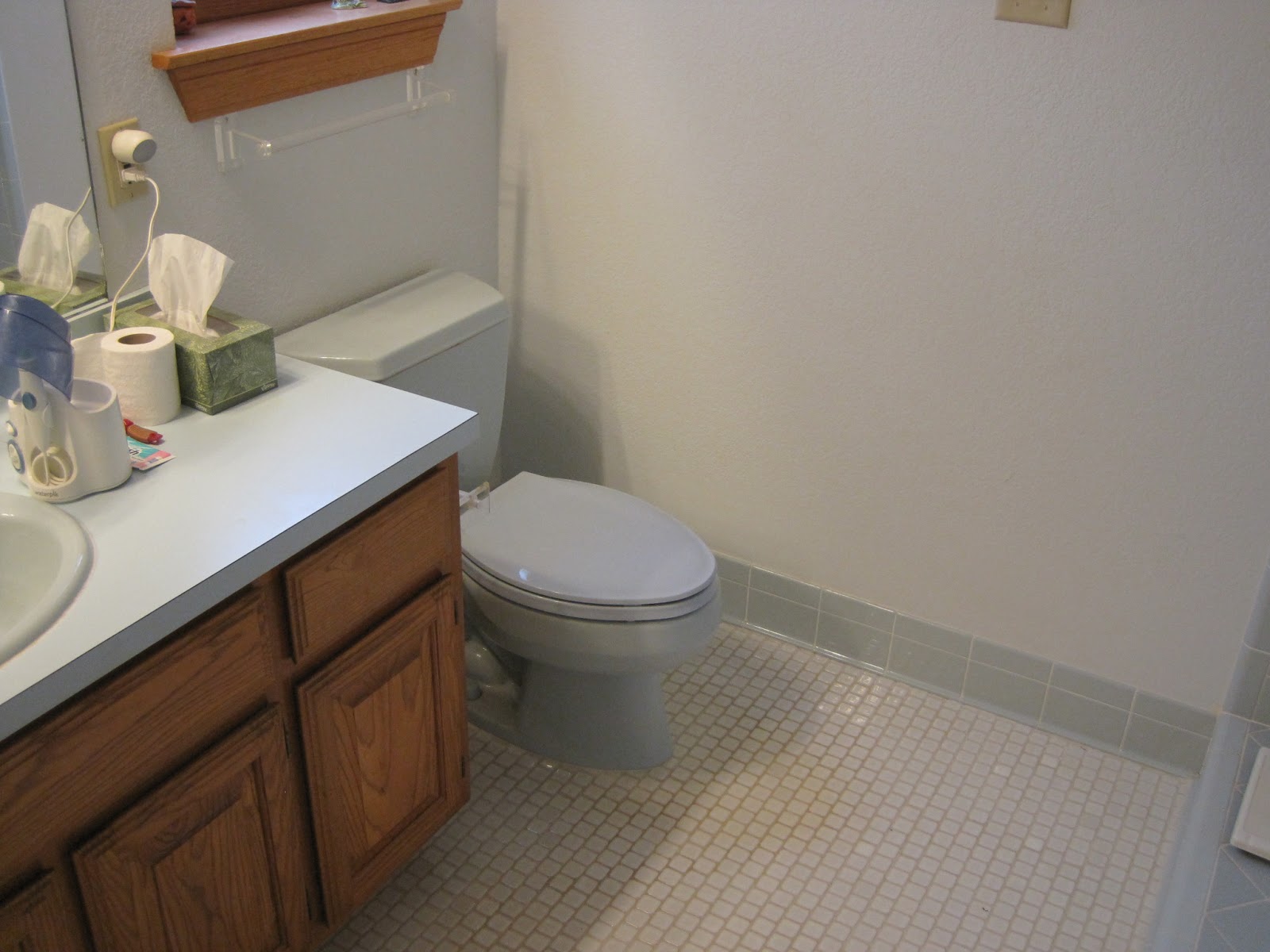 The existing toilet is blue, to match the tile in the bathroom, but Linda doesn't like blue and wants to transition to a new color scheme.  So the new toilet is "Linen", like the other two, an off-white.

Less than two weeks later it arrives, and I pick it up from Home Depot.  Boxes in boxes. 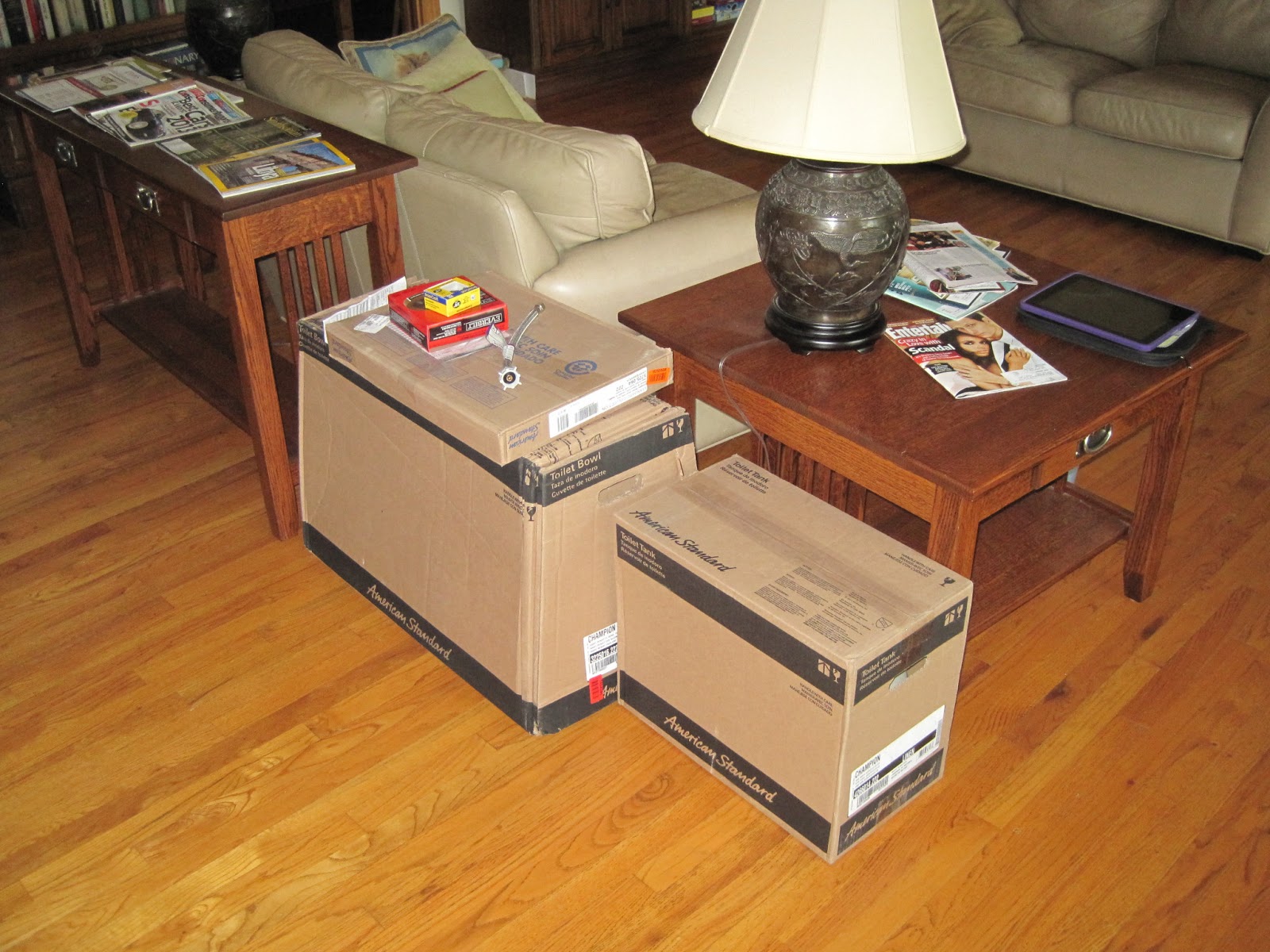 I pick up some extra supplies for the job: a double height wax ring, a new water supply line and a new cut-off value.

The first problem is to remove the old toilet. 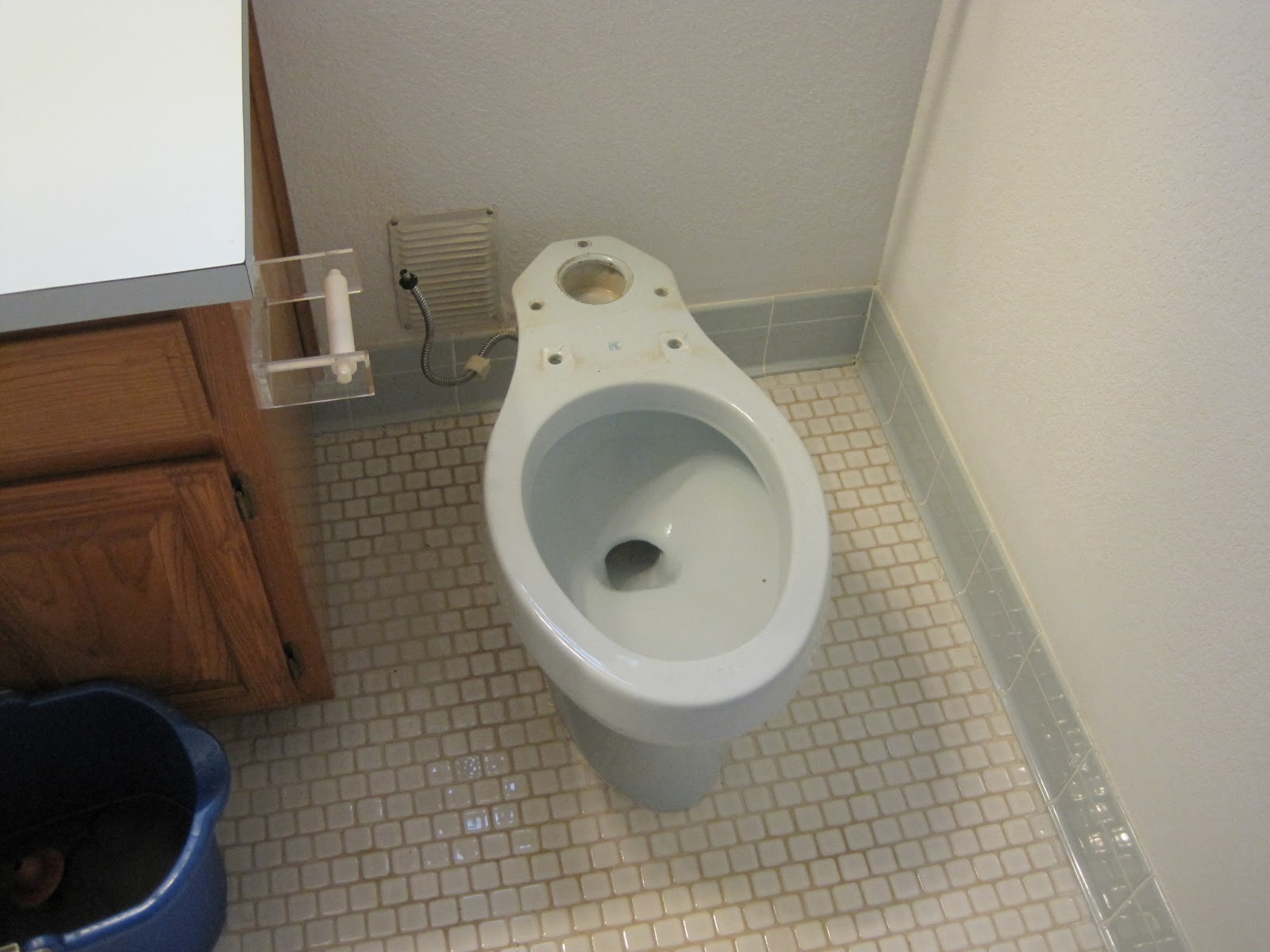 It comes apart fairly easily.  The tank is bolted to the bowl, and then the bowl is bolted down to the floor.  Turn off the water supply.  Flush to empty the tank, sponge out the bowl, and take it all outside. 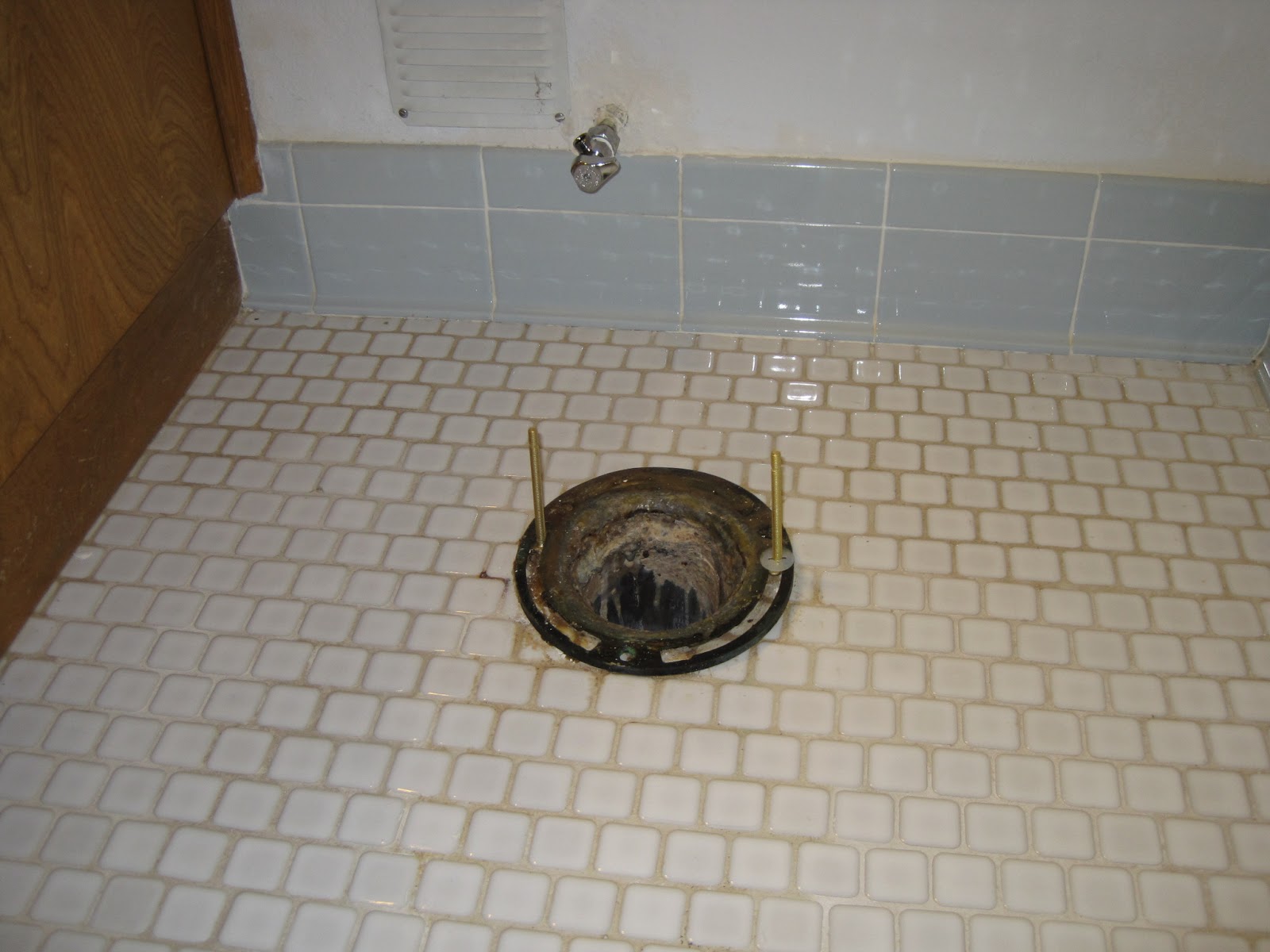 We install the new bolts, put the wax ring on the bottom of the new toilet bowl and put the toilet bowl in place. Then we can put the tank in place on the bowl and bolt it together. 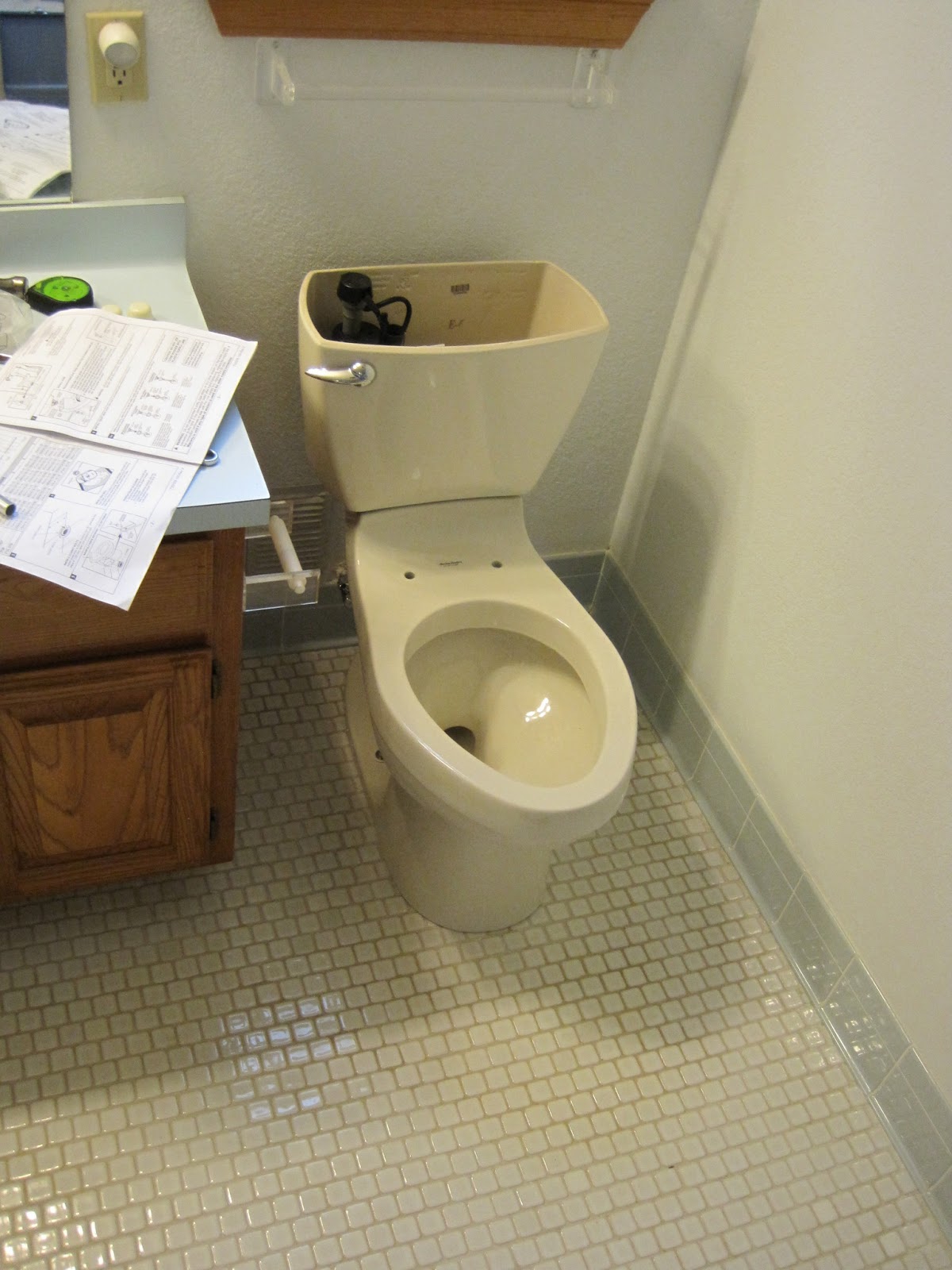 Now we can attach the new water supply line to the bowl.  It just barely fit.  The old tank was 8 inches from the cut-off valve, so I got a 12 inch supply line.  But the new tank is higher off the floor ("Right Height"), so a 12 inch supply line leaves absolutely nothing to spare.  But it is (just) enough.  No leaks anywhere.

Turn the water on.  Adjust the level in the tank.  Flush a couple of times to get things working correctly.

But to keep things from being abnormally easy, the seat that I ordered (have to special order a seat to get it in Linen), is a wooden seat.  I don't understand why anyone would want a wooden toilet seat anymore; I prefer the plastic ones.  So take the wooden seat back to Home Depot to order the plastic one.  I want one that matches the other two we have.

Home Depot doesn't have this seat, in stock, in the right color, so it has to be ordered.  For some reason, it can't be a "special order" -- I have to order it "on-line".  But the pictures on the web don't show enough detail, at the right angle, to really be able to distinguish one from another.  And, for Home Depot, it turns out they are "out of stock" on all Linen colored toilet seats.  And their system will not allow an order that is not available.  So no seat.

I take the old blue one off the previous toilet and put it on the new one, at least until we can get something else. 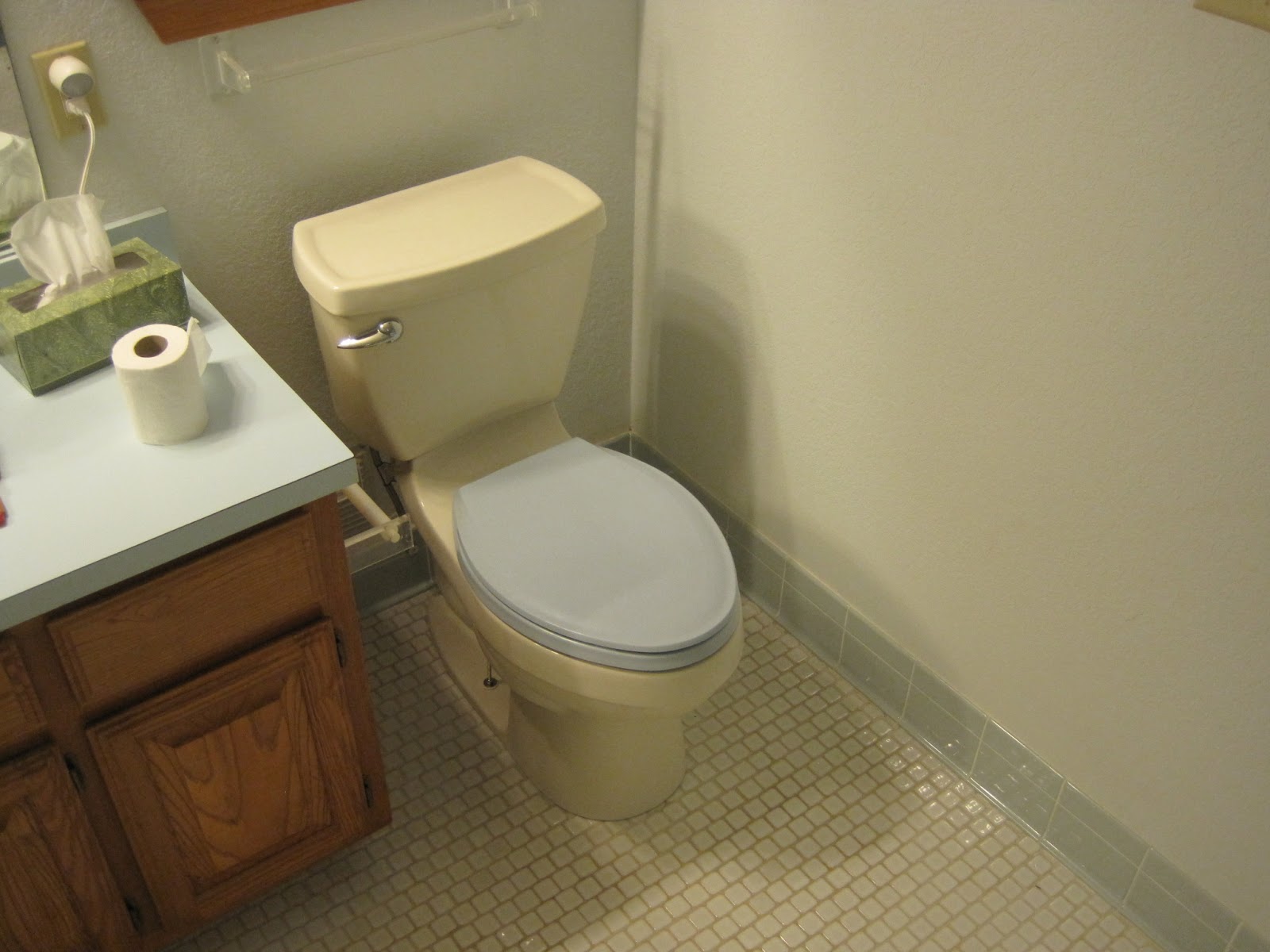 Searching the web, the American-Standard site lists lots of toilet sets, in Linen, but doesn't sell any of them.  They think Home Depot will order and sell them.  But they also think Lowe's is a supplier.  So I go to the Lowe's web site, find what I think is the seat I want -- again the pictures don't really show anything distinctive about it.  I order that, and they say it will be at least two weeks (closer to 3 weeks) before delivery.  And it costs twice as much.  But it is ordered.  They took my money and promise to ship me the new seat

And the new toilet seat was shipped, FedEx, to my place in just days.  I took off the blue seat and put on the new "linen" colored one.

But a different problem came up.  The toilet started to rock when you sat on it.  Checking, I found one of the bolts had come loose.  To fix this, I had to take everything apart, and re-install the toilet (again).  The bolts that hold the toilet down to the floor have heads that are wider in one direction than in the other.  The wider parts should be under the ring that is attached to the floor.  I drew a line on the other end of the bolt to indicate which way the bolt should be oriented, and have re-installed it keeping that line so that the largest part of the bolt head is under the ring.  In addition I have some plastic shims from Home Depot that I can use to try to level the toilet seat on the tile floor.

The problems with the toilet rocking have continued.  It seemed to be okay after it was re-installed, but over time, it got worse.  Again it seems that one bolt (on the left) has come loose.

Doing it twice and still not doing it right (apparently) suggests that I am not getting any better at this.  So it's time to call in the professionals.  I made an appointment with Allstate Plumbing, found thru Angie's List.  I called on Monday and got an appointment for Tuesday morning.  Before they showed up, I turned off the water, and emptied and removed the tank, so they could concentrate on the bowl.

B.J. Cook showed up promptly and removed the nuts on the bowl and then the bowl.  Surprisingly, not only the bowl, but also the flange came off! 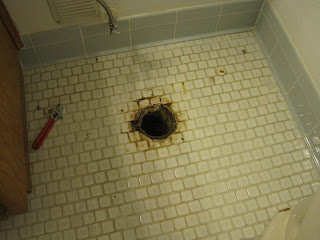 So the plumber removed the old flange, cleaned everything up, and put down a new flange.  He soldered the new brass flange onto the existing lead lining. Then he put in the bolts, positioned the wax ring in place, and re-installed the toilet bowl.  He used metal washers (and a nickel) as shims to level the bowl.  Then he re-installed the tank, hooked the water up and turned it on.  As a final step, he caulked under the rim of the toilet bowl, all the way around, to seal the bowl to the floor.  All done quickly, professionally, and for only $153.12.  A deal.  Took about an hour and half. 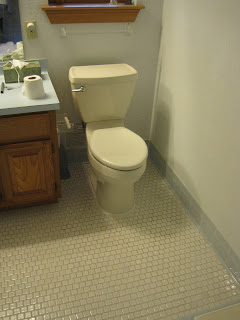 Update:  28 Jan 2019.  We had been hearing noises of the toilet flushing when no one was near it, and a dye test showed that the water in the water closet was leaking into the bowl  (and then the lower level in the water closet caused it to refill automatically).  So the assumption is that the "washer" on the flushing mechanism was leaking.  I got a replacement "American Standard Chapion 4 Replacement Seal" from Home Depot (about $6), and in about 20 minutes had it replaced. 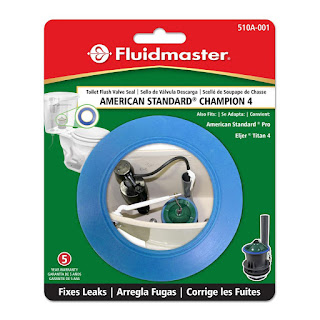