Extending the Walkway to the Back Patio

The landscape plan shows the walkway going from the gate to the raised garden and then around to the back patio. This creates a landscape bed between the walkway and the house, next to the garage and kitchen. I decided to go ahead and start this work, since it ties into the walkway in front of the raised garden, and I'm almost done with that, ready to pour concrete and fill in with rock.

First we lay out the location and shape of the walkway extension, using a garden hose to define both the left and right sides. Once that is correct, we spray paint the lawn along the hose. 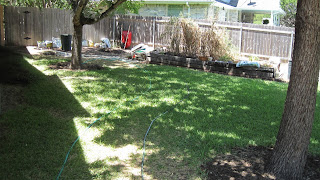 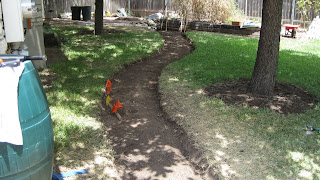 The real purpose of this, at this time, is just to see how it interacts with the walkway in front of the raised garden. We will need to dig it out at least for a short section where the two intersect, so we can pour the cement wall that defines the boundaries of the walkway. 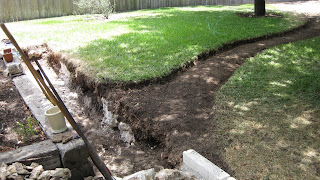 Continuing to dig out the dirt, we are struck by how little depth there is to the dirt before we hit solid rock. 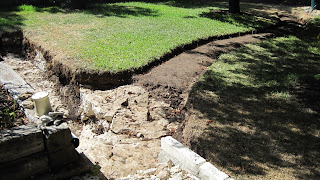 But we continue digging it out, exposing the rock where the walkway will be. 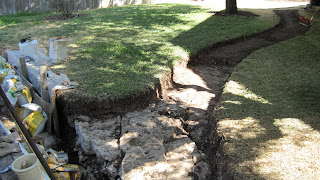 Our first attempt was to pour a cement wall directly on this rock outcropping. 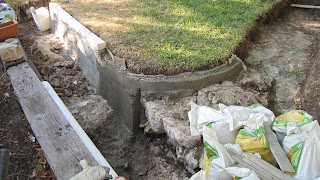 Then the idea was to dig out the dirt yard behind the cement wall, and use the jack hammer to split the rock in the yard, so we could lift it up and out -- creating a deep dirt-filled yard.

Unfortunately, it didn't work out. We dug out the dirt, exposing the rock. But when we went to jack-hammer the rock and pry it out, all the rock moved and came out, including the cement wall, leaving a big hole. 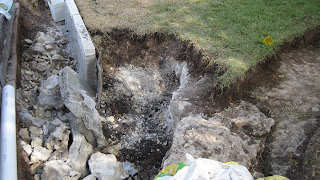 Part of the problem was probably the sharp straight edge of the wall in front of the raised garden, as well as the real shallow depth of the wall on the rock.

So the next step is to dig up the yard just south of the new walk-way area and get that rock out of the yard, using it to fill in the areas around the raised garden.