More dirt and sod for the back yard

We finished the back yard, but over time, the soil has subsided.  It is most noticeable along the sidewalk, going from the Iris bed all the way to the raised garden.  At places it is more than 3 to 4 inches down from the sidewalk.

So I brought in more dirt to raise it back up to even with the sidewalk -- 1.5 cubic yards from Whittlesey Landscape ($85.67).  I spread it all along the sidewalk, and also out in the yard around the sprinkler heads.  I've had to replace at least two sprinkler heads that stuck up too far from the soil, and then broke when run over by the lawn mower.  The lawn mower didn't hit them, but when the tires went directly over the head, apparently the pressure was too much on the region where it screws into the PVC feeder lines, about 8 inches underground.  Sometimes it is the base of the sprinkler that breaks; sometimes it is the riser that connects the two that breaks. 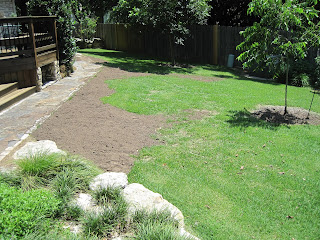 The new dirt extended out from the sidewalk to taper it into the yard.

Then I ordered more sod.  Specifically one pallet of Zoysia Palisades from the Grass Outlet ($211.09).  This had to be ordered, and was finally available for pick up on June 17, 2019.

Having a full pallet of sod was really more than I needed, but the grass between the back deck and the pecan tree (#2), and the seam between the first half of the back yard (irrigation zone 4) and the second half (irrigation zone 2) has not done well, so we got another 1.5 cubic yards of Professional Mix and spread it in these areas, and then put the extra sod down on top of that. 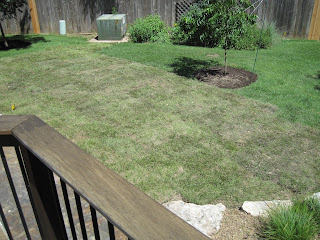 Now we just need to keep things watered and alive until it can take root.

Posted by crazyjim at 3:06 PM No comments: