Behind the Raised Bed

With the North Pit mostly done -- I'm still not sure how to finish it off -- we turn our attention to the strip next to the fence, behind the raised garden that would connect the North Pit and the South Pit. This strip is really weedy. It's only 4 to 5 feet wide and 16 feet long. It has no water supply (no irrigation), and is of variable sunny-ness, depending on what is in the raised bed. If I dig it up, I can continue the cement wall topped with a limestone brick on the top along the fence -- I'm inclined to do this treatment around the entire lot at the fence line. 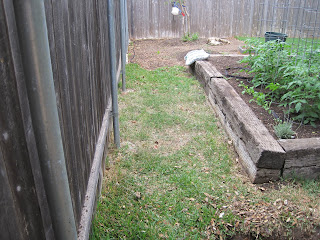 But what to put back there? It's a pain to mow, and trim, this area. It's too small to really grow something; it mainly is used as a walk area to be able to get to the raised garden.

So, instead of putting in grass or a ground cover, the suggestion is to make it a walkway. In fact, to put a walkway all around the raised garden. If we put in a walkway that matches the sidewalk around the deck, it would match. That sidewalk was dug out, and then filled with stone and sand and decomposed granite, with flagstones put on top. That seems like a reasonable treatment for this area too.

The first step then is to dig it out. Starting on this, we find big rock from 2 to 8 inches under the soil. The soil is very dry, and easy to dig out. 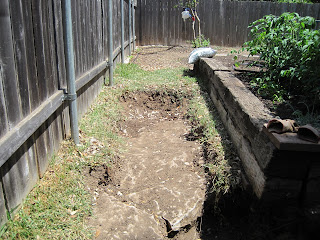 If we remove the big rock, however, we effectively trade the few big rock for lots of smaller rock. The big rock is easier to get rid of than the smaller rock. Plus there may be more dirt under the big rock, so removing it would give us a more stable finished product -- all inert rock and sand, without any shifting clay soil. On the fence side, we can do our cement wall with limestone block on top. I'm not sure what to do next to the raised bed.

It was very easy to take out the big rocks. 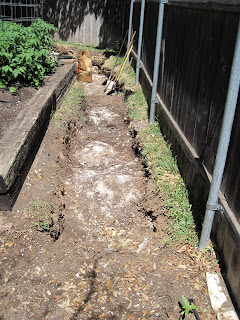 The next step was to straighten up the fence side of the trench, to pour the concrete wall and put the limestone blocks on top. We needed to buy more limestone blocks (Whittlesey Landscape Sales, 640 pounds for $51.88). Plus I would need concrete (24 bags of 60 lb. Quik-crete, $56.64 at Home Depot). 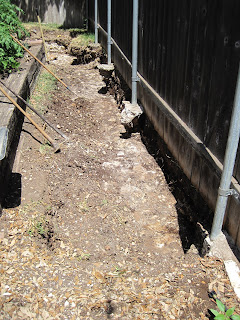 As before, I draped some black plastic on the outside, to keep the concrete separate from the dirt on that side. 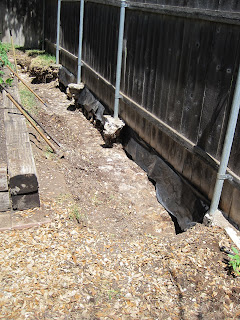 Then I used a set of 1x4 pieces of wood to keep the masonite form spaced from the black plastic, and poured the concrete in between. I used the bags of cow manure that I've been buying to mix in with the dirt (60 bags so far at 1.40 a bag, from Lowes and Home Depot). to keep the forms in place. I had to take special care around the fence posts. 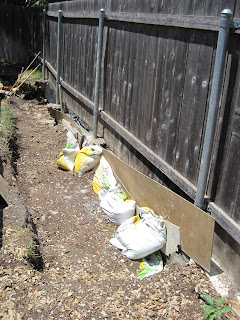 And when the forms are removed, we have our wall. 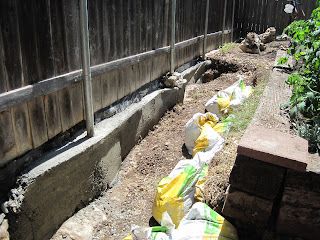 Next, a little mortar and we put the stones on top. 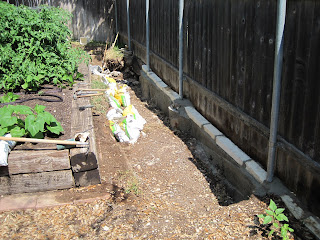 And now we need to clean up the trench, getting it down to rock with both sides straight and clean, so that we can fill it up with rock. 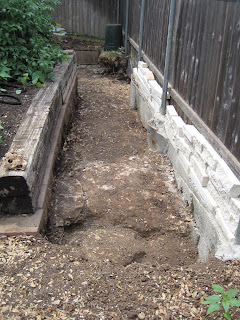 The raised bed should be all pretty good dirt, so we want to partition it off from the trench and keep the dirt in/under the raised bed. We will use landscape cloth -- a weed barrier -- as a curtain to separate the dirt from the rock.

Once the weed barrier is in place, we can start filling the trench with the rock that we dug out of both the trench and the north pit. All that rock that we wheel-barrowed out to the driveway now is wheel-barrowed back. While it was on the driveway, we were posting it to Craig's List and so most of the larger pieces are gone; we have apple-size (and smaller) pieces left, which should be good fill. 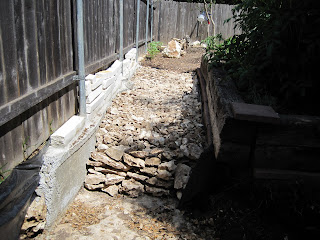 This cleans off the driveway. We need a bit more rock for fill, and then to cover it with sand and decomposed granite as a base for flagstones.
Posted by crazyjim at 12:29 PM No comments: