Digging up the remainder of the Front Yard, Part 1

There remains one patch that we have not yet excavated -- between the sidewalk and the driveway, between the front porch/patio and the Rock Wall around Fuzzy. 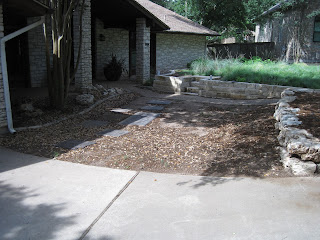 We first move the granite pieces out of the way -- our intent is to use them as stepping stones later.

We start by digging in the corner near the front door. 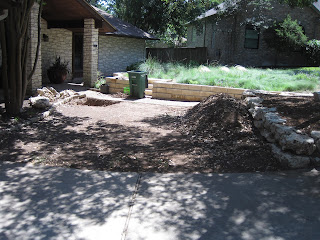 We discover a sprinkler line that runs diagonally from that corner. 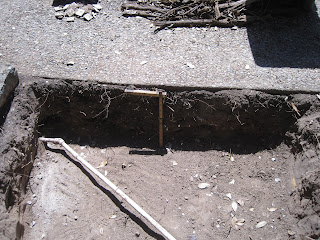 Not expecting this line, we hit it a couple of places (so it now leaks) and we will redefine the sprinkler layout for this area (Zone 11), so for now, we just take it out and keep digging. 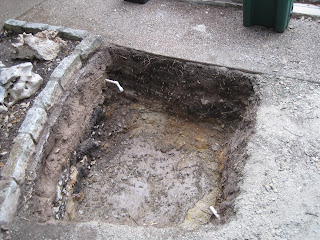 We extend this towards the driveway. 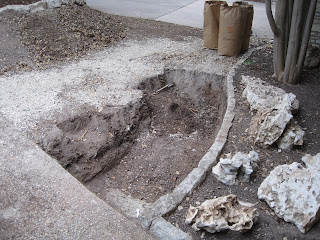 and in so doing, find another part of the sprinkler line, so we continue digging to expose it. 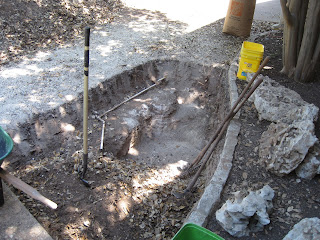 We remove the sprinkler line -- capping off the end that comes from the direction of Fuzzy. 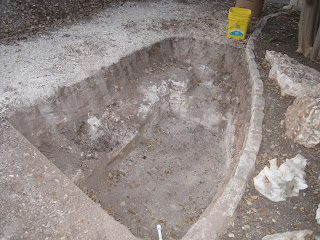 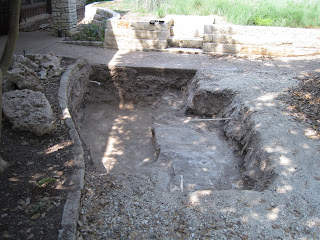 And at this point, we need to take a break, because we are expecting wet weather.

The deck was replaced in November 2003, so it's approaching 20 years old.  It is made of ipe (iron wood), on a pine or fir under structure.  The ipe deck boards are attached by what are supposed to be brass screws, looks like #8 screws with a small T-15 Torx head; one site says they are "Finish/Trim" screws.

I've notice that some some of the heads have backed out and are sticking up; some more than others.  The worst seem to stick up maybe 1/8 to 1/4 of an inch.  Trying to screw them back down does not work -- they just spin in place.

So the solution seems to be to remove the old screw and move it, or a replacement to another position not too far from the original position, where it can find strong joist wood to hold the deck board in place.

Putting in a new screw involves:

(2) installing the new screw.  At 2 inches long, these take quite a bit of screwing, so the easiest way is to put the T-15 Torx bit into a power screwdriver (I used my power drill with it's variable speed, on slow and easy).

Today I only did 4 replacement screws.  Took about an hour.

Posted by crazyjim at 8:19 AM No comments: