We have a smoke detector installed in the utility room, over the doorway to the kitchen. 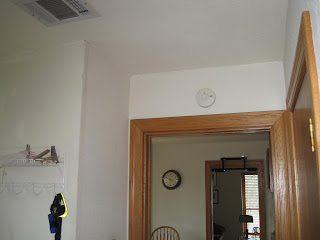 When we were cleaning up after the washing machine leakage, and replacing the on/off shut-off valves for the washer (which involved using a torch to "sweat" the copper pipes), it became obvious that it wasn't working.  Putting a new battery in it didn't help.  But it was dated as being from 2001, so it probably needed to be replaced anyway.

We have been having good luck with the Nest smoke detector units in the rest of the house, and they also provide CO (carbon monoxide) detection, so we wanted to replace the previous one with a new Nest unit.  Rather than having a battery operated unit, and having to keep the battery charged and replaced and all, we went for a wired unit, that uses the standard 120V house wiring.  But of course, there was no power up here in this area, so we would need to run power for the new Nest unit.

And as long as we are running power to this area, we could install an outlet for the dustbuster, which currently has to run a wire down the wall and around a corner to the floor level outlet.

Power will be easiest to run from the attic.  Luckily that part of the attic is not floored, so we just have to burrow down under the insulation. 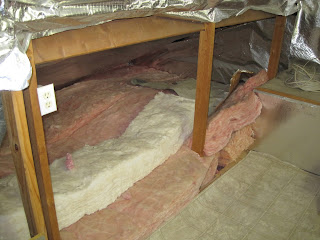 Now it looks like we have an outlet already close to this area, to provide power, but that outlet is switched (and we need raw power, not switched power), so we had to go a bit further afield to find an outlet that was not switched and tap into that to get power.  While doing that, we replaced the outlet with a GFI outlet 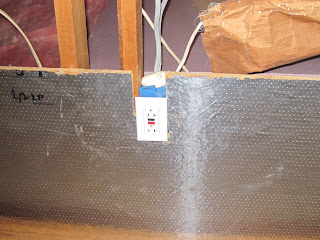 And we then lucked out with putting in the new outlet boxes.  The area over the desk in the kitchen is furred down, so the walls adjacent to that -- which are both of the walls we are putting outlet boxes in, have no back-side, and we have easy access to them (once you get below the insulation) . 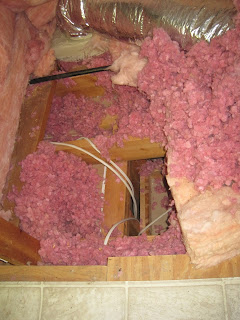 So we cut the sheetrock and put in two new outlet boxes -- one for the new smoke detector, and the other for an outlet. We put in a GFI outlet, since it is "around" water (but of course, the outlet in the attic that provides power to this outlet is also a GFI, so this is especially overkill). 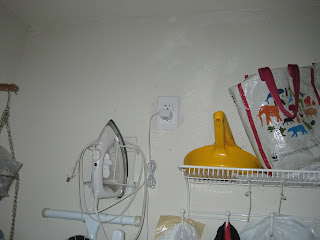 Then for the other outlet box, we attached the power connector for the Nest protect ($120, Home Depot). 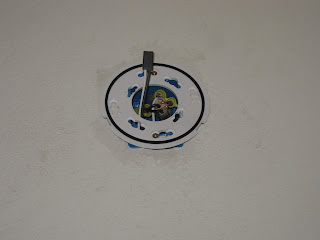 And after getting it added to our network of Nest protect units, we should have a new, working, smoke detector and CO detector for the utility room. 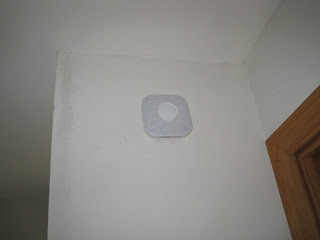 Then we can close up the insulation in the attic. 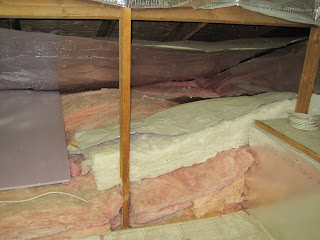 and remove the old smoke detector, to finish all this up. 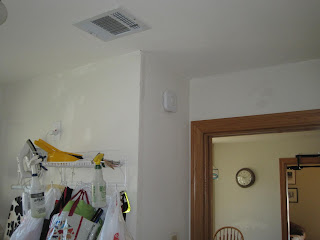