Drip irrigation for the herb beds

One of our major expenses is for water. Specifically for watering the lawn and garden during the summer. We have a full automatic sprinkler system, but we would like to see about improving it -- being more efficient in how we water.

I went to a talk put on by the City of Austin which suggested drip irrigation. In particular, this was using a drip line, rather than the individual lines to each plant. I've been adverse to doing the individual plant lines since plants come and go and it seems like a lot of maintenance to keep up with it. A drip line, on the other hand, can be used to saturate an area, but from underground, rather than by sprinkling it thru the air. This should cut down on evaporation and misting and all that. We apply the water directly at the roots, in the ground.

At the talk, the speaker said I could find all the stuff at Lowe's or Home Depot, but I couldn't. I could find the area, and some of the micro-irrigation equipment, but not the drip line and all it's supporting units. But checking on the web, I found http://www.rainbird.com and it has provided what I need. It was not easy finding the information on drip irrigation, but there is more under "Professionals" instead of "Homeowners". In particular, if you ask for a Retail Store, you get the standard Home Depot and Lowe's, but if you go under "Professionals" and "Find a Distributor", you can get the name of places that sell actual drip irrigation equipment.

I went with the XFS Subsurface dripline. This allows me to put the irrigation line under the ground and saturate an area at the root line. Plus in this part of the country (Central Texas), it is not going to freeze below ground and it's out of sight. To start with, I simply want to do 3 beds -- the beds around the back porch with my Irises and Linda's herbs. When I put those in, I used Zone 5 just for them. So I have a complete zone dedicated to these beds and can switch the entire zone.

In the following photo, notice the 3 sprinkler heads -- one in the top bed and two in the bottom bed. 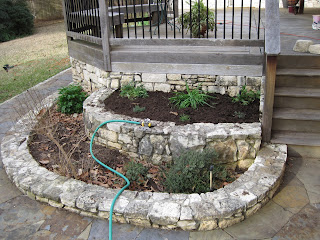 Similarly, in the Iris bed, there is one sprinkler head in the back corner. 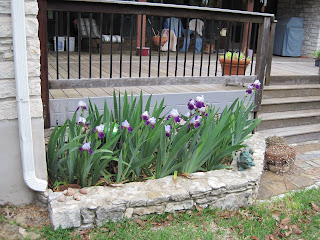 (These pictures before the change are not current -- the irises are doing badly from the freezing weather, and, I believe, the lack of water, which is why I need to get this new drip irrigation in place.) 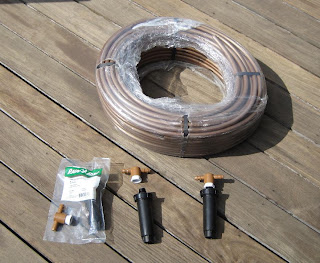 The 250 feet of dripline was $110.50, while the 1800 Retro units are $23.60 each. The idea is that the 1800 Retro units replace a pop-up sprinkler head. They thread onto a normal 1/2 threaded PVC pipe and contain both a filter and a pressure regulator to lower the water pressure to 30 psi. That means that we get out of the two outlets on the top (the "tee") clean water of the right pressure for the dripline.

I dug down in the bed to the bottom of the sprinkler risers that were there until I found the connection to the underground water supply. For the iris bed this was already a 1/2 PVC female connector, so just putting a 1/2 PVC nipple to connect the two female threaded pipes, I was able to thread the 1800 Retro unit right in. 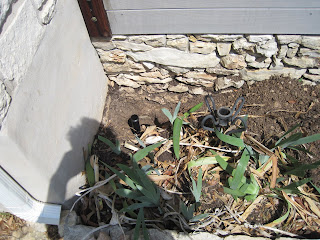 Then I cut 8 feet of the XFS dripline and pushed it onto the tee. This was the hardest part. The designers at Rainbird made it easier, because the top of the 1800 Retro unit screws right off, revealing the filter. 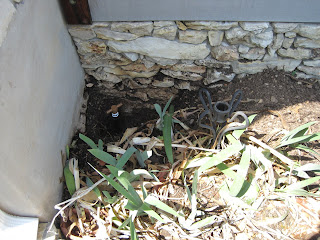 With the tee separate from the filter and housing, I was able to shove both ends of the 8 feet of dripline onto the tee, creating a loop. I could then put the tee back on the top of the filter housing, and screw it on, and then bury the loop of dripline, up along one side of the iris bed and back on the other. Then a bag of mulch to cover everything up. 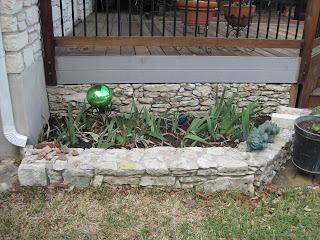 The same sort of thing for the other beds. First dig down and find the bottom of the sprinkler riser to get to the water supply. In this case, it turned out the connection was a 3/4 inch female threaded PVC, so I had to get two 3/4 inch male to 1/2 inch male adaptors. Using them it was simple to attach the 1/2 1800 Retro to the 3/4 inch water supply, about 12 to 14 inches down from ground level. 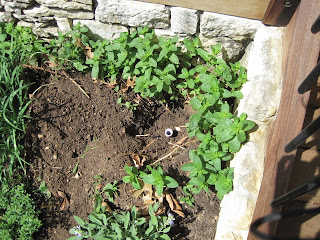 The upper bed needed about 12 feet of dripline, but I mis-measured (at the bed) and thought it was 13 feet. Once I had put the dripline on the tee, it became obvious that the dripline was too long, so I had to take it off one end of the tee and cut it a foot shorter. It was extremely difficult to get off the tee, so for the lower bed, I only put it on one end, then laid out the dripline to the right length, and put it on. 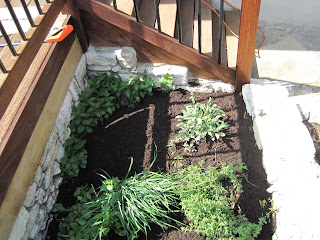 The bottom bed was much the same, but longer -- 24 feet of dripline. And it originally had two sprinkler heads, so I used one and capped the other off. 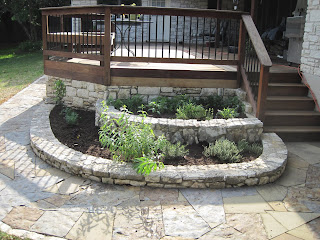 As with the iris beds, I buried the dripline a couple inches underground and then put a bag of mulch (4 bags altogether), over the top, to cover the dripline.

Everything went pretty smoothly. I started at 11:00 AM and was finished by 6:00 PM, and that included two trips to Home Depot for the 1/2 to 3/4 adaptors and for the mulch and lunch. There were two problems.

Just as I was screwing on the top of the last 1800 Retro, for the lower bed, I tightened it down and heard a "snap". Something had broken under ground. Luckily it was not the $24 1800 Retro, and it was not the water supply, it was the 1/2 to 3/4 inch adaptor. I was able to get it out of both the ground water supply end and the bottom of the 1800 Retro and had to go back to Home Depot to get another one (I got two to be sure I had an extra). So that was a delay, but worked out fine.

The other problem was that when I turned on the sprinkler zone, at the box in the garage, to test it out, it seemed to do nothing. Which is sort of what is expected. But walking over to the iris bed, I could hear a noise coming from the corner where the 1800 Retro and tee are. Digging it back up, I could see it was spraying water all over from the joint between the housing and the screw on top. I took it apart, cleaned it off and put it back together, tightening everything by hand. Same problem. I eventually used a pair of channel-locks (a very large pair of pliers) to tighten the head on as much as possible and that stopped the leakage. I dug up and checked the others; they were all right. I'm not sure why 2 of the 3 worked fine with hand tightening, but the third needed extra tightening.

Now the system is in place. You can't tell if it is on or not. After running it about an hour, most of the beds still seemed very dry, so maybe it needs to run longer or maybe this is not the best solution. The sprinkler system is set to run twice a week and zone 5 gets to run for an hour each time. We'll see if that is enough to keep the plants happy.

Measurements suggest that zone 5 uses 60 gallons an hour when it's running. I measured it twice. Once it used 57.6 gallons; the second time it took 66.8. With about 45 feet of dripline, this would be about 1.3 gallons per hour per foot.
Posted by crazyjim at 6:42 PM No comments: