Head waters of the new Walkway 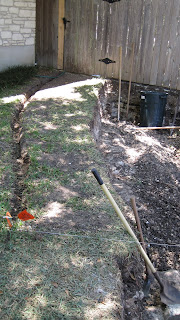 We've "outlined" the walkway using the grubbing hoe on the one side and have expanded the North Pit over to the curving edge of where the walkway will be. The next step will be to dig all the dirt out, put in the two "walls" below ground level that will define the two sides of the walkway, then fill the space between the walls with rock and put down decomposed granite, as a base, and the "Oklahoma Thin" flagstones that we used for the walkway around the deck.

First step is to dig. I'm starting the excavation near the raised garden, working towards the gate. That way the gate can continue to be used until I dig out the part just in front of it. If I then back fill at that end first, the gate will be unusable for the shortest period of time. 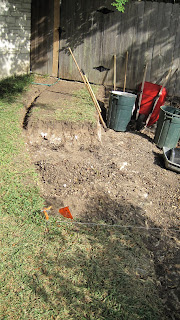 The excavation goes thru the traditional (a) dirt under the grass, (b) construction left-overs, and (c) native clay. All of these layers, especially (b) and (c) have random rock in them, which we pull out. Then we hit the first layer of rock. We could use this as the base of our walkway, or we could take it out and go down another 6 to 8 inches to bedrock. 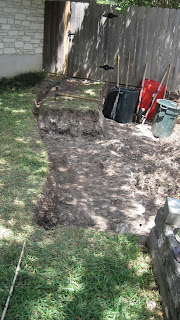 Part of the last 6 to 8 inches of rock comes out easily, so we removed it. But we are planning on leaving most of this layer in place and putting the walkway on top of it. 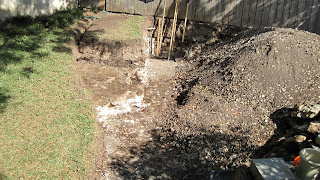 Once we have this much excavated, we can start putting the walls in that will separate the dirt beds from the walkway. We start with the outer wall, next to the un-excavated area. We use a piece of black plastic on that side to separate the concrete wall from the dirt. When (if) we eventually get to digging up that side, the plastic should allow a clean separation between the wall and the dirt. 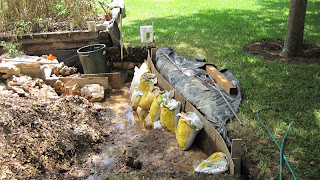 Putting the wall between the North Pit and the walkway is more difficult because it has to be supported on both sides. It's hard to get either wall up high enough because our forms are only 16 inches tall. I'm doing it in layers, so I can pour concrete, wait for it to firm up, then remove the forms and raise them up to pour the next layer. 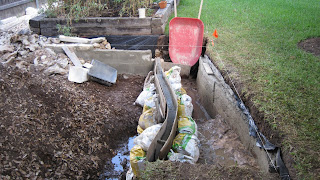 I added a piece of 4 inch PVC irrigation pipe stretching from one side of the walkway into the North Pit. This is to allow wiring or pipe to be run from one side to the other in the future. It is expected, for example, that we will want to run 3/4 inch or 1/2 inch irrigation for Zone 3 from the valve controller on the once side into both the North and South Pits, to provide a water supply. 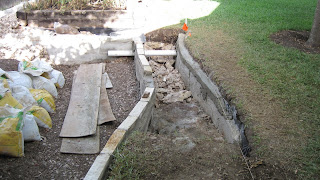 Once the concrete was built up enough, I can then mortar on the limestone blocks on the top, to finish the wall off next to the North Pit. Now I could put the dirt back in, and let it settle before planting. 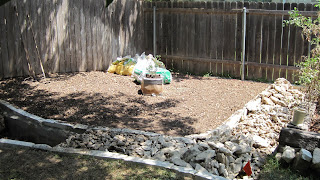 This should finish the North Pit, with the exception of putting in irrigation and planting. Both the North Pit and the South Pit should be Zone 2 of the sprinkler system.
Posted by crazyjim at 12:38 PM 1 comment: 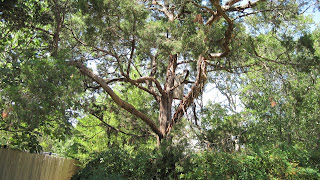 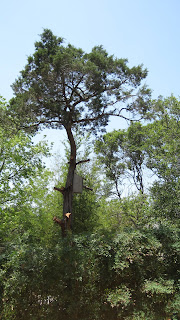 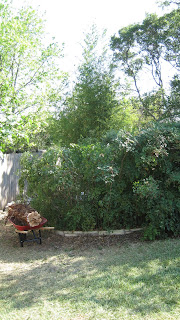 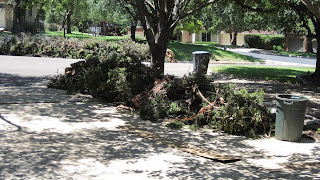 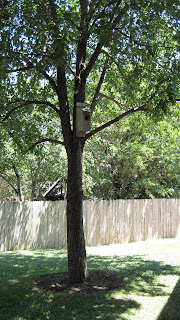 With the master landscape plan in hand, I know what to do with the North Pit. Next to the raised garden, we want a walk-way, similar to the walk-way around the back deck.

The first step is to dig out the remaining dirt next to the raised garden. 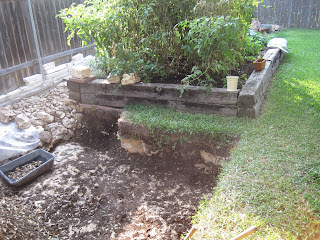 Next we need to build the wall that will separate the North Pit from the rock-filled walk-way. We first clear a path for it. 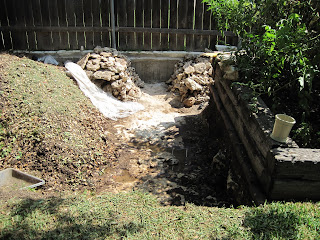 We could pour a pure concrete wall, but computing it out, it appears to be less expensive to use concrete blocks. The concrete blocks are 8 x 16 x 4 inches. With the limestone block on top, the wall should be about 20 inches tall. With blocks of 8 inches, I can do 16 or 24, but not 20. So I figure I'll pour about a 4 inch base in concrete, which will even out the uneven rock surface and give us the right height. 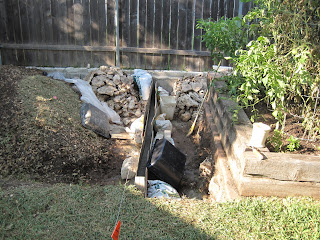 Once the cement base has set, I can mortar on the cement blocks. I leave a gap in the lower rank of cement blocks, in case water needs to flow from one side to the other. This is not expected to be a problem, but just in case. I can't finish the entire wall, since it needs to tie into a similar structure that I haven't excavated yet. 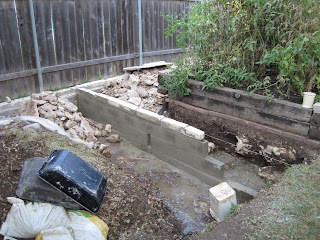 Once the wall sets, I can put all the rocks on the right side and start to spread the dirt on the left side. 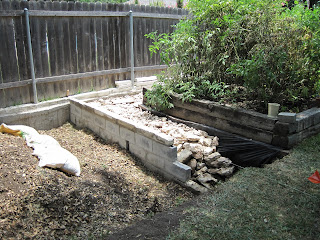 Posted by crazyjim at 8:03 AM No comments:

Once I started working on the North Pit, it became more obvious to me that I needed a long term plan of how to work on the yard. While I feel there is value in digging up the yard, removing all the rock, and improving the soil, I'm not sure that it should be returned to just grass once all this is done.

So we contacted a Landscape Designer, Liz Klein, from DesignMyYard. This started in March. Ms. Klein came over and walked the yard with both Linda and me, listening to what we wanted and seeing what we had. There were several sessions where she presented ideas and listened to our comments.

The result was a landscape plan for us to work on. While Ms. Klein normally seems to both come up with a plan and then arrange for it to be done, in our case we were happy with just the plan, and our own intentions to implement it over a longer time period. I'm not sure I care about reaching the goal of the entire landscape plan, but it gives me a direction to go when I need to make decisions about current work.

This plan shows that, for the current work, I will put a walk way from the fence next to the garage, past the North Pit, joining for a moment with a walk way around the raised garden, and then on around to the existing back patio/deck walk.

The area between this walk way and the house will become a bed for plantings. Part of this bed has already been excavated, but I will need to expand that. In addition, I can expand the North Pit slightly to lay the foundation for the walkway.

It's getting very hot now with Summer coming on, so most of the plantings should probably wait until Fall. That gives me several months to get things ready.
Posted by crazyjim at 6:39 PM 1 comment:

Changing the irrigation in the driveway peninsula

One side-effect of the digging in the North Pit is that it exposed part of the irrigation pipe for Zone 1. Zone 1 is mainly the peninsula of dirt that is between our driveway and the neighbor's driveway. I dug it all up and redid the sprinkler system for Zone 1 some time ago. The controller for Zone 1 is near the fence between the front and back yard.

So to get the stubs of the sprinkler lines out of the North Pit, I took a week to re-do these lines in front of the fence. Looking at this area, however, it seems silly to do a general spray head. The only thing in this area, near the fence between the front and back yards, are 4 crepe myrtle trees. Most of the peninsula is a few trees -- crepe myrtles and Bartlett pears -- and rocks. The dirt is covered with mulch. Nothing much will grow there, because of all the shade from the trees.

So rather than re-routing a line to the spray head, I took the spray head out, and put in bubblers for the 3 crepe myrtle trees that it should be watering. This gets more controlled amounts of water directly to the base of the trees, which should be much more effective.

The first thing to do was to run a water supply line over to the middle of the crepe myrtles. 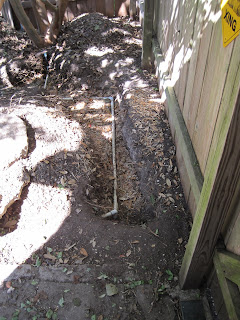 Then, we ran a line down the middle, between the trees. We branched off this middle line to run a line to each of the trees, and put a bubbler on the end of each of them. 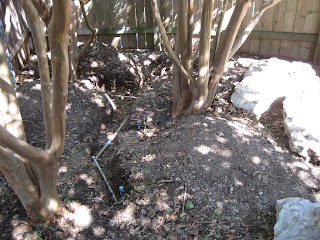 Then we covered the entire area with mulch. It took 10 bags of mulch to cover this area, where we had been digging. 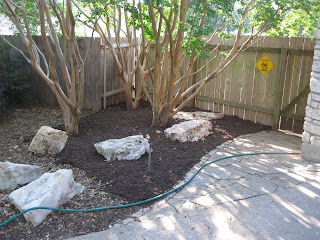 It took 15 more bags to cover the rest of the peninsula. 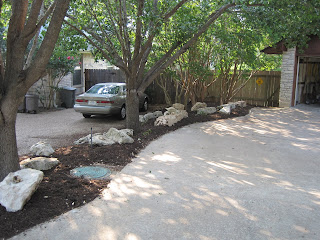 This little back corner of the front yard, although it is adjacent to the rest of the peninsula has apparently never been excavated. This makes sense, since doing so would damage the root system of the trees. But for this limited digging, I found a lot of construction level rock and debris. I removed everything I could, and added a bunch of leaves and compost in putting the dirt back in.
Posted by crazyjim at 6:13 PM No comments: