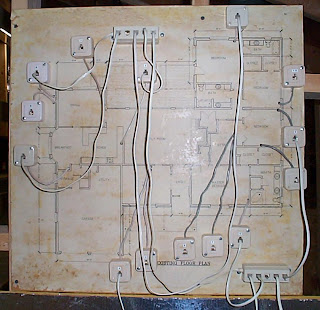 The house at 10601 Barker Ridge Cove was built to order. At the time Jeanne and Jim were married, with two children. Their previous house (706 Harris Avenue) was only a two bedroom house, and the children were to the point where they needed their own rooms. So Jeanne started looking for a bigger house.

She found a house she liked -- a newly built house -- but it was on a busy street, so we arranged to have it built on a different lot, on a cul-de-sac. The lot was bought on 5 Nov 1985 ($50,000) and we contracted to have the house built on 20 Nov 1985. The contract for the house was basically to build the same house layout, but with some changes:

1. All hardwood floors (no carpet). This was to try to help with seasonal allergies.

There were a number of change orders during the construction -- at least 4 -- that were meant to improve the bathroom and kitchen fixtures and such. These cost about 10,000 above the contract price, and were paid directly to the builder during construction.

I have a complete file folder covering the building itself, but, at least for now, that is another story altogether. The construction was mostly adequate, but not outstanding. Although the builder was a "custom builder", he really did not understand how to build a really quality house -- he just repeated the same old things he had always done. His ability to communicate with his customer was marginal. All in all, he was, at best, a mediocre builder.

The result is a pretty good house, but with some serious drawbacks. The house is too low -- it's built on the side of a hill, with the asphalt of the cove above the house, so you look down on the house from the street. This makes it difficult to bring in better dirt for the front lawn, since there is not sufficient clearance between the top of the yard and the top of the slab. If the ground level were to be higher, dirt would be against the stone wall of the house, which would increase the risk of termites and other bugs in the walls. The slab should have been an extra foot thick, which would make the house a foot taller. This would improve the view from the street and allow more, better soil in the front.

A thicker slab would also have helped limit the small amount of settling that we have experienced.

There are other design improvements that could be made. Two of the bathrooms are against the exterior walls. Simply flipping the layout left-to-right in these bathrooms would have put the plumbing (water supply lines) inside the house, rather than on the exterior wall, and would have eliminated the yearly concern over the pipes freezing in the winter. 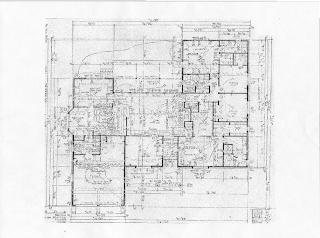 The house is nearly 3000 square feet. While that has been fine with two children, we chose a one-story design, in part, to allow us to grow old in the house. But without the children, the house is probably too big for just the two of us, and it is not easy to shut off the unused wing of the house.

But, all in all, the house has worked quite well over the years. I would like to think that the changes I have made over those years have improved it.
Posted by crazyjim at 7:42 AM No comments: