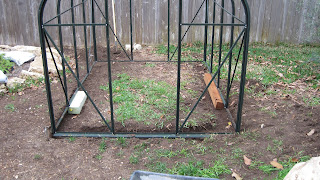 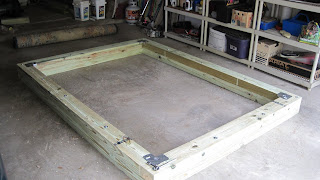 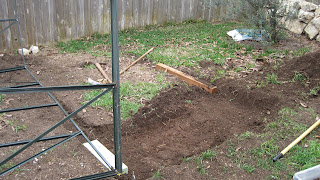 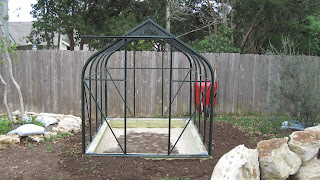 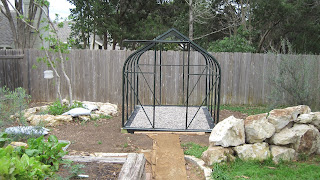 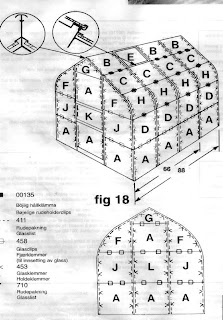 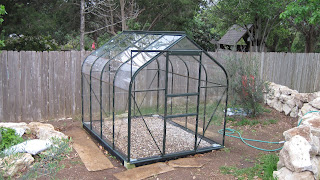 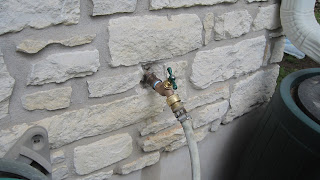 The dirt was delivered this afternoon, about 3:30. Three cubic yards. 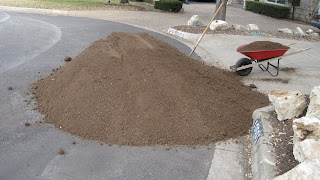 I ordered more than was needed for the North Bed itself; I only put about 2 inches in depth on the North Bed, which comes out to about 1.2 cubic yards. But the minimum delivery is 3 cubic yards.

I put the rest on either side of the walkway, in Zone 2 or in the part that will become the lawn. Areas that had already been dug up, and have settled. I can either leave it there, long-term, or eventually transfer it somewhere else when that area is finished. 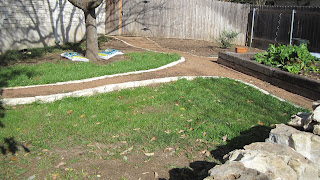 It took about 2 and a half hours to haul it all from the street to the back yard and distribute it around. 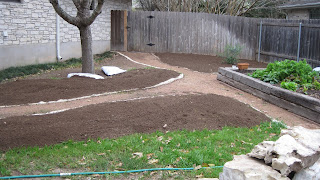 It's supposed to rain in the next couple of days, so I wanted to get this in before it rained.

The North Bed has an olive tree in the middle. My idea is to carpet the rest of it with lavender. Lavender is a perennial, so it will be there year after year. It is supposed to be hardy and drought-tolerant.

I bought 4 or 5 packs of lavender seeds from Amazon.com, and then planted them in areas of the North Bed. The instructions say they will germinate in about 20 days.
Posted by crazyjim at 7:43 PM No comments:

We have dug up a bunch of rocks. Linda thought we should keep them, so I piled them in the back yard. 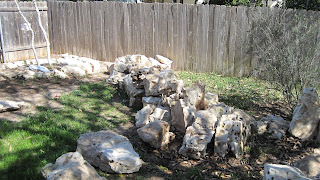 From that Linda got the idea of building a rock wall separating the South Bed from the lawn.

We started at the end near the fence, selecting rocks that were big enough and shaped for stacking. We scattered the rocks over the yard, to make it easier to see each one. 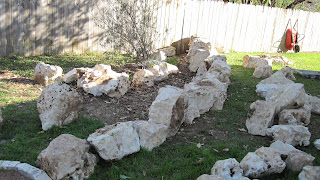 We continued across the yard to meet the corner of the walkway at the raised garden. The idea was to make the wall two or three rocks high. It took about two days of moving, selecting, positioning. 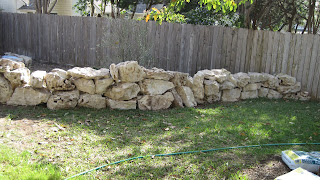 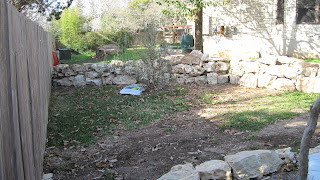 We've moved the surplus rocks out to the front curb, to get rid of them. 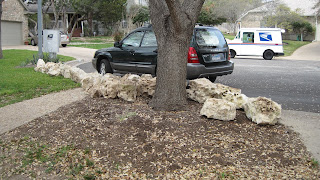 Posted by crazyjim at 8:47 AM No comments:

I want to get my lavender planted in the North Bed, and before I do that, I should put in the irrigation. I have a supply line already run to the corner of the bed. I want to use the underground drip irrigation, like I did in the herb and iris beds.

First, I have to clear off the bed. Over the winter, I had bags of manure and rocks stacked on it, and Linda had put the leaves from the trees there. I moved all that off and cleared it to just the bed. 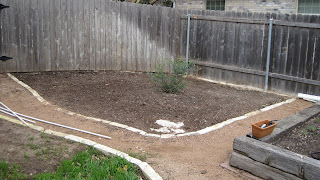 I measured the bed and laid out where the drip irrigation lines would go. The lines are 18 inches apart. I used examples from the Rain Bird documents on underground drip irrigation. I still had plenty of the drip lines from when I put it into the iris and herb beds. The Rain Bird document suggests a supply line up one side and a flush line at the other end. A valve at the end can be opened to flush out the lines, or closed to allow the drip. 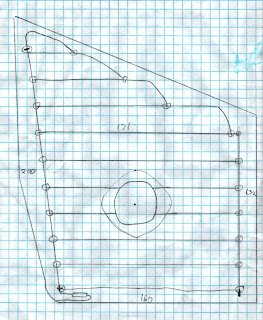 With this layout, I can now see how many joints of what type, to buy the necessary connectors.

Then it is a day of cutting and connecting to create the irrigation system. 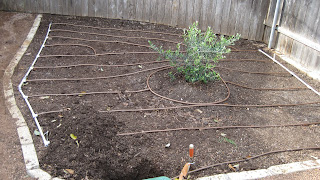 At the corner, where the supply line comes in, I put in a filter and pressure regulator. Since I may need to clean the filter, I put these two in a box. 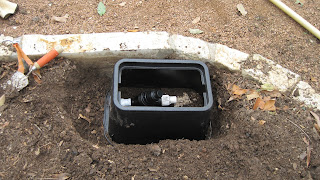 At this point, it became obvious that the final connection between the output of the pressure regulator and the rest of the system would need to be made at the right height (or depth) underground. My plan was to put the drip lines 4 inches underground and then add 2 inches of really good dirt on top of the bed. This would give a good soil mix to start the lavender plants. So I needed to bury the entire irrigation system 4 inches under the ground.

While that was doable, with difficulty, it was the most complicated and difficult of the tasks for this job. In retrospect, I should have dug the trenches into the bed first (4 inches deep) where I wanted the drip lines to be, and then assembled everything in the trenches.

But in any case, I got the lines buried, and was able to make the final connection between the irrigation supply line and the array of drip lines. 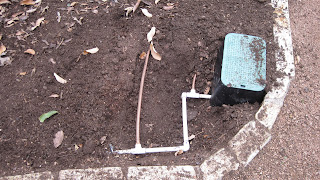 Once that was done, I could bury the whole thing. 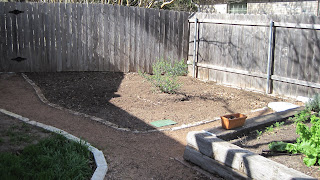 I'm ready now for 2 inches of good dirt on top of this bed. Given the size of the bed, this works out to about 1.2 cubic yards.

I had previously bought Grower's Mix from Austin Landscape Supplies for the raised bed, and that seems to have worked well. So I ordered another 3 cubic yards (minimum delivery order) of Grower's Mix ($35/cubic yard) plus delivery ($70) plus tax for a total of $189.43 to be delivered on Tuesday. This should be 40% compost, 20% sand, and 40% loam.

I also considered Hill Country Garden Soil from John Dromgoole's Natural Gardener, but at $46/cubic yard, it's more expensive, and the web site doesn't really say the blend. Whittlesey Landscape Supplies (where I have been getting the decomposed granite and rocks) has a Garden Mix, but it's only 33% compost, 22% sand, and 45% loam (plus delivery is more).
Posted by crazyjim at 1:13 PM No comments: