Fixing the Diverter Valve for the Central Bathroom Shower

With our grandson, it seems easiest to throw him in the bathtub, and use the shower spray to wash everything off when he gets dirty.  This involves first getting the hot/cold water temperature correct and then switching the water from the tub to the shower, using the middle handle. 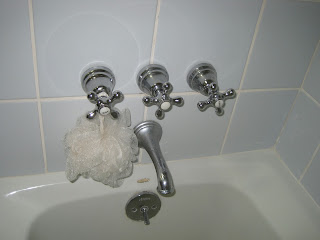 But for several months, turning it from the tub to the shower, while it does provide some water from the shower, mainly still means most of the water is going to the tub.  So we think the shower diverter valve needs a new washer or something.

Taking it apart, we remove the handle and unscrew the escutcheon to reveal the diverter value. 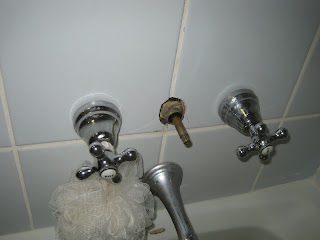 Using a big wrench, we can remove the value to leave an empty hole in the wall, going to the shower structure itself. 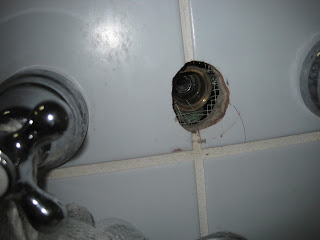 The valve stem has two white-ish plastic washers, one of which seems to have broken into smaller pieces of which we have only a couple pieces (on the paper towel to the left of the valve stem).

Otherwise, things look okay?  So we need a new washer.  But we don't know the actual size or where exactly it goes. 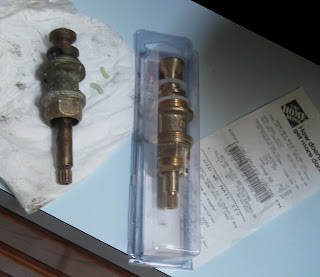 But we were told, I think, that our fixture is from France, so it is unlikely that a U.S. diverter valve will work.  Still, we can see the two similar washers on the 132410, and we cannot find just the washers anywhere, so we buy the whole thing and use just the washers.

(I've highlighted the washers in red in the image on the right above.) 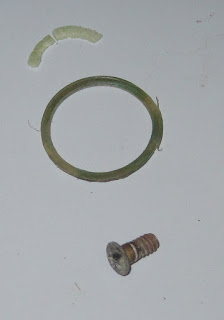 The larger washer that was replaced measures 1 inch interior diameter and 1 3/16 exterior diameter, and maybe 1/16 inches in depth.  The smaller washer, we don't have a measurement for.

Posted by crazyjim at 3:05 PM No comments: