With the dirt down, the next step is grass.

We could wait until the Fall, but that would mean a bare dirt back yard for the whole summer.  The weather prediction is for rain this whole next week, so we figured we would try to rush it before the rain.

The last time we bought grass it was Zoysia Palisades from the Grass Outlet.  A rough calculation with the area calculator on their site suggests 1.6 pallets, which since it sells only full pallets, is 2 pallets.  A pallet covers 450 square feet.  We ordered from them, with delivery on Saturday.

The grass arrived on Saturday at 12:00 noon. 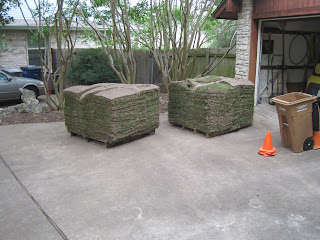 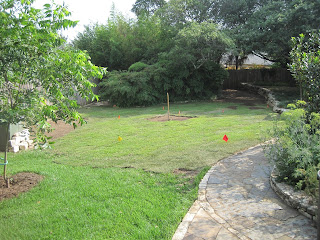 It took the entire 2 pallets, none left over.  This is with leaving a bed area along the fence from the green electrical box for Linda.  We will extend the bed to the East of the electrical box too, by ripping out the grass that is already there.

Once the grass was in, it appeared to me that there were holes and gaps in the sod and some sod pieces were really thin, so I thought it would be good to top-dress the new sod with dirt.  I got a cubic yard of professional mix from Whittlesey and spread it on the new grass, raking it down so that the grass is still visible.  Hopefully the rain/watering will wash this down to the roots. 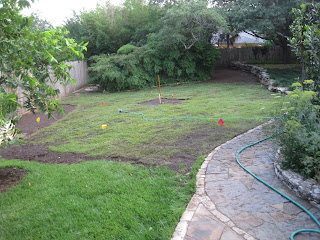 It took an afternoon to adjust the height of the sprinkler heads to adjust for the depth of the dirt and grass put on the lawn.  Some of the heads were about 6 inches underground. 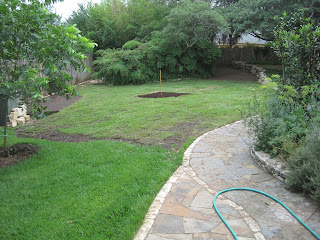 Dirt for the Central Backyard

With the irrigation system installed, we can now get dirt to fill in the backyard, replacing the rock that has been removed.

As before, we are getting Professional Mix from Whittlesey Landscape Supplies in Round Rock.  We had been bringing in 8 cubic yards, but in this case we ordered 12 cubic yards.  With an $80 delivery charge, this comes to $568.12.  It was delivered at about 1:00 PM on Monday. 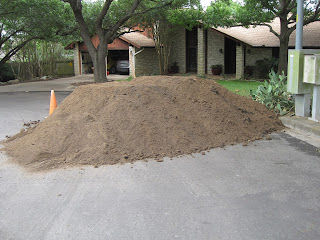 After about 10 hours (5 hours on Monday and 5 hours on Tuesday) of shoveling the dirt into the wheelbarrow and carting it around back, spreading it in the central backyard, this is done. 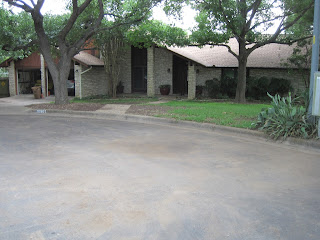 The backyard starts with the combination of leaves, grass and dirt that was there in the beginning. 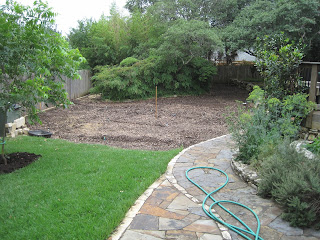 After the first 5 hours, we have a strip closest to the established lawn, and along the back fence partially filled. 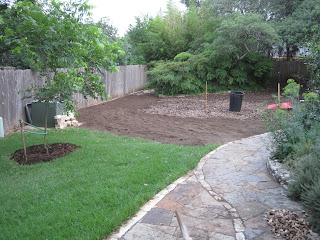 And after the next 5 hours, we have a strip that goes all along the sidewalk over to the irrigation valves for Zone 6 and Zone 7, extending about halfway across the yard to the fence. 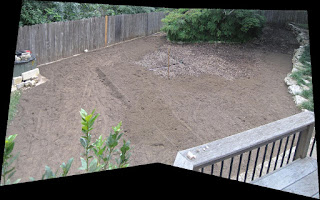 We spread 3 full bags (3 cubic feet each) of Peat Moss across the central backyard. 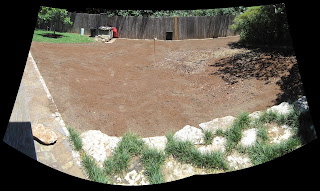 And then another 12 cubic yards of dirt. 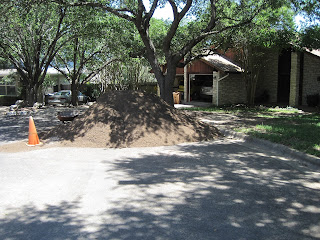 This fills in the back yard pretty well.  But the dirt is dry, light and fluffy.  While we have compressed it some by walking around on it, we thought it might need a bit more.  So we rented a "lawn roller" from Home Depot ($13.10 for 4 hours).  It's just a plastic cylinder on a handle, but you can fill it with water to make it 250 pounds heavy, and then roll it around on the lawn. 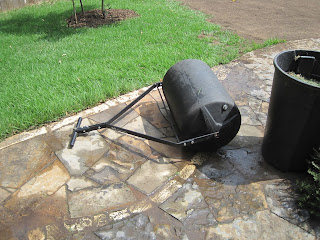 I did one pass horizontally and one pass vertically. 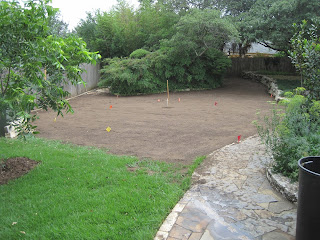 As a measure of the amount of dirt (other than 24 cubic yards), at the stick (where the tree is to be planted), we have 11 inches of new dirt (professional mix) to get the backyard leveled. 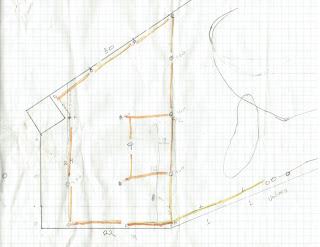 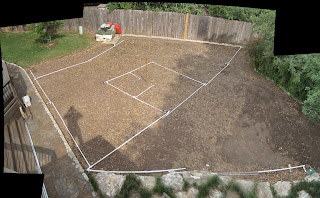 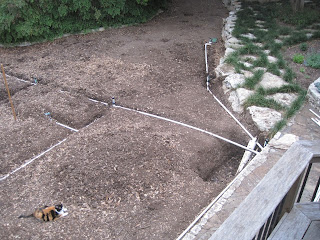 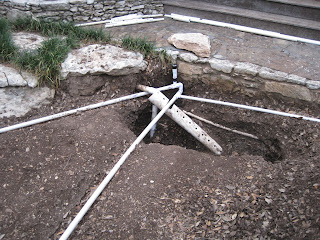 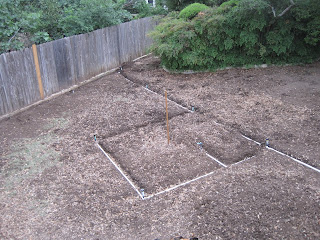 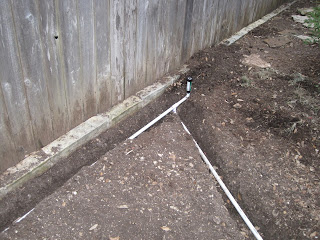 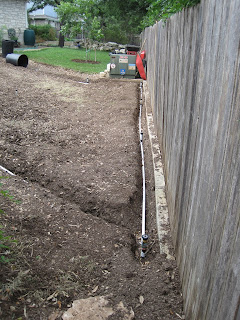 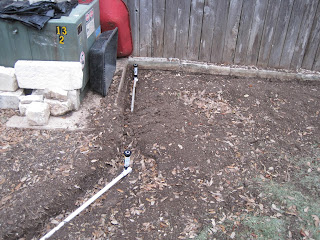 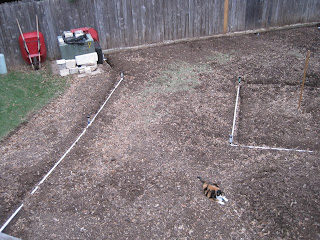 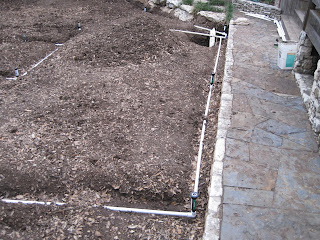 Having finished the excavation of all the rock in the backyard, the next step is to install the irrigation system for the backyard.  We have kept two zones, 6 and 7, from the previous layout for this purpose.  Zone 7 will be the Bottoms; Zone 6 will be the central backyard.

Since we have not yet put the final layer of top soil on these areas, the idea is we can install the irrigation, and then cover it with the top soil.  For the Bottoms, that seems to not be true.  It is mostly filled in, and while we were excavating the central backyard, settled.  So we have to trench it. 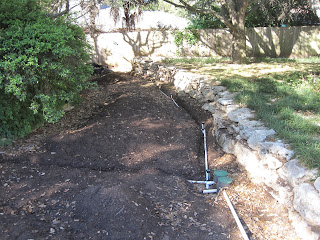 There is one exception.  At the widest point, the entrance to the Bottoms next to the irrigation valves, it seems reasonable to put a head next to the Jungle, since these heads spray not only the Bottoms, but out into the central backyard in the transition from one area to the other. 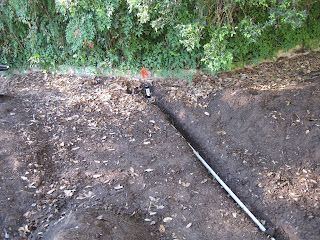 This results in 6 heads for Zone 7, one head next to the Jungle and 5 spaced out along the Retaining wall from the valve to the fence, approximately 10 feet apart.  All of the line is 3/4 inch PVC.  The pipe, fittings, and heads ran $76.81 at Home Depot.

Once the lines are laid, and cemented together, we can bury all of this with the pile of good soil that we have left over.  We will need additional soil, but this is a start. 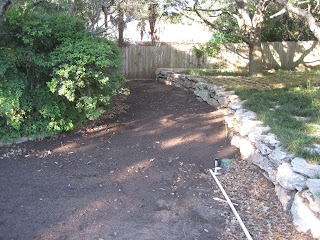 Posted by crazyjim at 4:42 PM No comments: