We have done little for the Bamboo Grove since it was finished in 2010 and it has required very little maintenance. But in February 2021, we have a week of freezing temperatures with it getting down to single digits and not all the bamboo survived that.  It took time, but a year plus after that we found that some stalks had died and fallen over. 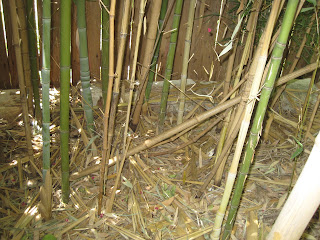 We extracted a large pile of dead bamboo from the Bamboo Grove and cut it into 6 foot pieces and put it out for the City to pick up with lawn clippings and leaves. Others appear to be dead too, but are still firmly rooted into the ground, so we'll wait for those to fall over.

But  it is difficult to get in to the dead stalks -- there is bamboo everywhere.  So we decided to cut a path thru the Bamboo Grove, to make it easier to get in and remove dead bamboo.  We started near the area behind the Jungle, where we are growing a new Oak tree (from an acorn). 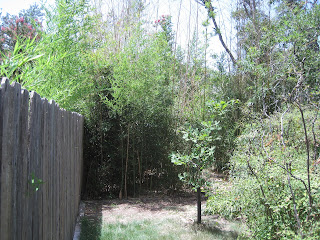 We used the chain saw to cut down some bamboo stalks, to define a path that we can take into the Bamboo Grove 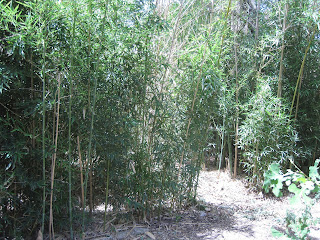 and continued that thru the Bamboo Grove 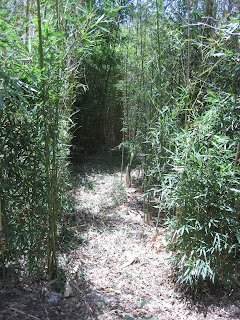 and then turned right and continued to the Blue Rock Pool. 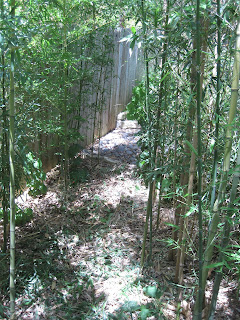 We used the hedge trimmers to cut off small branches and leaves that pressed in on both sides of the path.

That produces a large pile of bamboo on the driveway that we will need to cut down to smaller pieces and get rid of. 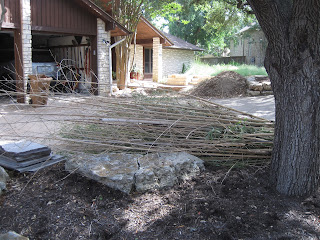