A Larger Picture of the Bottom part of the West Lawn

The bottom part of the West Lawn is mainly dominated by the big live oak tree.  That and the turn of the River of Rocks, around the corner of the house and over to the steps coming down from the deck.

In trying to define the River of Rocks, it seems that this area slopes downhill quite a bit.  There are big roots for the live oak that run along the ground, and we have had a significant problem of dirt being eroded and washed down into the pool of blue rocks and the Bamboo Grove.

It appears to me that it can be significantly improved by putting in a terrace wall.  A terrace wall would allow me to add dirt to the base of the live oak tree, while at the same time keeping the ground mostly level.  There should be less run-off erosion with level ground.  And the River of Rocks would be able to decrease slowly from the corner of the house to the back deck, rather than decrease a lot and then come back up some.

We thought about building it from 6x6 limestone blocks, like we used for the raised garden, but Linda suggests using natural rock instead.  So we need to come up with a short rock wall of native rock.  A terrace wall of about 24 inches seems like it would work best.

This would partition the bottom part of the West Lawn into two pieces -- upper part around the base of the live oak, and continuing over to the River of Rocks, and a lower part that would stretch from the fence between the Jungle on one side and the terrace wall on the other back to the center of the back yard. 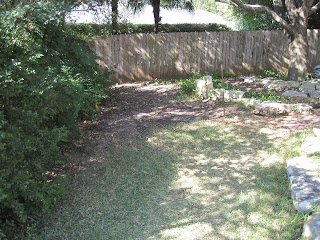 This tongue of yard should be fairly level, from side to side instead of it's current slope down.  We have already excavated the part closest to the fence, but will still need to dig down for most of it.  If we encounter the rocks that we would expect, as we have found in the rest of the yard and in the part near the fence, we should be able to use those big rocks for the terrace wall.  And we need the terrace wall to define the level of the soil behind it, from the terrace wall  around the live oak tree and back up to the main West Lawn.  And we need that level before we can put in the irrigation lines for this section (Zone 8).

So it seems this is the next part of the yard to dig up.  Then define the terrace wall.  Then fill in the ground behind the terrace wall.  Put in the new Zone 8 irrigation lines and heads. Then continue the River of Rocks around the corner of the house to the deck sidewalk.