Our current A/C system is a Lennox system that was installed in 2002.  We had a lot of trouble with it after it was first installed.  It seemed that every year there was on major problem after another.  But they were all mostly under warranty.  But it was clearly not a reliable system.  The first A/C system had come with the house, so it was 16 years old when it needed to be replaced.  This Lennox system did not appear that it would last past its 10-year warranty.

As it got older, the frequency of major repairs decreased.  Still, we expected to replace it as soon as it died after the warranty expired. No more throwing good repair money after an unreliable system.  The warranty expired in 2012.  By 2016, I figured it was bound to be on its last legs, so I contacted three A/C companies and got quotes.

Finally, in 2020, it died.  But it did make it thru the summer and waited until the middle of October before I came home from a walk, noticed the house was warmer than I thought it should be.  The fan was running full speed, but the air was not cold; not even cool. Stan's Heating, Air & Plumbing came out the next day and determined that their was no coolant in the A/C coils.  Since it had been working well just the day before, it apparently had suddenly sprung a leak, somewhere.  Putting new coolant in the coils would not fix the problem; it would just leak out again.

So we went back to our estimates.  Unfortunately, they were 4 years old now.  We had been quoting a Trane system.  One of the companies did not even carry Trane anymore.  So we went to the Trane website to find the Trane shops in Austin.  One of them, Service Wizard, had been positively mentioned on NextDoor enough that I remembered it.  I called them; got another estimate, and that estimate was in line with the earlier estimates, so we went with that.

We were quoted a 5 Ton Trane XV20i with an XV80 Gas furnace, around 20 SEER. Extras were a Honeywell 4" media air cleaner and an in-line duct booster.  A duct booster is basically a fan that sits in the duct work and blows more air thru it.  That was selected as the way to handle the problem that the East side of the house (with the kitchen) is typically much warmer than the West side (with the thermostat).  (The correct solution to this is a two-zone system, but that would require a substantial tear out and replace of the duct work, and a whole new A/C system (and place for it) for the East side.)

The first hitch was that the furnace was not available.  For whatever reason, it would be at least two weeks before a furnace was here.  But the weather almost no longer needed A/C, so we could wait.  After all the old gas furnace still worked if it got too cold (which it did).

Finally, the furnace unit arrived, and we were scheduled for installation on 3 Nov.  On 2 Nov, I went up in the attic and cleared the insulation away from where the booster fan would be installed. 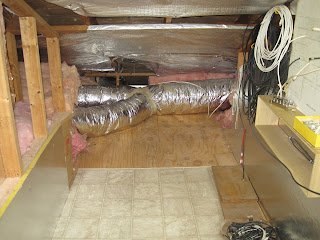 And since they would need to run a control wire from the new A/C system to the booster fan, I cleared out the insulation above the utility closet in the hallway. 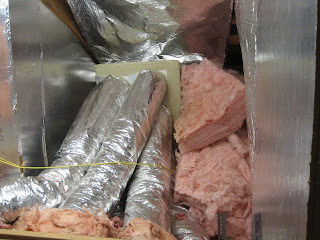 The second hitch came on the morning of 3 Nov, while I was waiting for them to come install the system.  One of the owners said that the new system was top of the line, and all digital.  Which meant that they could not get a signal out of the system to indicate that the fan was running that would control a booster fan.  They could put a booster fan in the duct work, but it would need to be turned on and off manually, which made no sense to me.  So we dropped the idea of the booster fan.  We currently get that effect by having a 20 inch box fan sitting on the floor in the living room; it effectively runs all day.

Once that was settled, the workmen arrived about 9:00 AM.  First they took the old system out. 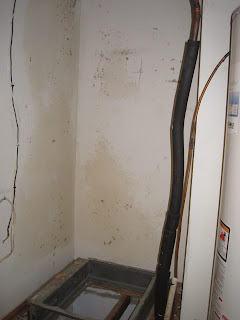 and put in the new one. 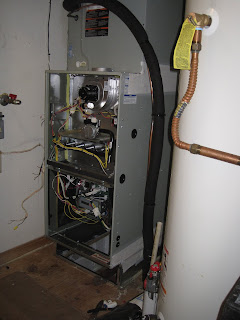 Similarly they removed the outside Lennox system and put in the new Trane condenser.  That seems to be Model No. 4TTV0060A1000CD, Serial No. 20401L7T1F. 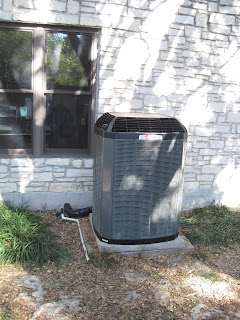 They had to replace the electrical box on the wall behind the condenser.

And we have to use the Trane thermostat. 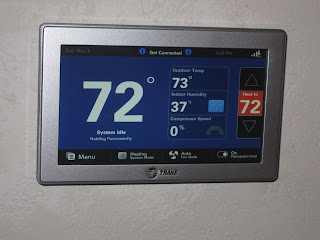 which is a touch screen with a whole bunch of menu options. 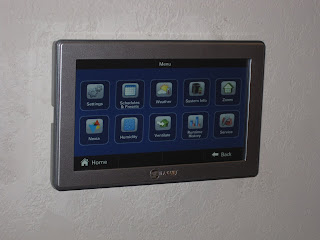 The Nest thermostat that we installed in March is no longer needed.

This whole system cost $12,282.00 from Service Wizard Heating and Air Conditioning, and includes a 10-year parts warranty, but only a 1-year labor warranty.  Registering the whole system at Trane.com says the warranty expires 11/03/2030, except for the compressor which goes another 2 years to 2032.

Update from 22 Nov 2020.  Since the booster fan was not installed, the effort to clean up the attic and expose the duct work was unnecessary, and reversed.  In doing so, we went and bought even more insulation -- unfaced R30 fiberglass batts -- and installed one roll over the dining room 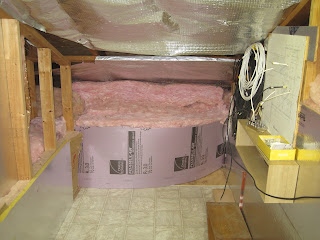 and the other over the closet that holds the A/C and furnace unit covering all that duct work under feet of fiberglass insulation. 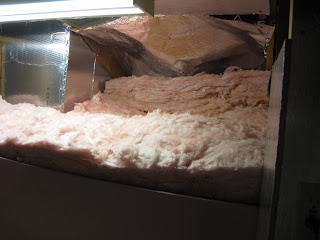