The house is a one-story design with a 100% stone veneer exterior. Partly that was required by the Deed Restrictions for this subdevelopment; partly it was because we wanted to minimize the cost of maintenance for the house. No painting the house. Long lasting.

But it is not all stone exterior. The areas above the windows, the doors, the garage doors, are all a cedar wood siding. Rough cedar -- I would have preferred a finished surface which would have a wider range of finishing options, but there was no choice. I assumed finished, and the builder assumed rough, and with no communication about it, I showed up one day and it was all up. And rough.

The other area of wood siding is the gables. Although the house is one-story, the roofs peak on either end, and over the garage and the back and the roof peak is about 2 stories above the ground. There is a triangular wall area here, and this triangular area has a wood siding. 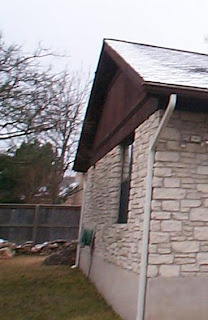 The builder, instead of using real wood for these gables had put up some kind of plywood siding. It looked really tacky, and was not weathering well. And this was only a year after it was put up.

So we decided to put a real 1x8 "lap&gap" cedar over the top of this plywood siding. I tried to do this myself. I bought the wood $318.36 from Stripling Blake. But it's fairly difficult to get to this area. I should have rented some scaffolding, but even with what I had, I worked on it all day (Memorial Day) and got nowhere. It was clearly time for a professional; I was out of my league.

We contracted with Gary Simon to do the work (Simon Construction). He did a great job. He used the material I had already bought, but rented some scaffolding and probably had a helper. $1088.30.
Plus, of course, $30.35 for trim and $78.17 for some 2x6's that were useful as part of the scaffolding.

Lesson learned: There is a limit to what I can do myself. Sometimes it just makes a lot more sense to hire a professional. I can do reasonable simple stuff, but to get a good job -- particularly for something that shows like stone work or carpentry it helps to have the proper tools and experience.

I can learn the skills, but it can take some doing. I learned basic framing redoing a garage when I was a graduate student, and could leave my mistakes behind when I left school. I learned to do sheet rock work when I worked on my brother-in-law's house, so I didn't have to live with my mistakes. I learned to do PVC sprinkler work on this house, but almost everything is buried, so it isn't supposed to show.
Posted by crazyjim at 1:31 PM No comments: 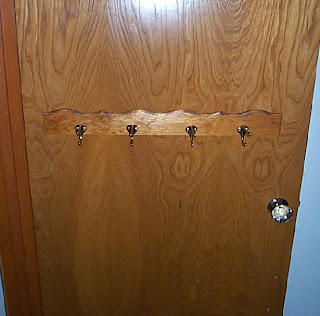