A leak in the Zone 3 underground irrigation system

Linda found a wash-out near one of the rose bushes, and by turning on Zone 3, it was clear that this was a leak.  Digging down at this spot, it appears that a T-connector had broken -- not sure why -- and would need to be replaced. 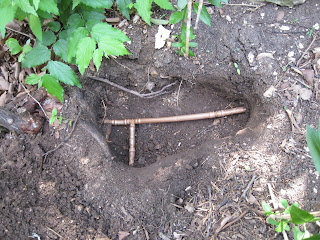 This required cutting out the T-connector and the attached tubing and splicing back in, using straight connectors, a new T-connector.

Flushing the system and trying it out, showed another leak at another location, on the other side of the rose bush, where Linda had planted a milk-weed plant.  That was just in a straight part of the tubing.

And fixing that one, and then testing the zone, showed a third leak, a bit further from the other two. 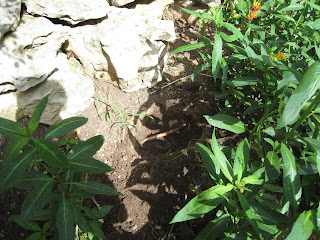 This repair was just cutting the leaking part of the tubing, and then inserting a straight connector into both ends.  It leaks a bit, but that's what drip irrigation is supposed to do, so we won't worry too much about it.